No ‘Quit’ at Charlotte Fanfest

CHARLOTTE, N.C. — The theme of the first day of the Mid-Atlantic Legends Fanfest was “I Quit.”

But none of the featured guests did.

For more than two hours, Magnum T.A. and Tully Blanchard relived their famous 1985 feud, which culminated in an “I Quit” match in a cage at Starrcade ’85 in Greensboro, N.C.

Not to be outdone, legendary manager Jim Cornette delivered an over-the-top performance for about two and a half hours during a fan give-and-take, bouncing from his view of Ring of Honor’s Kevin Steen to weight loss. 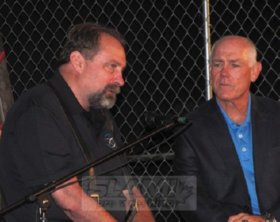 Magnum and Blanchard had never shared the same stage to share memories of their rivalry and the match, conducted inside a cage. They said they’re proud it has stood the test of time.

“It was an appropriate end to the intensity that feud had,” said Blanchard, noting that WWE saw fit to include it on a video of great cage matches. “That summer and that time was just phenomenal.”

Added Magnum: “Every time I stepped in the ring with Tully, I had to take it up to my highest level. … He got me in the greatest shape of my life and also the greatest intensity.”

In fact, Magnum’s intensity and concentration were so high that he missed his cue to go to the ring. “I was ahead of you,” he laughed at Blanchard. “You came to the ring and there I stood.”

The bout’s denouement occurred when a jagged piece of table leg fortuitously broke, giving both men a weapon with which to main the other. Magnum won the match as he appeared ready to impale Blanchard’s skull.

“We couldn’t have scripted that out. Nobody had any idea what that chair was going to produce,” he said.

Blanchard noted that he never said the words “I Quit.” He responded “yes” when the referee asked him if he wanted to submit.

Since the magic words never passed his lips, moderator Mike Mooneyham, a Charleston, S.C.-based wrestling author, jokingly asked whether a rematch might be in order.

That won’t happen, of course; Magnum suffered life-threatening injuries in a 1986 car accident that ended his wrestling career. The biggest applause of the night came as he described his determination to overcome what doctors described as a “million to one shot” to walk again.

“I was determined I wasn’t going to fail, wasn’t going to quit, wasn’t going to get in my pity pot,” said Magnum, who nonetheless still lives with the pain. “Now, getting up out of the chair and taking 15 steps across the room is taking more effort than anything I’ve ever done with Tully.”

The two men said they are closer than ever — Magnum, who lives near Charlotte, is married to Blanchard’s ex-wife. But Blanchard, who resides in Texas, said the good guy has been a true stepfather and good role model for his children.

“We share something today that most people can’t even imagine — an extended family,” Magnum said.

About 50 pounds lighter thanks to a healthy lifestyle, Cornette discussed the circumstances of his departure as booker and executive producer in the Ring of Honor promotion. Steen didn’t help; though Cornette hailed him as a terrific talent, he said he was next to impossible to deal with.

Cornette wanted to bring a more athletic style to ROH, and wanted to repackage the hefty Steen as a lean, 235-pound main eventer. “It will be better for your health and it will fit what we’re trying to do,” he recalled telling Steen.

Steen lost some weight, but offended at the pace of the program, he regained the poundage and then some, and decided to tell the back story of his booking on a DVD that the promotion quickly yanked.

“He works very good and he talks very good, but he doesn’t know everything and he won’t do what you tell him without a lot of [expletive] whining and complaining,” said Cornette, adding it was unprofessional to consider knocking the booker, promoter, and ROH on a company-authorized DVD.

Cornette, who also put in time at TNA, said he thinks that promotion is staggering and pointed at the leadership, including Dixie Carter, head of the company. “Dixie Carter doesn’t know shit from apple butter about wrestling and she’s listening to the wrong people,” he said. “It’s sad because no one is ever going to spend that much money again” to oppose WWE.