TORONTO — The first-round match for the Ring of Honor World title between BJ Whitmer and Mike Bennett came to an abrupt halt Saturday night in Toronto when Whitmer was hurt on a piledriver on the ring apron.

It was the third match of the card at the Mattamy Athletic Centre (formerly Maple Leaf Gardens), and Whitmer and Bennett had had a competitive, even-matched bout.

Bennett got Whitmer up for the piledriver along of the north side of the ring, on the apron, and delivered. Whitmer’s head was too low. 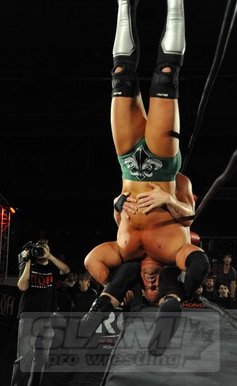 SLAM! Wrestling photographer Mike Mastrandrea was at ringside and said Bennett immediately knew that he had erred.

“He went, ‘Oh my God, I’m sorry,'” said Mastrandrea, who witnessed Whitmer convulsing and fighting to get his breath on the padded floor at ringside.

Bennett stayed at Whitmer’s side the whole time, as did the referee; Bennett’s manager Maria Kanellis had been ejected earlier.

Emergency personnel came out to help, along with Davey Richards, who also has emergency training, and Jay Lethal.

It took about 15 minutes until Whitmer was taken out. He managed a thumbs up for the crowd at ringside.

The audience was kept abreast of Whitmer’s condition, and by the time the show ended, fans were told that he had been hospitalized and was being seen by a doctor.

Following the card, SLAM! Wrestling learned that Whitmer, a native of Kentucky, will be kept in a Toronto hospital for 24 hours and is being treated with a painkiller.

Ring of Honor is keeping fans up to date at its Twitter account: @ringofhonor, and the latest post, as of 12:30 pm ET is: “BJ is currently undergoing tests at the moment, but does have feeling and movement in his arms and legs.”