Waltman’s look at WWE in 1994 is insightful

Kayfabe Commentaries looks back at 1994 in the WWE with Sean Waltman is a very insightful two hour-plus interview that provides viewers with a very intriguing view of what life was like in a year that the company had to transition to the post-Hulk Hogan era. 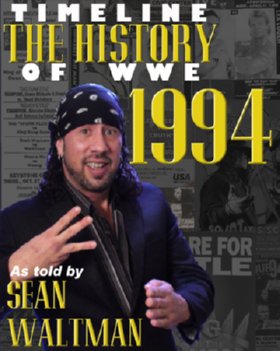 Some of the overarching elements that hung over the WWE in 1994, which Waltman gives a lot of details on, are the McMahon steroid trial and the downturn in the company’s fortunes. Listening to Waltman it is apparent that for much of the year, with McMahon preoccupied with the steroid trial, a lot of the running of the company was left to various other individuals and that this tended to reflect on the television product in terms of its quality and execution.

One of the more fascinating tidbits is how both Bill Watts and Jerry Jarrett were each brought in on a trial basis to see how they would handle running WWE. Waltman states that it was apparent that this action by McMahon was done as a contingency plan in case he lost the steroid trial and could no longer run WWE. Hearing this provides a real appreciation of how much concern there really was with respect to the steroid trial and how if McMahon had lost what direction the wrestling industry might have gone in.

Also, detailed quite heavily is the role of the various road agents in WWE in 1994 and how they could impact the product. For the average fan who has maybe wondered about why WWE has made such odd decisions over the years, Waltman’s discussion on the WWE road agents will be a real eye opener about how things work within such a large international company and how certain choices are arrived at.

Yet, it is Waltman’s memories and opinions on how 1994 was in a downturn period for the company that may be the most intriguing. From various other lawsuits and incidents, the WWE’s failed attempt to push Lex Luger as the next Hogan, the rise of WCW, to a company decision banning the use of chairs or talking about beating up your opponent, the interview gives a real idea of several elements that resulted in the company moving into smaller arenas by the end of the year. The topic is very thoroughly explored and by the end questions about why the WWE was in a downturn become very apparent.

Throughout the interview Waltman does an excellent job explaining what various wrestling personalities were like to deal with and what the pros and cons of each were. Additionally, Waltman details why several angles didn’t work, such as the infamous Undertaker versus Undertaker match at SummerSlam 1994, and how his own career progressed during that year.

One of the more enthralling figures that Waltman discusses is Scott Hall, whom Waltman states was in many ways the centrepiece in terms of how to put a match together. Unfortunately, while several minutes are given to Hall’s importance in the development of Kevin Nash, Shawn Michaels, and Waltman, a more lengthy examination would have been a good idea.

Another topic where a longer discussion would have been interesting is the fact that 1994 marked Tammy Sytch’s debut in WWE. As Sunny, Sytch became one of the most prominent female wrestling personalities that the industry had seen in years. It is surprising that all that’s really discussed is whether or not she received any special treatment or not.

As well, a topic completely missing from the interview is what Waltman had observed in terms of the tension between Bret Hart and Shawn Michaels in 1994 and whether he felt at the time it would get worse. Being that 1994 marked a time where Michaels, Nash, and Hall were being given more prominent roles in the company, a discussion on this topic would seem to have been warranted. Alas, the closest the interview gets into this area is when Waltman discusses whether he had any issues with Bret Hart, which Waltman states he didn’t, and after which the topic is dropped.

Despite these preferences though, Kayfabe Commentaries’ Timeline: The History of WWE — 1994, As told by Sean Waltman is a solid look back about a very important year in wrestling history and one that will leave you with greater insight.