MONTREAL – Jacques Rougeau Jr. revealed that he has been the subject to a death threat in his hometown of Rawdon, Quebec. 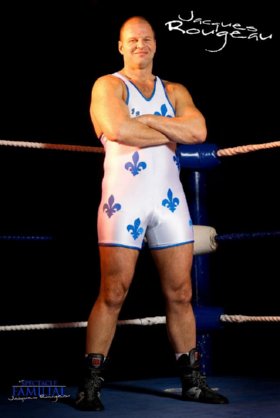 According to a post made by Rougeau Jr., on Thursday afternoon, someone showed up at the one of the properties owned by his father, Jacques Rougeau Sr. and his brother, Raymond.

The tenant, whose name was not mentioned, answered the door and faced a man, described as having brown hair, around 5-foot-8 with a 3/4-coat, asking for Jacques Rougeau (meaning Jr.). The tenant said no, and the suspect asked if he knew where Rougeau Jr. lived; again, the answer was no. The suspect allegedly opened his coat, just enough so the tenant could see his 12mm gun and told him to tell Jacques that he was looking for him.

The tenant called his landlord, who called Raymond; the father patriarch called Junior to let him know.

The first thing Jacques Rougeau Jr. did is to put the incident on his Facebook page.

“I have more than 5,000 friends on Facebook and have a very good relationship with them,” said Rougeau this morning in an interview with 98.5FM, the biggest Montreal radio station.

Obviously, many of his Facebook friends told him to call 911, which he did.

“The police told me not to sleep at my house, so I went to the movies with my son and my girlfriend.”

Jacques Rougeau Sr., 83, didn’t want to file a complaint, but Jacques Jr. met with the provincial police and an investigation has begun.

“I have no enemies. I’m involved in non-violence stuff, it sure has no link to that,” said Rougeau Jr. “And I know I was a bad guy for some times in wrestling, but I can’t see it being the reason.”

Jacques Rougeau, 53, is obviously nervous about it, but tried to play it cool.

“He went to 12th avenue and I’m staying on 18th avenue. Everybody knows where I live in Rawdon, I don’t understand why he showed his gun if he really wants to kill me. I don’t know if the police will be able to find him. Do you know how many guys fit that description?”

A few months ago, on a radio talk show in Quebec City, Jacques Rougeau Jr. had some unkind words for the gay community, essentially mixing up paedophilia and homosexuality. He received a ton of heat for his comments and has already apologized.