Tinker Todd, dead at 85, was a master storyteller

Few could spin a yarn like Tinker Todd. When recounting his wrestling days to a writer, or penning his always entertaining — and never sacrilegious — “The Gospel According to St. Tink” columns for the Whatever Happened To … ? newsletter, he entertained. With his death on Sunday, the world is a little less colourful.

Whether he was under his birth name, Ramon Napolitano, or as Danny Knapp, which he was known around Mooresville, NC, as, or as any number of his wrestling aliases — Tinker Todd, Mr. ??, Oliver Winrush, Ray St. Clair — the man could enrapture an audience. 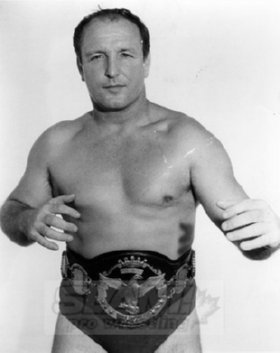 “We’ll miss seeing him sit in his chair, with barking little dogs on his lap, at his feet and on his shoulders as Danny spun another yarn,” reads his obituary.

Here’s a good example. He had a hand in Billy Two Rivers, the Mohawk star from Kahnawake, getting booked in England, where his exotic look helped make him a star.

In a story recounted in The Pro Wrestling Hall of Fame: Heroes & Icons, Todd recounted Two Rivers’ arrival in England. Dale Martin Promotions had a small apartment for visiting wrestlers to crash in, and Two Rivers and Todd bunked down for the night when a drunk announcer came in, and, mistaking the newcomer’s head for a cat, bounced a shoe off his noggin. “He thinks it’s the damn cat, but it was Billy’s Mohawk haircut,” howled Todd. “Billy hopped out of there screaming and yelling and jumping all over the place. I had forgotten all about that — that was many years ago! He was scared to death. The guy says, ‘We’re being attacked by Indians!'”

Two Rivers and Todd became great friends, travelling the United Kingdom together, sharing a love for British history. They kept in touch over the years.

That travel was a big part of who Todd was, and in an interview in March 2011, he summed up his decades as a pro wrestler: “You get a great education. You get to know human nature. I was never one to sit in a hotel drinking a beer. I used to get out, wherever I went.”

On one wrestling tour of Japan, he found himself in Hiroshima, and all the boys just wanted to sleep in, but he and Jerry Brisco headed out to see the memorial to the atom bomb.

“He was an adventurer, world traveler, pugilist, pro-wrestler, fitness fanatic, creator of historical artifacts and raconteur,” verified his obituary.

Ramon Daniel Napolitano was born February 2, 1928, in London, England. His father specialized in working with marble and terrazzo mosaics. When Ramon was only three years old, the family moved to Australia, and returned to England in 1939, just before the outbreak of World War II. Like many kids during the war years, he spent a lot of time in the athletic clubs in Britain, designed to keep the boys occupied while the men were at war. There, Napolitano learned the basics of boxing, wrestling, and bodybuilding, skills he would hone abroad.

In January 1946, he was finally old enough to served with the Seaforth Highlanders of the British Army, and spent time in Korea, Singapore, The Philippines, Jerusalem, Malta, and locales in between.

His first introduction to pro wrestling came in Singapore, where Indian and Australian wrestlers would perform. Not too long after, he was learning the ropes as well, but setting a precedence for his many pseudonyms, Napolitano hid his identity to prevent the loss of his amateur status as a boxer in the service.

Back in England, Napolitano when to the Merchant Navy Training School in Newcastle, and earned the skills to serve on ships — initially he was shovelling coal.

Time for another yarn.

While serving on the Queen Mary, he jumped ship in New York City in September 1952.

“I got off the boat, put my washing under my arm, my old clothes, and told the police I was gonna put ’em in a dry cleaners and pick ’em up next time back,” he told Scott Teal’s Whatever Happened To … ? newsletter in February 1999. “I went into town and hid out in the toilets at the 33rd Street bus station. The boat pulled out at 1:30, so I knew I had to keep hid until at least that time. In my pocket, I had approximately sixty dollars. No friends, no money, nowhere to go, didn’t know what I was going to do in a strange country.”

Drifting from Atlantic City to Philadelphia, he set upon Texas as a goal, but got sick on the way, and was dropped off in Charlotte, NC.

“I went into Presbyterian Hospital. That’s where I met my wife. I married her,” he said of his union to Barbara Ruth Kennedy in 1953, with whom he would have two children, Mark Knapp and Julie Helms. “I married a girl, and quickly had a kid so they couldn’t throw me out,” he cracked. In 1956, everything was made legal.

“I was looking over my shoulder all the time. I had a suitcase packed. I was ready to run because they were hunting me down, like they were after Dillinger in my mind,” he dramatized. Napolitano went to the immigration office and gave himself up. While awaiting deportation, his visa kept getting extended since he was showing good faith, and eventually he was allowed to stay permanently. 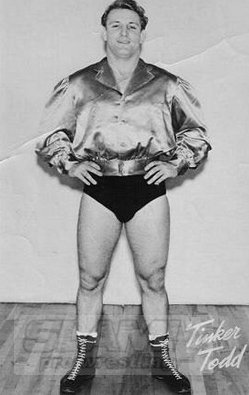 In Charlotte, he met wrestler Abe Jacobs, who introduced him to Babe Sharkey, who was helping Jim Crockett Sr. promote, and became a professional wrestler.

Crockett sent him to Minneapolis while he was still in the United States illegally, and Napolitano figured he could step into Canada and get a visa with his British background.

“So they sent me up to Winnipeg, and by gosh, did I have a police record in England, which I didn’t have, and I don’t have. While I’m waiting for that — that took six weeks, up in Winnipeg, in the cold, November the 8th and it was cold. Finally, I got my visa, February 7, 1957,” he recalled.

During his career, Napolitano would wrestle just about everywhere, but is most associated with the Carolinas, where he homesteaded, and even promoted in competition to the Crocketts for a time, eventually going back to work for them.

He had a great chance to further his career in August 1967, when Roy Heffernan was ousted from the Fabulous Kangaroos, and Napolitano became Ray St. Clair, partner of Al Costello.

“Al called me and I had just come back from Europe. And I thought, ‘Well, I’ll get on up there and do him a favor,'” Todd said in The Pro Wrestling Hall of Fame: The Tag Teams. He knew Costello for years from stints in the United States, Australia, Singapore, and India, and their styles meshed well. “Oh, in that ring, he was a dream,” Todd said. “We worked well together and coincidentally, we had the same style — in and out and so forth, matching holds, telling a story. We hit it off good.” 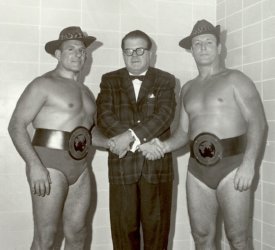 At the time, Costello was 47, but he was still spry from years of taking his conditioning and diet — he generally shied away from meat — much more seriously than his contemporaries. “He was the type of guy that would go out in the morning and cut the grass, and put the grass in the blender and drink it,” Todd laughed. “He would not eat meat, and he would not stoop to eat meat. He was a vegetarian all the way.”

The Costello-St. Clair version quickly made itself known in The Sheik’s Detroit-based promotion, where they captured the territory’s version of the World Tag Team Championship at legendary Cobo Hall. They also toured the WWWF and wrestled at the old Madison Square Garden before it closed its doors in early 1968. They had no trouble recapturing the heat of the first Kangaroos, which led to a night, not in a cozy hotel, but a dumpster. In a tag match in Cincinnati, the Kangaroos bloodied black star Bobo Brazil in front of a crowd that included a large contingent of minorities.

“We got into a riot there,” Todd recounted. “We split the eye of Bobo Brazil and, lord, we could not get out of that ring. And luckily for us, and unluckily for somebody else, someone was either pushed or thrown or fell from the balcony and he came down with quite a wallop. We took advantage of that second or two and we were through that crowd to the dressing room.”

An incensed mob followed them to the backstage area and started pounding and trying to break down the door. So Costello and St. Clair grabbed their clothes, ducked into a nearby alley and jumped into a trash bin for refuge — or was it refuse? “We jumped in there and spent the night in there amongst the potato peelings and the banana peels. It was cold and we must have dozed off. Oh, we were scared to death,” Todd said. Adding insult to injury, when they returned to Costello’s Oldsmobile Delta 88 at daybreak, they found four slashed tires.

Despite the success of the team, a degenerative knee hobbled Todd, and the partnership was dissolved after about six whirlwind months, and he was replaced by Don Kent “I’d gotten homesick and this knee was just killing me. My leg locked on me and there wasn’t much I could do with it for quite a while,” Todd said.

In 1972, Tinker Todd retired from pro wrestling, those knees never having improved, though he did wrestle a few shows around 1976 for the Johnny Powers-run IWA in North Carolina. 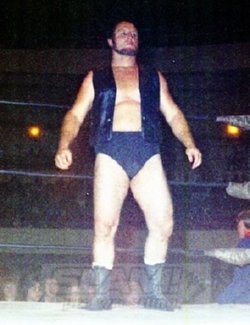 Aside from the in-ring wrestling, Napolitano helped both Billy Two Rivers and Tosh Togo (Harold Sakata) get to England — where Togo would become Oddjob in the James Bond film Goldfinger.

He also worked with Johnny Heidemann training Ric Flair when the future star first came to the Carolinas. “My famous words to Johnny were, ‘This guy’s never gonna make it in this business.'” Todd told Teal. “I remember those words as if it were yesterday. How wrong I was.”

Remembering was something that Ramon Napolitano / Danny Knapp was good at.

“I can remember things fantastically from the age of about two,” he said in 2001. “I can remember our father picking me up, leaning me over the coffin of my grandmother, and kissing her. She had all powder all over her face, and I got it all in my mouth.”

Post-wrestling, he worked as a carpenter, a hobby he continued after retirement, and briefly ran a restaurant. He and Ruth loved their dogs and travelling in their RV.

Ramon Napolitano passed away on Sunday, July 14, 2013 in Winston-Salem, NC.

The family asks that donations go to the Hospice and Palliative Care Center in Winston-Salem.

“The Gospel According to St. Tink” columns in the Whatever Happened To … ? newsletter