This Monday, Canadians from coast to coast will celebrate the birth of the greatest country on Earth. Returning to her home and native land will be Angelina Love, who will be in Brampton, Ontario, as part of the annual TigerFest celebration. 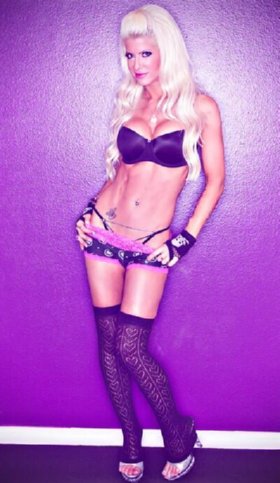 The show, presented by the legendary Tiger Jeet Singh and his son, former WWE superstar Tiger Ali Singh, is the main event of the city’s day-long Canada Day festivities. The wrestling show will also be a fundraiser in support of the William Osler Health System Foundation.

For Love (real name, Lauren Williams), in addition to being part of a great cause, being part of TigerFest allows her the opportunity to come back to Ontario where she got her start.

“I make it up a few times a year,” she told SLAM! Wrestling days before the event. “I miss not seeing my family and friends up in Toronto as often as I’d like. But this is the lifestyle I have chosen.”

Indeed, while Love was in TNA as one of the Beautiful People, the company’s trips to Canada were few and far between. Still, Love can’t complain about her time with the company, and shared some of her favourite memories of her time there.

“My best memories definitely include co-creating The Beautiful People with one of my best friends, Velvet Sky. Also, being the first five-time TNA Knockouts Champion. (I’m so lucky that I was able to) travel all over the world and have a ton of fun.”

Which is not to say that she’s slowed down since leaving the company. Indeed, Love has been wrestling for various companies around the world.

As well, Love is thrilled to have been given the opportunity to do some acting.

“I filmed a TV show in Sudbury, Ontario called Dark Rising: Warrior of Worlds,” she revealed, “where I was the main bad girl. I got to act and do all my own stunts for the fight scenes. The premiere is coming very soon; I’ll be all over social media — my Twitter account is @ActualALove — with all the details.”

Fans can go to her Twitter page to also find out about her other upcoming projects.

“I’ve got some fun plans coming up with fitness, and I love acting,” she said. “But I would still like to continue to wrestle, I’ve got so much to offer.”

Which the fans who attend TigerFest will get to see up close (or her appearance on Sunday in Whitby, Ontario for a Squared Circle show at the Class Act Dinner Theatre). For Love, the chance to perform there is a chance to say thanks to the Canadian faithful who have supported her career from its beginnings to TNA and beyond.

“I truly love and appreciate the support I get from my fans — they make all these years of hard work soooo worth it. I’m so fortunate to have everyone up there be super supportive of me and my career. All I can say to my fans is ‘Thank you so much.'”

TIGERFEST
TigerFest will be part of Brampton, Ontario’s Canada Day celebration at Chinguacousy Park. The festivities kick off at noon, with various events, including live performances by Bollywood singers and dancing troupes and the national anthem sung by recording artist Prita Chhabra.