You’ve got your Hell in a Cell. You’ve got your Elimination Chamber. Still, nothing beats the granddaddy of all steel cage contests: War Games. War Games entail all that makes good pro-wrestling matches great: unpredictability, brutality and tons of showmanship. 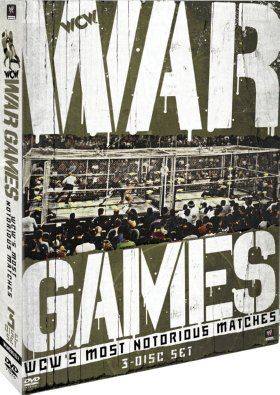 The massive, roofed War Games steel cage enclosing two wrestling rings was always a sight to behold. Add two teams of feuding grapplers into the mix and you had the makings of a pier six brawl to end all pier six brawls. War Games was not for the faint of heart. That is why it was one of my guilty pleasures.

Created by the Master of the Bionic Elbow, hisself, Dusty Rhodes, War Games began as part of the Great American Bash arena tour. Over the years it took on a life of its own to become its own WCW pay-per-view.

Considering he was the innovator of the violence, it only makes sense that Rhodes is our host for the War Games: WCW’s Most Notorious Matches DVD set. Not only does he take us back, revealing the inspiration for the two-ring, one cage metal monstrosity, he also chronicles how the status of the gimmick match changed for better and for worse as the National Wrestling Alliance evolved into World Championship Wrestling.

Instead of one DVD though, as has been the case with commentary on other releases in the WWE DVD library, Rhodes hosts all three discs giving us his personal recollections throughout the entire history of War Games. There are some great tidbits such the revelation that J.J. Dillon broke his collarbone when The Road Warriors hit him with the Doomsday Device during the first War Games match. Dillon still has a bump to this day to remind him of the match.

Legion of Doom, for sure. 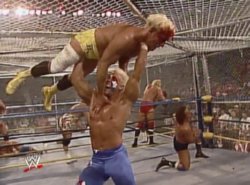 Starting things off with the very first (and still the best) War Games match from the July 4th Great American Bash in 1987 to the War Games match from an episode of Nitro featuring Sting, Booker T, Goldberg and Kronik versus Kevin Nash, Jeff Jarrett, Scott Steiner and The Harris Brothers; the set explores every War Games scenario. That’s 13 matches and considering each War Games bout can run around 20-30 minutes, that’s a lot of cage mashing mayhem for your hard-earned cash.

The 14th match is the 1988 Great American Bash Tower of Doom bout in which three cages are stacked on top of each other, the idea being to make it to the bottom cage to escape. Including the rare match to show how the War Games concept was adapted is terrific. It is too bad the producers couldn’t make room for the Tower of Doom match from Uncensored 1996. It was actually better in every respect. 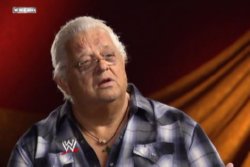 Dusty Rhodes is the host of the War Games DVD.

The one and only major criticism I would have of this exceptionally comprehensive set is it would have been nice to hear from War Game veterans. People like Road Warrior Animal, Nikita Koloff, Ivan Koloff and Lex Luger. They could have shed some light on how hard it is to work a War Games match and maybe shared some of their insider stories; especially the awesome Ivan and Nikita whose remarkable work in the squared circle is so underrated and underappreciated.

This set is one of the cornerstones of my wrestling media collection. To have all of the War Games matches in one set is priceless. These are matches fans will enjoy time and time again for the action, the off the chart work rates, the history and, lets face it, all of the glorious carnage and plunda, if you weeeeeeeeeiiiilllllll.