Jian and Page Magen, twin businessmen from Toronto, want the world to know The Iron Sheik like they have known him throughout their lives — as a hero, as a man who has had his personal ups and downs, as in iconic pop culture figure.

To that end, the Magens are launching a funding campaign to complete a documentary on The Iron Sheik that they had been working on for six years.

The goal is to raise $100,000, which includes necessary ankle surgery for The Iron Sheik.

While the Magens grew up in Canada, their father, Bijan, is from Iran, and moved in Canada in the mid-’70s. He was a competitive table tennis player and knew Hossein Khosrow Ali Vaziri as an Olympic-calibre wrestler, but lost touch initially when he moved to Canada. Vaziri also served as a bodyguard to the Shah of Iran. 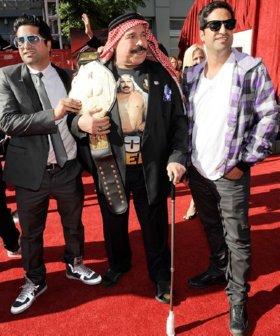 Page and Jian Magen flank The Iron Sheik on the red carpet at the Grammys. Photo courtesy the Magen brothers

Through their father, the Magens were raised idolizing The Iron Sheik, and consider him an uncle. Any time Sheik was in Toronto, he would stay with the family in their north Toronto home.

There were a lot of ups and downs through the six-year filming process, said Jian Magen.

“The first three years, he was addicted to crack cocaine. We couldn’t do much with the footage, other than expose him. So we kept on trying,” said Jian. “He cleaned up one night here in Toronto, when we stopped everything, and said we’re not going to be able to work with him any more. He had a mild heart attack and he was in the hospital for four days here in Toronto, getting sober. At that point, his life turned it around — he turned it around.”

The Magens can be seen in a lot of photos with The Iron Sheik over the last few years — at the Grammy Awards, at wrestling shows, and at comedy events. They have helped launch The Iron Sheik as a brand, capitalizing on his pop culture cachet, and off-the-handle personality, to create an iconic personality that has grown out of the wrestling world.

Calling The Iron Sheik a “social media icon,” with over 300,000 Twitter followers, Jian Magen said that their support and direction for their “uncle” has helping make it all happen.

“I’m not taking credit for who he is, but my brother and I are a big part of the whole revival,” said Jian, choosing his words carefully. “We took him from being a drug addict, cleaning him up, to making him a social media icon. Indirectly, he has had everything to do with the success of our business.”

The Magens have their hands in a lot of pots. Their primary business is Magen Boys Entertainment, a company that sets up events and parties, but they have also promoted wrestling under the Twin Wresting Entertainment banner, and raised thousands of dollars for the Pro Wrestling Hall of Fame through five Titans in Toronto events (with Andy Stefanidies and Greg Oliver). They are also partners in a sub shop in downtown Toronto, and are involved in various night clubs and venues.

On the Indiegogo fundraising page, The Iron Sheik offers many different opportunities for supporters to be a part of his project, and shares this take on the film: “We start to make a movie, documentary, about my life. How I bodyguard of Shah, how I was gold medal wrestling champion, how I was #1 WWE champion, how I was the real shooter and not like that dog dick Hulk Hogan. But now we need the help of the fans. So if you have the heart, if you have the balls, please help support my documentary on the indiegogogo and to make the REAL film for the REAL fans about the REAL legend.”

The $100,000 will cover some of the costs of production and post-production, including equipment rentals, locations, music, insurance, and legalities associated with making a film. A portion of the funds will also go towards his much needed ankle and double knee surgery.

“For years we have had the opportunity to get to know both Khosrow Vaziri and his alter ego The Iron Sheik,” concluded Page Magen. “This is a story of a man who has had his share of ups and downs in one of the toughest industries in all of entertainment. We are living out our dream with this project and are excited to provide Sheik fans with a true tell all encounter of his path to greatness.”

Greg Oliver is the Producer of SLAM! Wrestling and has worked with the Magens on the Titans in Toronto events. He has no financial interest in this film.