TNA Knockout Mickie James has recently regained gold in the form of the Knockouts Championship. But she’s probably hoping that she’ll earn more gold, in the form of a gold album, with the recent release of her second country music CD.

Like her first album, her new CD, Somebody’s Gonna Pay is a solid outing that fits in well with a lot of the music you’d find on a new country station. Songs range from rocking anthems to slower ballads that would close out the night at a honky tonk bar. 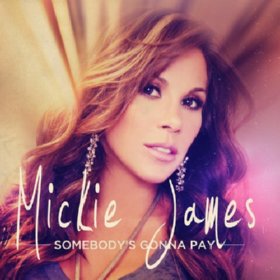 Of the eleven tracks, the highlights are the opening title track, which is a revenge song with a catchy chorus, “Best Damn Night” which is a good arena song that could be used to kick off a concert, and the ballad “If It Can’t Be Me”. The bonus track is “Hardcore Country”, Mickie’s TNA theme song which was co-written by Dixie Carter’s husband – this is one of the weaker song on the albums, most notably because of the cheesy male vocals belting out “Hardcore Country” in a faux aggressive voice that really take away from Mickie’s singing.

It’s unfortunate, since in terms of vocals, James proves that this CD isn’t merely a vanity project — she really does have legitimate talent. Her voice is generally strong and clear — nothing unique like a Lindi Ortega or outstanding like Carrie Underwood — a nice tone with an occasional whiskey-soaked rasp that adds some character on some of the tunes. If there is any complaint, it’s that sometimes she bends her words too much, so that words come out weird. For example, in once song, the words “ice cream” come out like “ay-ace cream” and coffee becomes a four-syllable word. It’s not unlike the way Kellie Pickler sings, but in this case, because James doesn’t sound like that in every song, when it’s there it can be a bit distracting.

Fortunately, she has support during some songs in the form of Allison Moorer, one of country musics’ finest voices. Moorer isn’t the only one that helped James with the album — indeed, there are many established songwriters that contributed to some tracks, including multiple number-one song writers Craig Wiseman and Rivers Rutherford, multiple award winner Tom Shapiro, and Civil Wars member John Paul White.

The fact that she could get such A-listers on the album belies the fact that the album was financed through a Kickstarter campaign from James’ fans. Based on the results, it’s a safe bet that the investors will be generally pleased with the outcome.

Somebody’s Gonna Pay can be purchased on iTunes and through other music retailers.

EDITOR’S NOTE: Bob Kapur donated to the Kickstarter campaign and is listed as one of the producers of the album, though he has no ongoing financial interests in the project.