John Adams, a midget wrestler who wrestled as Little John, died Monday in Hamilton, Ontario. His friends remember him as a fun-loving, if troubled, person.

There is probably nobody that Little John wrestled more than Farmer Pete.

“He was great. He and I were more or less married in the business. My first 15 to 20 years were with him,” said Farmer Pete (Paul Richard). “He was great in the ring. He and I could put on a 15-minute match without saying a word.” 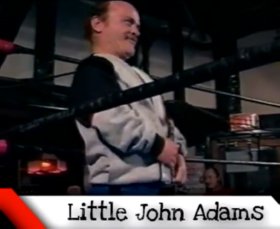 Farmer Pete and Little John (who also wrestled as Ivan the Terrible) came up with one spot during their matches that everyone loved.

One fun thing, I used to stand him on his head and spin him around like a top,” said Farmer Pete.

Ricky “Soulman” Johnson concurred. “All the guys used to come out to watch that spot, just to watch it. It was the funniest thing, because he’d spin nine or 10 times. I’ve never seen anything like it in my life.”

John Adams was originally from Toronto, and was a little person, and not a dwarf, meaning that he was very short, but normally proportioned. Not all the details of his family life and upbringing are known, but his mother and three sisters were little persons, and one sister had a son who was little, and who now wrestles occasionally in Ontario as Little John Adams.

Allen Abel wrote about him in the Globe & Mail in 1981: “Little John is a 98-pounder from Toronto with cauliflower ears and tattoos on both biceps and a sneering air of malfeasance beneath a furrowed brow.”

Abel also asked Little John about his entry into wrestling.

“I would go to the shows and watch them,” Little John said, “and then I decided to go to a gym and train and get to travel all over like them, up North and to the States.” Indeed, for a time, Little John was a part of the stable of wrestlers booked by Lord Littlebrook, and he did travel the world.

The little people were a regular part of the tours for “Bearman” Dave McKigney, Farmer Pete and Little John included.

Rolly Duguay was a great friend of McKigney and the boys, and often drove the bus from town to town. His auto shop in Toronto was a regular hangout spot. He knew Adams early in his wrestling days.

Duguay recalled that Adams’ father had a furniture store in Toronto; “He never talked a lot about his family.”

They first met when Adams was wrestling for Bull Johnson in Hamilton at the Armory, and they developed a fast friendship. Duguay was there when Little John first shaved his head. “He was only 24 and he looked like an old man,” chuckled Duguay. “I went with him to the barber to get his head shaved. He didn’t want to do that. He was pouting all the way home.”

“He used to love wrestling Dave’s bear,” said Farmer Pete. “Dave would turn the bear around, and he would run and jump on the bear as if he was riding it. Dave would get the bear to stand right up on two paws, his back paws. John would be like, ‘Hi-ho Silver!’ He’d be hanging on that bear for dear life. He loved it. He loved his wrestling.”

Little John also toured with Phil Watson’s Canadian Half-Pints basketball team, preaching an anti-bullying message. In fact, in interviews Watson often said that it was while playing hoops with Little John and Little Mr. T that he came up with the idea of the touring squad.

Adams lived with Duguay a lot of the time he worked with McKigney.

He could be spirited, said Duguay. “I remember one time he was fighting with a neighbour’s kid, so I had to go outside and separate them, but that’s how he was.”

Johnson said that Adams liked to have a good time, maybe too much of one.

“The nicest guy you could ever meet. He’d just go along with everybody,” said Johnson.

At one point, Adams’ drinking problem left him homeless on the streets of Toronto. “We went looking for him actually, because I wanted to help him out when I heard that,” said Johnson.

According to Farmer Pete, Adams had been in a nursing home in Hamilton for at least the last three years.

Funeral arrangements are not known at this point.