Mat Matters: ‘Llakor’ Michael Ryan was a friend to all Quebec wrestling

Quebec wrestling was hit with sad news this morning of the passing of Michael Ryan, better known in the wrestling community as Llakor. Michael was arguably the best publicist in Quebec wrestling, he was involved in many wrestling promotions starting with the International Wrestling Syndicate (IWS) and most recently with Inter Species Wrestling, C*4 and Battlewar. But for me, he’s the person who first started working by my side on the book on the history of pro wrestling in Montreal. Actually, it was his idea.

Let’s go back to September of 2008, if you please. I was starting to work on compiling a list of the best Quebec wrestlers of all time. Killer Kowalski had just died and I saw an article on Michael’s blog, “When We Were Marks,” about Kowalski. The article was actually very good and I was kind of surprised because I didn’t know he was so historically savvy about Quebec wrestling. 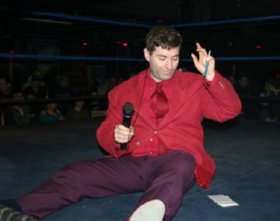 Michael Ryan, in a wrestling ring, pen in hand!

I knew Michael since 2004, when I first started my magazines on the Quebec indy scene. He was then involved with the IWS in Montreal, working behind-the-scenes and as their publicist and person in charge of merchandise. For many years, I was going to every IWS show selling my magazine and was helping Michael with the IWS merch as a thank you to them letting me sell my things. That’s when I got to know him a lot better as we were talking about both our experiences and stories in wrestling. Ever since, Michael was part of the Quebec wrestling awards and Quebec wrestling Hall of Fame panels. When the IWS closed a few years later, his passion for writing about wrestling continued with other promotions such as C*4 in Ottawa and most recently Battlewar in Montreal. He was also did commentary on C*4 DVDs from time to time and worked for Inter-Species Wrestling in many capacities.

Back to September 2008, I gave Michael a call about a project on the history of Quebec wrestling. Basically, I wanted him to help me write bios of the wrestlers making the list. We met, and as we were sharing thoughts, he came with the idea of writing more than just 25 biographies. His idea was to write side stories about the people making the list.

In order to be accurate, we decided to interview some former wrestlers, another of Micheal’s idea. Together, we interviewed the likes of Raymond Rougeau, Jacques Rougeau Sr., Rick Martel, Gino Brito, Len Shelley, Billy Two Rivers and the late Édouard Carpentier. Soon enough and before we knew it, we were working on a book on the history of Quebec wrestling.

Unfortunately, Michael was loaded with work being the founder and director of the Young Cuts Film Festival, his other passion besides wrestling. So in July 2009, we agreed that I would work with someone else on the book and that he would finish writing whatever he had started. As duly noted in the book, Mad Dogs, Midgets and Screw Jobs: The Untold Story of How Montreal Shaped the World of Wrestling (which came out in February), some of his writing and research is in certain sections, especially Stan Stasiak, the pre-Eddie Quinn era and of course, Kowalski. Thankfully, he was able to read and see the final result.

Michael was 45 at the time of his death. He was born in Montreal but had lived 15 years in the Maritimes when he was younger. I still remember him talking about the Cormiers and Sweet Daddy Siki. I have a fond memories of his reaction when we interviewed Gino Brito and he told us that Leo Burke was at one point the head booker of International Wrestling. He was just amazed and started laughing!

I spoke to Michael’s mother today and he was supposed to go to the Laurentians, to his parents’ house during the weekend, but never showed up. His parents didn’t panic since they knew Michael was often going to Ottawa for wrestling and thought it was one of those weekends.

He didn’t show up for Battlewar on Sunday, something he usually never did without a reason and he wasn’t at work at the beginning of the week either. Michael’s boss called his parents on Wednesday and the parents called 911.

However, one of Battlewar’s promoters had previously contacted the police and they were already at his apartment when Michael’s parents called. Soon after, the police reported the terrible news to Michele and Terry Ryan of their son’s death. The reason of his passing is not yet official, but it is believed Michael had a stroke or an aneurism. Complicating things was Michael’s diabetes. Over the years, I was aware of Michael being hospitalized for his diabetes, as I saw him lose and gain a lot of weight because of that, but he was always very careful with his disease.

Michael simply loved wrestling. He was passionate about it and would react differently than any other person I know. If I wanted to know the results of a wrestling show or how many people attended it, Michael was way more interested by the fact that on the same night, there was a riot at a wrestling show at Jarry Park and a riot at the Montreal Forum for a Rolling Stones concert!

“To the majority of fans, he will be best remembered as the man who, for the better part of the last decade, was Quebec indy wrestling’s biggest cheerleader,” wrote C*4 promoter Mark Pollesel on his Facebook page. “Whether it was his time over the last year with Battlewar, his time with Inter Species Wrestling, or most notably being one of the go-to people behind the scenes at IWS – he was 100% behind whatever he supported…When people spend some time behind the curtain in wrestling, many of us find ourselves jaded. The one thing I will always admire of Llakor was no matter how deep he got – he could always be a fan.”

Michael was also well-known in many wrestling circles because of his writing. He contributed on SLAM! Wrestling, the Wrestling Observer and many other wrestling news websites. I vividly recall talking to him and sharing both our pride when El Generico got signed by the WWE a few months ago. Michael was one of the people involved when Generico and Kevin Steen first got their break on the U.S. indy scene in 2004.

“Nobody was more instrumental in getting Quebec wrestling/wrestlers over in the U.S. than the Llak-man,” confirmed Neil Felzenstein, a.k.a. pro wrestler Beef Wellington, on his Facebook page.

This train of thoughts was also shared by ROH’s Kevin Steen on his Twitter account: “Michael ‘Llakor’ Ryan did so much for me and my career, more than he ever knew. Never got the chance to tell him…He will be missed. RIP.”

The last time I saw Michael was at a Battlewar show in March. We were both behind a merchandise table, selling our stuff, like we used to many years ago.

Michael Ryan was one of my peers, someone for whom I had the utmost respect for, and a very knowledgeable person. Every time he wrote a piece and needed an opinion or more information, he would send it my way. If he ended up not being a co-author, he became a collaborator, a contributor and someone I will never forget.

Publicists are sometimes the unheralded heroes of wrestling. Because of them, many people succeed, many people become well-known, but their work is rarely recognized.

“Mike was an incredible writer who spent countless hours putting together articles and pieces on so many of us who participate in professional wrestling. He’d make us look like a million dollars. He’d make us look better than we actually are,” wrote James Alfonse McGee III, a.k.a. pro wrestler Twiggy, on his Facebook page today.

“Your words made the smallest of shows seem like can’t-miss events,” added ISW owner Michael Rotch Woods on his Facebook page.

It’s an art to always come up with the right words in an interesting story that will make the readers buy tickets or buy the DVD. And that’s what Michael “Llakor” Ryan was all about.

In name of all the Quebec indy wrestling scene, I’d like to wish his parents, his family and his friends my most sincere condolences. For those who would like to have more information on his funerals, his mother told me that she would put all the necessary information on Michael’s Facebook page, where you can find many notes by people who will deeply miss him.

Life is weird sometimes. Michael Ryan spent many years talking and writing about other people, putting them over. And it took his death to finally have everyone return the favour to him.

Mike, wherever you are now, make sure to hang out with all the great wrestling legends you grew up with and who gave you the passion you had for this business. I’m sure that “When We Were Marks” will be a hit up there.

You will be missed.

Pat Laprade is very sad today and no words can really expressed that. This is easily the hardest column he has ever had to write.

MICHAEL RYAN AND SLAM! Wrestling
Naturally, someone like Michael Ryan, who wore so many different hats in Quebec wrestling, had a lot to do with SLAM! Wrestling. He was instrumental in my one and only trip down the 401 from Toronto for an IWS show, where Sid Vicious was the surprise.

As the Producer, I relied on Michael time and again for background, links to the key figures, and, in a couple of occasions, for his writing. I still think that his piece about the death of his friend, Frank Morin — Stinky the Homeless Guy — is among the best tributes that we’ve run on the website.