Guest column: Raising a hat to the late Stinky the Homeless Guy

Stinky the Homeless Guy is gone.

When Capital City Championship Combat (C*4 Wrestling) came to Montreal on January 15th for their first show (Triumph 2011) outside of their Ottawa territory, the wrestler most conspicuous by his absence was Frank Morin a.k.a. Inter-Species Wrestling’s Stinky the Homeless Guy. For C*4 Wrestling, Frank wrestled as Bash Bison. 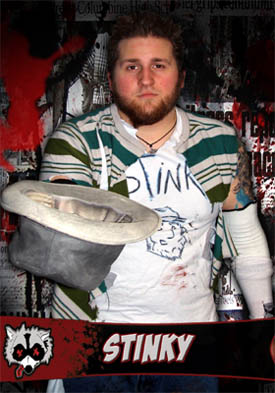 Instead of Bash Bison, a wrestler named Dash Bison made his debut. Fans not at the show hearing the results assumed that it was a typo. Fans who were there assumed that C*4 Wrestling was introducing Dash Bison to be Bash’s brother so the promotion could do a brother tag team down the road.

The truth was simpler and sadder: Dash Bison was a tribute to Frank organized by his friends.

Frank had been diagnosed with cancer and recently given less than a year to live by his doctors.

Frank Morin died on Friday, peacefully in his sleep, surrounded by his family and his friends. He was only 23.

He is survived by his father, Denis Morin, his mother Lorraine Babin, his sister Marie-Andrée Morin, his grandmothers Madeleine Legault and Raymonde Boucherhis, half-sisters Isabelle Couture and Amélie Couture, as well as his long-time girlfriend Raphaëlle Levert.

“To know Frank was to love him,” said C*4 wrestling promoter Mark Pollesel. “He kept a brave and smiling face, and kept those around him comforted with his one of a kind sense of humour.”

The facts of Frank’s wrestling career are brief: his training was a group project led by Tommy Blade and Pat Hamilton; in addition to Stinky the Homeless Guy and Bash Bison, Frank wrestled as Kid Supreme and Big Van Voltage. He started wrestling professionally in 2004 for the Gatineau promotion CPW, debuting in a tag team match as a partner with Psycho against the team of Aftershock. Frank mainly wrestled for local promotions in Canada’s capital region of Ottawa, Gatineau and Hull. 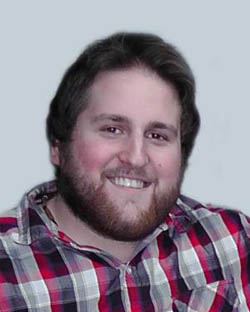 Known to his friends as Phrank, Morin left behind many friends in the wrestling business. On his Facebook page, wrestler Colin Delaney posted, “You were taken way too young and you will be missed. Amuse-toi là haut. Je t’aime.” Ricardo Rodriguez — Alberto del Rio’s ring announcer — on his twitter said, “I remember being the new guy in CHIKARA and Frank was the first one to make it feel like home. You were way too young brother.”

Ottawa based masked wrestler Player Uno wrote, “[He was] the best friend anyone could have ever had.”

Frank broke into wrestling with Player Uno and Stupefied, his best friends in and out of wrestling. He had many of his best matches with or against them. Fans of the now-closed CPW promotion remember fondly a triple threat match between the three men that tore the house down. They remember even more fondly Uno and Stupefied rolling Frank to the ring in a chair while he carried a scepter and wore a hand-made crown and an ear-splitting grin.

Frank’s brief career was interrupted by a variety of injuries that always seemed to come with terrible timing, just before shows that would have introduced him to large, appreciative audiences. It was while rehabbing to come back from just such an injury (late in 2010) that he was diagnosed with cancer.

Frank came to the attention of the larger wrestling world when he began wrestling for the cult wrestling federation Inter Species Wrestling as Stinky the Homeless Guy, making his debut for them on December 9, 2005 during their “Fight Before Christmas” show in Valleyfield, Quebec.

In ISW lore, the McJobber Flip D. Berger needed a partner for a tag team match. Stinky was outside the wrestling venue, shivering against the December cold, holding a sign marked “Will Wrestle for Food” when Flip recruited the hobo on the spot to join the tag team that came to be called “Lady and the Tramp” — paying him with a Happy Meal.

Stinky was the inaugural champion of ISW’s secondary title, literally the “ISW Other Title.” He became the Other champion when Kevin Steen threw the old ISW belt into the trash and Stinky found it while dumpster diving. 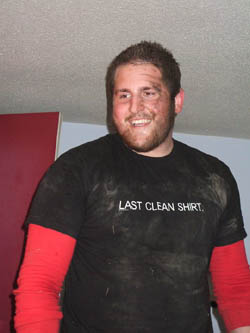 Rarely has a wrestler, a character, and a promotion been better suited to one another. The best wrestling characters are the ones that are an exaggeration of the real person inhabiting the character. Stinky was Frank magnified.

As Stinky, Frank wrestled with joy, joy that was both infectious and entertaining. Frank loved being in the ring; he loved pleasing the fans and the fans, in turn, loved him.

The first thing that everyone remembers about Frank was his smile — whether he was inside the ring wrestling or outside the ring meeting fans or just hanging out with his friends and family.

“We had a Canada’s Day party in 2007,” remembered ISW promoter Mike Woods. “Frank’s time was spent play fighting with my little brother and his friends. They were about six at the time … the kids came back into the house laughing. Frank followed — his hair messy, his clothes grass-stained, and footprints all over his face. Dirty shoe footprints, as if the kids actually beat him up — covering his face — which, like always, had a smile plastered on it.”

Stinky came to the ring waving his hat for change; a battered pork-pie hat that served as symbol of who he was, entrance prop and as a weapon used both by Stinky and against him.

Even when the wrestling fates turned, when Stinky’s partner Flip D. Berger betrayed him, and Stinky lost his title to Moohammad, Frank was not angry so much as disappointed, preferring to believe that if he could only get his former partner back into the ring, he could beat some sense into him.

Many fans consider Frank’s best match to be the blow-off match in the feud between Stinky and Flip. It was a hardcore match, but where other hardcore wrestlers used steel and glass, metal and wood, fire and pain, Frank made a typically whimsical choice — picking instead a children’s toy. He invited fans to bring weapons made out of Lego and used them in his match.

(ISW has made that match available for free here: http://iswondemand.com/?p=224)

The hat and the Lego spoke to who Stinky was: a man down on his luck who could still smile and be an optimist; who could still find joy in a world that seemed turned against him; who knew as Leonard Cohen sings, “There is a crack in everything/That’s how the light gets in.”

Today, Stinky’s hat has fallen from lifeless fingers and it is up to us to pick up his hat, to remember who Frank was and what he stood for.

Stinky, the wrestler, is gone.

Frank Morin, the man, will never be forgotten.

Frank will be laid to rest on Saturday in a private ceremony. There are public viewings Friday from 2-4 p.m. and from 7-9 p.m. at the Serge Legault Funeral Home, 103 boulevard des Allumettières, Gatineau, Québec. His family asks instead of flowers that a contribution be made in his memory to the Canadian Cancer Society — www.cancer.ca.

Frank’s friends are currently planning a memorial wrestling show to be held in August to celebrate Frank’s life and to raise money for the Canadian Cancer Society. More details as they become available.

Michael “Llakor” Ryan has been involved in the wrestling scene in Montreal for 10 years.