When Hulk Hogan’s second autobiography came out, for some reason, we barely made note of it here on SLAM! Wrestling. Having just finished reading it, I can say that we made a mistake dismissing it so quickly. 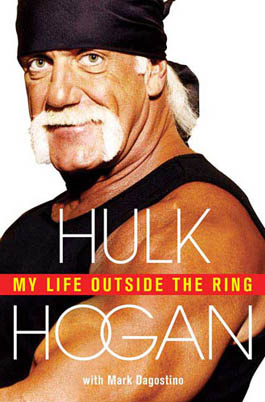 There’s a lot more heart and emotion in it than only a few other wrestling books.

Like a wave of Hulkamania swelling from the crowd as he Hulked up in the ring, there are times that I had to set Hulk Hogan: My Life Outside the Ring down to cheer the man for overcoming the odds, for suffering through some truly horrible times in his personal and professional life.

In particular, his son Nick’s car accident, which crippled Nick’s best friend, John Graziano, is gone over in detail. That it happened while Hogan and his wife Linda were in the process of separating only adds to the tragedy.

Yet — and there’s always a yet with Hogan — it’s hard to feel totally sorry for the guy. He lived a life most can only dream of, hero to millions, multimillionaire wrestler, TV and movie star.

You can essentially throw a lot of it to the side if you’re not interested in certain details, whether it’s his Hogan Knows Best days, his daughter’s singing career, or his discovery of the self-help book, A New Earth, and the mumbo-jumbo that accompanies his transformation.

But compared to his first autobiography, the WWE Books’ Hollywood Hogan, My Life Outside the Ring, co-written with Mark Dagostino, is a veritable treasure trove of insight into the man, Terry Bollea, and the life he led when he wasn’t the Incredible Hulk Hogan.

Naturally, there is some duplication with the first book, especially when it comes to his upbringing and getting into pro wrestling. But somehow it feels more honest here, in a way that’s really hard to put a finger on.It can be everything from the more honest recollections of his mom, dad, his late brother Alan, and his mysterious half-brother, to his friendships, including Ed Leslie, a.k.a. Brutus Beefcake.

I loved little details, like this description of living with Beefcake, and working together in a Tampa bar. “After working out and running the gym all day, Brutus and I had a pretty standard routine. We’d open up the bar and get everything settled, and then we’d come back and watch David Letterman’s Late Night show. Man, we laughed our asses off. While we watched, we’d drink these power shakes. I’d take the most fattening protein there was, called Metabol, and dump it in a blender with half a cube of vanilla Haagen-Dazs ice cream, a banana, and two huge wads of peanut butter. Probably the most fattening shit you can eat. We’d drink two blenders of that crap, watch Letterman, then go back to the bar and stay until closing at 4:00 a.m.”

And in this autobiography, he comes clean about steroid use, and it’s obvious that a surprising amount of introspection went into the text.

“It’s also weird to think about the fact that I was doing all of this — and the steroids — while telling all of my young fans week after week, ‘Train, say your prayers, and take your vitamins.’ That line was like my own Bob Barker catchphrase. I threw that sentiment out into the world day after day. Not that there’s anything wrong with that message. It’s a great message. It was just a little bit hypocritical that my activities behind the scenes didn’t match the role-model persona I was putting out there,” Hogan writes. “I’m glad I did it, though. Putting that kind of positive message out there to millions of kids is one of the least self-centered things I did in all those years. I put it right up there with visiting kids for the Make-A-Wish Foundation and other charity work I did. Throwing that kind of positive vibe out into the universe can only bring positive things in return.”

Like anything Hogan says, there is a need to briefly consider whether he’s working you or not, whether he’s told the story so many times that he believes that it truly happened that way.And that’s not meant as a criticism, or at least not much of one. When one considers the abuse of his body, the blows to the head, the wear and tear of the travel, I can forgive the fact that he’s forgotten things, or taken the easy way out.

Now available in paperback, with an additional chapter addressing life after his divorce, his daughter’s singing career, and his return to the wrestling business, Hulk Hogan: My Life Outside the Ring is a worthy pickup for a casual fan, whether of the TV show or wrestling.

Hardcore fans, like me, however, will have a difficult time ignoring the places where Hogan could have expanded and added upon. Nick Bockwinkel gets one mention, for example, yet there’s nothing about his professionalism, in-ring skills, and erudite interviews, or how it may (or may not have) rubbed off on Hogan. There’s no doubt that Hogan’s wrestling skills increased ten-fold going around the AWA territory with Bockwinkel.

Aside from his role in Rocky III, Hogan doesn’t go into his movies at all, leaving cinematic gems like Santa With Muscles without the desired backstory. His foray into TV with Thunder in Paradise gets a little more ink, but not much.

Perhaps there’s a third book planned with movies and TV and more wrestling; or maybe the third autobiography (trying to catch up to Mick Foley, perhaps) will solely address Linda Hogan, who has her own book coming out, Wrestling The Hulk: My Life Against The Ropes, from It Books, a division of HarperCollins.

In short, I doubt Hulk Hogan: My Life Outside the Ring is the last word for the greatest wrestling icon of the past 30 years.