WrestleMania has become about far more than just the show. My girlfriend and I spent last weekend in and around New York, just enjoying ourselves.

My sole assignment for SLAM! Wrestling was to attend WWE Fan Axxess, and I wanted to share some of my impressions of it as a first-time attendee. 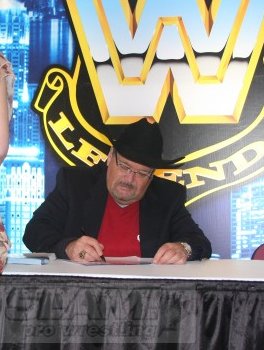 Jim Ross signs an autograph in the legends section of WWE Axxess. Photos by Bruno Silveira

I was there for the Saturday morning shift, which was probably a hard one for a lot of people to attend — especially if they had been up late at some of the many indy wrestling shows around town. It was difficult to get an accurate number of fans in attendance because everyone was pretty spread out throughout the building. The doors opened at 8 a.m. and some of the attendees were leaving by 10:30 a.m.

As I got to the Izod Center, there was a large crowd awaiting to get inside. Outside of the venue was a very large merchandise trailer blasting WWE superstar theme music.

Next to the arena steps was the infamous Vince McMahon exploded limousine, Stone Cold’s ATV, and Alberto’s Rolls-Royce. When I got onto the event floor there was a beautiful custom made motorcycle for the National guard where fans could take pictures with. Next to that there was another National Guard booth where fans could practice there pitching accuracy by throwing a ball at a target.

The children were all flocking to a foam-heavy ring where children waited in line to climb inside the ring and dive into the pit.

When I turned my attention to the ring the first person I saw was newly signed Sami Zayn, fans will probably remember him by his other persona, El Generico.

I was a photographer for Ring of Honor during the Kevin Steen and El Generico era. I even shot the event that they won the tag team titles for the first time in Boston. So I feel like we have that special bond, even though he may not be aware of it. Sami has the ability and skill to be one of the best in-ring performers, but in this business we know that skill will only take you so far. I hope the WWE will do something special with them that wins over the fans. 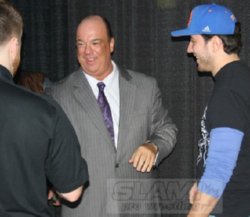 Fans were made to wait in very long lines. I spoke with several fans and they were very annoyed that they were waiting in line for so long and missing out on everything going on, only to then find out that WWE was replacing the advertised superstar with someone else.

I was excited when I saw all the WWE belts on display, but I could tell one or more of them were replicas and not the original belt. It was very cool to see how beat up the original classic WWF tag team title was.

One of the booths there was called CENANATION, where fans were only asked Cena related questions.

The statue of Andre the Giant was really cool. It was very massive and fans crowded around to take pictures next to it. 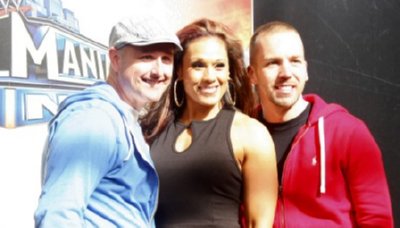 Tamina poses for a photo.

Overall it was your traditional Axxess event with memorabilia left and right and activities for the fans to participate in.

Being a sports photographer requires an ability to adapt to different environments around you. For example, the most common mistake wrestling fans make is to use a point and shoot camera while using the flash to shoot things in the ring. The flash can only go so far, and doesn’t actually help as the picture will come out dark and grainy. The equipment the fans need is prohibited from Axxess. I dealt with many different lighting situations due to all the windows in the concourse area which actually made me uncomfortably hot, as well as Tamina judging by her reaction. The display cases were very difficult to shoot due to the reflective nature of the glass. Fans near me mirrored my frustration when trying to take pictures, with lesser technology.

WWE should really think about scheduling the signings better for fans to be able to experience everything. If you waited in line for Paul Heyman or Daniel Bryan you were essentially wasting almost an hour waiting in line. Why not have one long table with all the signing superstars and one line. Get your meet and greets out of the way early and have the rest of the time to enjoy all there is to do?

Bruno Silveira has been shooting for SLAM! Wrestling for almost four years as a photographer and occasional writer. You can his galleries in the Photo Gallery section of the site. Until next time, stay classy my friends.