After a great book launch, a lot of media attention and a deal for a French version of our book, Mad Dogs, Midgets, and Screw Jobs, our journey as authors reached another level last weekend with WrestleCon, the first of many wresting conventions we booked ourselves into throughout 2013. Come aboard as we’ll take you through our weekend, sharing experiences, thoughts and feel good moments of what we can now call the launching of “The Summer of Pat & Bert!” 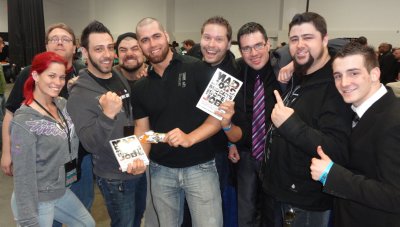 Our journey began early Friday morning as we drove from Montreal to get to Secaucus, New Jersey for WrestleCon. In the car: Bertrand Hebert, my co-author on Mad Dogs, Midgets and Screw Jobs, myself and the voice of TNA in France, Célian Varini , who’s also working on another channel doing commentaries for WWE Experience and Vintage Collection. We were stopped at the border so Célian could pay a $6 visa fee to enter the United States. The funny story is that inside customs, a full bus of elderly Korean people was also being stopped and questioned. Can you say bad timing?

We were on our merry way quicker than our friends on the bus. Some five hours after, we got to our hotel and minutes later we hit WrestleCon to set up our table. Friday night was kind of quiet. Bertrand went to see the Pro Wrestling Syndicate with one of our friends and I stayed on the premises to watch Evolve and CZW. It was fun to see and chat again with wrestling friends from all over the world. Hanging out with people who share the same passion from Australia, England, United States, Japan is always one of the things I love the most about this business.

Saturday was the big day as the convention was starting and fans were swarming the Meadowlands Expo Center. There were tons of vendors selling everything and anything wrestling related, from action figure to magazines going through books, DVDs and vintage memorabilia. But the main attractions were the dozens and dozens of wrestling personalities on hand to sign autographs and take pictures with fans in attendance.

For Bertrand and I, it was our first time as vendors and it was quite a thrill. Between people stopping by to buy the book, saying they heard good things about it or just stopping to say they already read it and wanted to congratulate us, we were quite happy and proud of what we had accomplished. I also helped my friends at SHIMMER at their show that afternoon. Let’s say that between our table, their merchandise table and everything else, I didn’t sit down all day.

Later that day it was direct to Madison Square Garden and the WWE Hall of Fame, but we had to wait 45 minutes to finally have a bus that could bring us to Manhattan where a 15-minute ride took more than a hour because of the congestion. As a result, we missed Terry Funk’s introduction of Mick Foley. It was a fun night, and an historical one with Bruno Sammartino finally being inducted. When we returned it was time for $5 Wrestling back at the convention center. We had a blast touching base with friends and playing along with some of the worst wrestling money can buy. 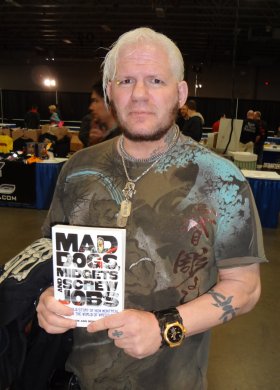 Raven with his copy of Mad Dogs, Midgets, and Screw Jobs.

Sunday was going to be as busy and tiring, but as exciting too. After everything was said and done, we sold quite a few books, including autographed copies from the legends that made Montreal wrestling so unique. We were also able to strike deals with RF Video and Highspots for the distribution of the DVD we put together that includes one hour of Grand Prix and three hours of International Wrestling from the ’70s and ’80s. To cap it all off, we attended WrestleMania Sunday night at MetLife Stadium. We know critics have been hard on the show, but seeing it live was an incredible spectacle that did not let us down. You had to be there in person to appreciate the full set and the undertaking of such an event.

Along our journey, we met many wrestling fans, people we talked to on Facebook or by email but never in person. Many former wrestlers who wrestled in Montreal were in attendance and we were hoping to ask a few more questions about our territory. The big difference between a convention like this and events like the Cauliflower Alley Club reunion, or the induction ceremonies at the Pro Wrestling Hall of Fame in Amsterdam, NY, and the Tragos/Thesz Hall of Fame in Waterloo, Iowa, is that people are here to make some money, and that’s fine too. But it’s harder just to sit down with them and pick their brains on their wrestling career.

I still spoke for two or three minutes with Superstar Billy Graham about him playing for the Montreal Alouettes. I took a picture with One Man Gang, met Montreal International Wrestling former champion Great Samu for the first time, spoke a little to both Angelina Love and Beth Phoenix since we have a friend in common in LuFisto. But for most of them, they were just too busy selling merchandise, taking pictures, signing autographs. But we did get commitments from Bill Eadie and Lex Luger to talk more via email in the future.

The reaction we got for the book is even more overwhelming in person than online. We tried to write a book we would like as fans — and the fans who have read the book got the exact feeling and reaction we were looking for.

It was the first of many wrestling conventions and we’re looking forward to being at all of them. To write about wrestling takes time, knowledge and most importantly you need to be a wrestling fan. And this is what WrestleCon was all about: being a fan!

Here are some neat moments for Bertrand and myself: