NEW YORK CITY – A cliché of wrestling promos is when the guy says “the time for talking is over.”

But talking was the order of the day as WrestleMania weekend kicked off with a press conference to hype the WWE’s annual extravaganza.

Fans got a preview of what to expect this Sunday as some of the participants of WrestleMania’s main events hyped their battles for an assembled crowd of approximately 250 media members who packed the seats in the lobby of the famed Radio City Music Hall. 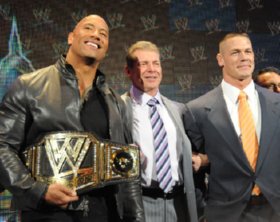 The Rock, Vince McMahon and John Cena, front and centre, at the WrestleMania 29 press conference on Thursday. Photos by Photo by Mike Mastrandrea

The event, hosted by Michael Cole, was a celebration of not only Sunday’s show, but the entire weekend. WWE’s charitable events that will take place during the week – including fundraising for Hurricane Sandy relief and Make-A-Wish were highlighted. Representatives from the governments of New York and New Jersey, including NY Mayor Michael Bloomberg’s office, praised the company for boosting the local economy by bringing in tourism dollars and local jobs.

Of course, no WWE event would be complete without appearances by WWE superstars, and they came out in spades.

Cole’s welcoming comments were interrupted by Fandango, who danced to the stage with a female companion, and told the press how to pronounce his name.

WWE Chairman and CEO Vince McMahon shared his experiences, noting that it was at the first WrestleMania where the term “sports entertainment” was coined. “Nothing can compare to this hybrid of sports and entertainment like WrestleMania.”

According to World Heavyweight Champion Alberto Del Rio, his match against Jack Swagger will be “the most important match of my life.” He also noted that this WrestleMania marks the first in which a Mexican-born wrestler would defend a world championship at the event, making the build-up to his match against the anti-immigration Jack Swagger even more meaningful.

Triple H started to cut a promo against Brock Lesnar when his wife, Stephanie McMahon, came out and reminded him that he was there to talk about the company and all of its successes as a global media force. Stephanie talked about the evolution of Mania from the first event to this one. She noted that with all of the celebrities involved this year, both on the show and through related activities, they could potentially reach 148 million fans through social media.

Mark Henry was up next, and he was brief but intense, like many hope his Mania match against Ryback will be. At one point it looked like he was getting choked up when he talked about his lengthy tenure in the company. “I have been here for 17 years,” he said, “and they have been the greatest years of my life.” He also swore that he would not let Ryback embarrass him by defeating the World’s Strongest Man in his home town. “I was born in Texas, but now I live in Harlem, New York. Sunday is not going to be a good night for Ryback.”

CM Punk was terse during his comments, which were directed to his opponent on Sunday, The Undertaker. “Legends, like streaks, are meant to be broken. On Sunday, I will break the streak, and I will break the Undertaker”. During the post-conference photo session, SLAM! Wrestling asked Punk whether he thought that the closing segment on RAW — which saw his advisor Paul Heyman dress up like the recently departed Paul Bearer and Punk pour the contents of the Undertaker’s urn (perhaps representing Bearer) all over the Deadman — was too controversial. Smiling evilly, Punk said simply, “I didn’t think it was controversial enough.”

Up next was the WWE Champion himself, The Rock. He started off reminiscing about his first match with the company. “Fifteen years ago, I made my debut in WWE at Madison Square Garden. To come back here to New York, to give back to this business, the business that means so much to me, it’s truly an honour.” He then sang the praises of his opponent on Sunday, John Cena. “To make it truly great, you need an opponent that can do that with you. There is no one better an opponent for me than John Cena. No one even comes close.”

Cena didn’t really reciprocate, talking more about the event in general and promising that this year’s edition would even outdo last year’s version which he called “232 minutes of pure entertainment.” With respect to his match, he only predicted “a few surprises, some magic moments, and for all to be entertained.”

And with that said, and after a subsequent photo session that saw all the superstars pose on top of the Radio City marquee, the time for talking came to an end, and the road to WrestleMania got a little bit shorter.

Bob Kapur ain’t as tough as he looks. He bailed on the roast of the Iron Sheik tonight in New York City because something he ate didn’t agree with him. Instead, he wrote this story.