“Bloodthirsty” Bob Kapur is in New York City and New Jersey and will be filing his unique take on things for SLAM! Wrestling. From Thursday’s report, learn how he excited a Bella twin, ate too many Fruity Pebbles, and treasured his visit to the Radio City Music Hall bathroom. 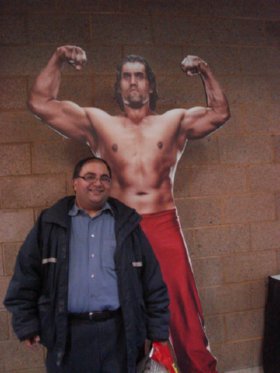 Bob Kapur is the little one, in case you didn’t know. But he DID met the REAL Great Khali today.

6:59am. Arrived at Toronto’s Pearson airport to catch my 8:30 flight to Newark. Can’t believe how many people are traveling to the U.S. today.

7:30am. Enjoying some pancakes and turkey sausages in the Amex lounge at Pearson. Luckily I have NEXUS or would not have got through customs and security in time. If you’re not NEXUS, you’re against us.

9:57am. Heading to the hotel. Airport has huge WWE signs all over, and there are banners on light poles at several points along the highway. There is definitely a buzz in the NY/NJ air about this weekend.

10:35am. Picked up SLAM! Wrestling photographer Mike Mastrandrea from his hotel and headed out to Radio City Music Hall for the Mania press conference.

12:37am. There’s a reception line for media. Big Show’s hand swallowed mine during our handshake greeting.

12:38am. Made one of the Bella twins “pop” by exchanging greetings with The Great Khali in Hindi.

2:07pm. Press conference was fun. Afterwards, press was invited to go across the street for an opportunity to take a photo of the WWE Superstars standing on the marquee. As Mike did that, I started talking to the RCMH staff. Asked one employee, Nathan, how his day is going. “I just want to get the hell out of here – I got things to do,” he answered. I guess not everyone’s feeling the mania after all.

2:48pm. Still waiting for the post-presser photo shoots to begin. I’m getting sympathetic to the disillusioned Nathan. Especially because we’re not getting any actual interview time. Did manage to shake the Rock’s hand, though. That was kind of cool. And I ticked off some of the other photographers by asking Cena a question so that he was looking at me when he answered instead of posing for them. At least Mike got some good shots for SLAM! Wrestling so that’s what matters. 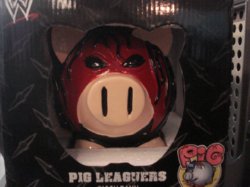 Yes! Yes! A Kane piggy bank for the fiscally conservative under the mask.

3:11pm. Found the RCMH bathroom. It’s amazing. There’s a full lounge up front and then the bathroom which is massive – bigger than most Toronto condos. Made a joke to security about not wanting to leave Radio City Music Hall without visiting the can-can. That joke was funny, but he didn’t get the reference.

3:39pm. Lunch at a local brew pub restaurant. As a wrestling fan, had to try the Red Rooster ale. It was technically great and very under-rated. That’s also funny to people who get the reference.

4:55pm. At the WrestleMania Superstore, a huge store WWE has set up in the Met Life stadium where they are selling all sorts of merch. There are numerous Mania event shirts, t-shirts of various superstars, other clothing items, toys, and other memorabilia. They had these giant cardboard heads of various superstars. The Randy Orton one has about as much personality as the real Randy Orton.

5:07pm. They have a section of shirts dedicated to the Hall of Fame inductees. Bought the ones for Mick Foley and Bruno Sammartino. The one for Trish looks horrible. They could have used any picture of her and it would have been better. Honestly, when I first saw it, I thought it was a picture of ODB. The most expensive thing was an autographed Rock title belt for $2,500. 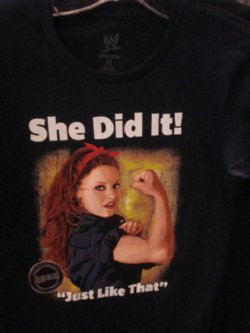 Really — this is the Trish Stratus WWE HOF shirt! Stolen from the set of Bomb Girls, apparently.

6:01pm. Made it into Fan Axxess at the IZOD Centre. Was an interesting setup being in an actual arena this time as opposed to a conference centre like most of the ones I’ve been to in the past.

6:09pm. Here’s the setup. In the arena concourse are a bunch of exhibits and talent signing stations. Some of the exhibits are a HoF section, a display of every one of the company’s championship belts, past and present, and a life-sized Andre the Giant statue. The signers in the concourse are a range of B-level stars like Rosa Mendes and the Prime Time Players, legends like DDP, Ricky Steamboat, Pat Patterson, and bigger name talent like Jack Swagger and Zeb Coulter and Antonio Cesaro (these will change a few times each day). On the floor in the VIP section are A-listers like CM Punk who was the first of them for the weekend.

A Wall of Toys!

8:21pm. Left Axxess as I was feeling sick from lunch. That, or the free Fruity Pebbles that they were giving away at the one display at Axxess. For reference, Fruity Pebbles are better than Cocoa Pebbles. They also had a cool ball pit deal there that looked like a cereal bowl that a bunch of kids were jumping into. I was tempted, but passed for fear of having a Bundy WM3 moment. That one wasn’t really funny, even if you got the reference, but give me a break, I’m feeling sick.

8:51pm. Back at hotel. Tapping out from the Iron Sheik roast at Caroline’s Comedy Club. Still feeling sick and don’t want to risk using a downtown NY comedy club bathroom. Too much information, I know. So out of respect for your sensibilities, I’ll sign off for now.