Imagine yourself in the main event of WrestleMania. You and your opponent are having a five-star match, with the crowd on the edge of their seats simply waiting for what can only be described as the finisher of all finishers to end the night on a high note. You get in position for your finisher, but before the match can properly conclude your opponent trips over the bottom rope and knocks himself out cold. What do you do in a situation like that? 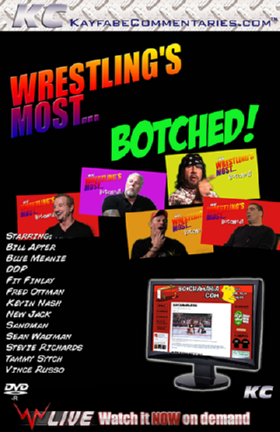 With that in mind, Kayfabe Commentaries presents Wrestling’s Most…Botched. Hosted by Sean Oliver, the video is a countdown show in combination with Botchamania.com that lists what they consider to be the top wrestling botches of all time in a modified panel discussion. It’s not a traditional panel discussion because each commentator is simply talking to the camera. However, certain views or questions brought up by one wrestler are then answered by others during their own commentary.

As always, Kayfabe Commentaries was able to put together a good group of commentators. Of the twelve panellists, ten are wrestlers (I don’t count Vince Russo as a wrestler) which include the Blue Meanie, Sean Waltman, Kevin Nash, Sunny, Stevie Richards, the Sandman, Diamond Dallas Page, Fit Finlay, Vince Russo and New Jack.

Showing he has no problem making fun of himself, before each new botch is debuted, the botched intros by Sean are shown before you get to see what he was trying to say.

A word of warning to those who might find swear words offensive: when the first words of the show are the second most famous ECW chant of “You f***ed up” you should know this is not the PG era of commentating. Those who don’t mind a few (read: a lot) curse words will have no problem watching this.

It’s a great idea on paper, but the end result does leave lots of room for improvement. The biggest problem with the video is the lack of the actual botches being shown. Rather, you see the panel members reactions after seeing the botches (some for the first time while others have those moments engraved into their brains). While it’s probably legal reasons that prevent the examples from being shown on the tape, having to go to YouTube to see the actual botch takes you out of the moment.

The other main issue with the video is Kayfabe Commentaries definition of what a “botch” is. Before watching the video, I thought it would comprise of botched moves such as Sabu breaking his neck against Chris Benoit in ECW. None of the botches in this list actually come from wrestlers botching moves. Out of the five (yes, this is only a top five list) botches listed, I would only consider two of them to be true botches, both happened during promos. Two of the other moments I consider just bad booking with the final moment beautifully summed up by Sunny when she says it’s simply “a painful accident.”

If you were a fan of wrestling during the Monday Night Wars era, I can pretty much guarantee that number one won’t be a shocker to you. However, the wrestler who has the unenviable joy of being number one this time fortunately goes in to great detail over what was supposed to happen and why things went so horribly wrong. But other than learning about the background of the top botch on the list, there isn’t anything new that fans of wrestling will learn.

In the end, it was a good effort by Kayfabe Commentaries, but with just five moments and a runtime of less than an hour, I can’t really recommend this video to anyone who isn’t a die-hard fan of pro wrestling. Hopefully in the future they might be able to put together a Top 10 or a Top 25 list, but for now, this one really isn’t worth your time.