In mythology, Atlas literally carried the weight of his world on his shoulders. This Friday, February 8, at the Border City Wrestling: Can-Am Rising show in Windsor, Ontario, independent standout Phil Atlas will have a task that might prove to be as difficult — taking on Ontario veteran Tyson Dux and the modern-day legend Jerry Lynn in a triple-threat match.

For Atlas (real name Adam Filangeri), it’s a challenge that he looks forward to. While he doesn’t have the same experience as Dux or Lynn, the current BCW Heavyweight Champion is certainly not a green rookie either, with ten years of experience in the sport, including multiple tours across Canada, the United States, and even Japan. 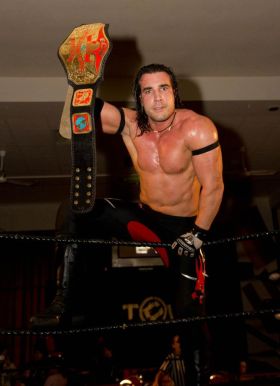 But unlike Lynn, who is currently on his retirement tour — this match will be his last match on Canadian soil — Atlas looks forward to many more years to come. After all, he’s still living his childhood dream.

“I’ve always been a fan of wrestling,” he told SLAM! Wrestling days before the event. “I stumbled upon it when I was about five or six years old, just flipping through the channels. I told everyone at 13 years old that I was going to be a professional wrestler. A lot of people laughed and said it was a passing fad, including my parents. But clearly it wasn’t.”

In Windsor, Scott D’Amore’s Can-Am Wrestling School is synonymous with pro wrestling training, and it’s not surprising that that’s where Atlas went to learn the trade. And he took to it like duck to water.

“I’ve always been athletic,” he said, “but I was never good at any sports growing up. With wrestling, though, I excelled real fast. I was at that age during the Attitude Era that I was really impressionable and I idolized guys like Bret Hart, Shawn Michaels, Mr. Perfect. I took it all in, and I never looked back.”

D’Amore agrees with the assessment.

“Phil has grown into a well-rounded professional,” he said about his protégé. “In my opinion, much like Tyson Dux and Cody Deaner, it’s a travesty that he’s not plying his trade for a company with mainstream television. His many tours, his experience with All Japan Pro Wrestling, he’s one of the crown jewels of Canadian independent wrestling.”

It’s D’Amore that Atlas credits for giving him the philosophy that drives his career: that in order to succeed in wrestling, you have to love the sport.

“He told me that it’s okay to just be a fan of pro wrestling, because it’s really hard to get into. That was before I started training. He told me that if I wanted to have any longevity or success, that I truly had to ask myself if I truly loved the sport. And he was right. It’s not an easy, stable, normal job.”

That’s particularly true of independent wrestling, though Border City Wrestling is regaining its momentum since it was resurrected last August after a three-year hiatus. Atlas won the Heavyweight Championship at that event by beating Dux. In October, Atlas successfully defended against Dux in a steel cage match. While a third match between the two would be a treat for BCW fans, the addition of Jerry Lynn into the mix has the potential to make this an indy match of the year candidate.

“It’s fitting that Jerry will have his final match in Canada here in Windsor,” noted D’Amore. “He headlined so many BCW events between 2000 and 2006. A three-way dance between him, Tyson, and Phil Atlas is a rare chance to see superstars of pro wrestling’s past, present, and future.”

For Atlas’ part, he looks up to both of his opponents personally and professionally, and welcomes the chance to showcase his talents against them — and kick off what he feels should be his breakout year.

“My goal this year is to sign on that dotted line and get myself a contract,” he said. “It’s been a decade, but my time is far from over. I’m nowhere near the top of the mountain, but I’m steadily walking up. I realize that a lot of people say that, but I know what needs to be done. You can’t ignore passion, dedication, and hard work. I want my shot — 2013 is going to be my year.”

To contact Phil Atlas, e-mail him at [email protected], or hit him up through Twitter at @PhilAtlas.