Another big Calgary promotion to debut

Hart Legacy Wrestling is apparently dead after one stacked show in January, and, rising from its ashes is Next Generation Wrestling. 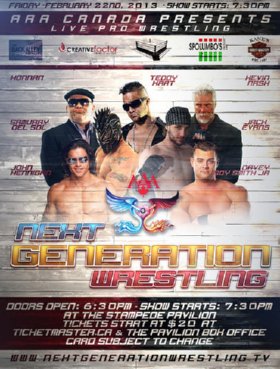 The news quickly began circulating that there had been some backstage issues, and some talent went public about not being paid promptly. Even the hotel sent out a note that it had not been paid.

From this chaos steps Spencer Tapley, who served as the publicist for HLW.

“Calgary proved that they want to support wrestling on this scale again in Calgary, and it is unfortunate that the actions of a few tarnished what so many poured their blood, sweat and tears into,” said Tapley in a press release. “Moving forward we are proud to announce the formation of a consortium of positive people with a wealth of business acumen that will solidify a new beginning for not only the great fans, but all of those dedicated to bringing back a fantastic show of athleticism, action, excitement and formulating lasting memories.”

Next Generation will present its first show at the Victoria Pavilion at the Calgary Stampede Grounds on Friday, February 22, 2013. Doors open at 6:30 with a special pre-show, with the main show kicking off at 7:30pm. Tickets go on sale on Friday February 8th at 10:00am at all Ticketmaster locations, the Scotiabank Saddledome box office, and online at www.ticketmaster.ca.

“All talent is confirmed and has been paid in advance, showing good faith by our new financial partners to support Next Generation Wrestling and its fans,” Tapley assured. “There will be no issues, and we are excited that many of the talents that wowed Calgary before will be returning to the ring for this spectacular night of action.”

There will be a press conference today at Spolumbo’s Fine Foods & Deli in Calgary to announce the formation of the promotion, and on the website, www.nextgenerationwrestling.tv, next week, all the matches will be detailed.

The February 22nd show will be available the next day on iPPV.