For the first time since Pierre-Carl Ouellet in 1993, the World Wrestling Entertainment has signed an independent male wrestler from the Montreal territory. After weeks of rumours, questions and misinformation, according to what I’ve been told, it is now confirmed that El Generico will join the ranks of NXT in Tampa, Florida by early February.

Generico received an early Christmas gift when he signed a developmental contract in December, putting his signature next to WWE’s Executive Vice President of Talent and Live Event Paul Levesque. The physical tests and the working papers were the only things left before it could be official. 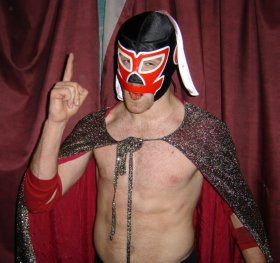 But on January 9th, the rumour machine started way too early when a pro wrestling website released that Generico had signed with the WWE. As in the case of Nigel McGuinness, among others, nothing is official with the WWE until you pass your physical and health tests in Pittsburgh. Plus, for someone not from the United States, you need to get legal papers to be able to earn a living there. So at the time the “news” was released, no one could say if Generico was going to go to NXT for sure.

Hopefully for the “Generic Luchador” the physical results came back positive and there were no problems with his working papers. Therefore, by early February, Generico will be heading down to Tampa.

Rami Sebei started wrestling in Montreal in 2002 for local promotions. His second match ever was for former wrestler Paul Leduc’s promotion. He became El Generico in his first match with the IWS in the summer of 2002 in what was supposed to be a joke and a one-night only type of gimmick. His first big match happened in IWS in a three-way against former WWE’s tag team champion Pierre-Carl Ouellet and a young Kevin Steen. Little did he know at the time that he would cross path with Steen more often than not in the next decade.

His big break was in the fall of 2004 when Generico, Exess, Sexxxy Eddy, and Steen tore the roof down in a four-way match at a CZW event. After that match, he became a mainstay for such promotions as PWG and ROH, winning many championships along the way. Since then Generico has traveled all over the world. Japan, Australia, Peru, Russia, Germany, France and even Sweden are among the 29 countries he wrestled in. His tag team act with Kevin Steen was one of the best in the world in 2007, 2008 and 2009. His feud with Steen in 2010 was voted the best in the world by the Wrestling Observer Newsletter.

WWE’s interest in Generico goes back to the month of June. At the time, the timing was off because he had worked some TNA dark matches in 2011 and TNA’s lawsuit with the WWE delayed any action. Finally, after several months of back and forth communications, Generico got the call he was waiting for since the whole case with TNA was about to get resolved.

His last match in his own province happened on Sunday, January 13th, for a new promotion called BattleWar. After his match with Chuck Taylor, he thanked the fans in his own way. Generico, who was always known to keep the secret behind his gimmick, stayed the same until the end.

“My fans in Montreal deserve the truth. My real name is … El Generico! And yes, I am leaving. I’m going back to Mexico to be with my wife and my orphan children!” If this was his last match in Montreal, his last indy match happened on January 18th in Calgary.

“I wish him the best of luck and I’m extremely proud that a co-worker from Quebec was able to reach the top of the mountain in our sport, not because he had contacts, but because of years of hard work, passion and sacrifices,” women’s star LuFisto told SLAM! Wrestling upon hearing about Generico’s departure.

At this time, no one knows in what shape or form Generico will be remodeled in NXT. Will he wear a mask? Will he be unmasked? Will he keep his Generico gimmick? If history tells us anything, only CM Punk was able to keep not only his gimmick but his full indy wrestler name. Does that mean that the Generico gimmick in which he was so successful won’t be even looked at? No one really knows. What all the El Generico fans out there know is that the WWE just signed a heck of a prospect, who can speak many different languages and, masked or not, is a tremendous worker.

Some may want to wish him the best, others would like to congratulate him but most of his fans would simply love to tell him one last time: “Ole!”

Pat Laprade finds himself lucky to have witnessed Generico’s first match and so many after that. He wants to wish El Generico the best of luck and he’s looking forward to seeing him on TV.