KC Andrews takes to the airwaves to build character

Most indy pro wrestlers try to keep their “day job” under the radar, but that’s not the case for KC Andrews. In fact Andrews went into the radio business to help develop his microphone skills and has found it has made a huge different in his diction, as well as his creativity and ability to properly express himself.

“I get a chance every day to try out new ways to keep people’s attention with a microphone and it makes for some great practice,” Andrews told SLAM! Wrestling.

When he’s working as a Radio DJ hosting the Afternoon Drive show on 97.1 Sun FM in Penticton, BC, he works under his birth name of James Hogan. Perhaps surprisingly there hasn’t been much crossover between the radio and the wrestling. 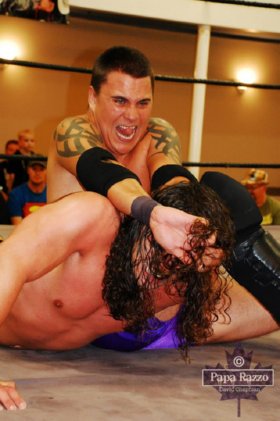 “I try to keep the personae separate because they are so radically different,” said Andrews. “James Hogan, Radio DJ, and KC Andrews, Professional Wrestler, are two completely polar opposite individuals. Plus, I can’t get away with being a jerk on the air. So snapping into ‘KC Andrews mode’ serves as a way to let off steam from the real world.”

Like many, the ultimate goal of the 6-foot-2, 225-pound Andrews is to make a living exclusively as a professional wrestler. Many of those years that Andrews spent pursuing his dream were in London, Ontario until the age of 25 after which he relocated to Penticton.

“Professional wrestling was always a part of my life. My dad introduced it to me at a very young age and it just became something that we watched and shared an interest in,” said Andrews, now 26. “One day, when I was around six, I distinctly remember watching a match on a video tape between Bret Hart and Shawn Michaels, and I turned to my dad and said ‘I’m gonna do that one day! I’m gonna be Intercontinental Champion!’ Of course, my dad just kind of brushed that off as the delusions of a wonderstruck six-year-old boy, but it was always in the back of my mind.” 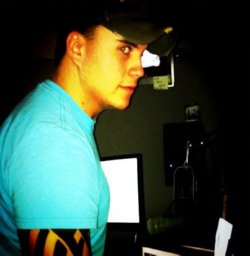 When he’s not KC Andrews, he is James Hogan on the radio.

After he graduated high school, Andrews pursued his goal of becoming a wrestler when he heard about some people trying to open a wrestling school. “I figured it was a step in the right direction, but then, I quickly realized that I was giving money to people who had no idea what they were doing and became discouraged,” recalled Andrews. “I put wrestling out of my mind and decided it was a wise move to go and pursue a post-secondary education.”

He learned that Ontario indy star “Dangerboy” Derek Wylde was living in London, and had access to a training ring. “I reached out to him and after I finished school, I began some light training,” he said. A previous back injury — two herniated discs — limited his initial training.

Dropping from 295 to 205 pounds, Andrews learned wrestling basics from Wylde and kickboxing and mixed-martial arts from the late Shawn Tompkins. “I feel like I have a solid foundation in striking which I like to use to my advantage,” Andrews said. “A lot of what I picked up technically came from other sources, as Wylde always had someone of higher priority to focus on.”

Since his debut on December 28, 2009 in Oshawa, Ontario, at the age of 23, Andrews has wrestled for various promotions in Ontario, Alberta, and British Columbia including CNWA, Big West Wrestling, MPW, PWA, MCW, TCW, GCW, and CCW.

An early accomplishment in his career was a brief tenure as the Tri City Wrestling Heavyweight Champion. “Ah, TCW. I feel like TCW was my baby, as I was there since the beginning. My TCW title reign was so short because I made a series of rookie mistakes. I let my feud with Anthony Darko come first, and became more interested in embarrassing him than being the best. I won a ‘money in the bank’ style battle royal and cashed in the same day on Sebastian Suave. I was very excited to become champion, as it was my first title. I still had Anthony Darko to worry about, but I took my eye off the ball. I agreed to put my title that I JUST WON on the line, and he beat me, plain and simple. This led to not only my loss of the TCW title, but also my exile from Tri City Wrestling altogether. Sebastian Suave and Anthony Darko are both phenomenal athletes, and I feel they brought out the best in me for different reasons.” 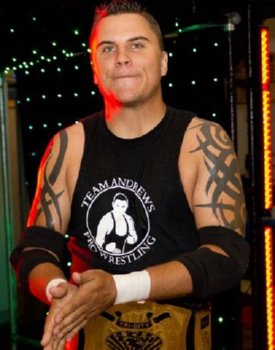 More championships awaited Andrews once he moved to the west coast where he would achieve what he considers one of the major achievements of his career so far, two tenures as the Big West Wrestling Television Champion, the second of which lasted 148 days.

“I’d been telling people in the Okanagan Valley that I was the best for almost a year at that point, and I finally got to prove it by winning a one-night tournament to win the championship,” reminisced Andrews. “I defeated the veteran Black Dragon in the first round, received a bye in the semi-finals, and choked out Collin Cutler in the finals to take the championship. Right away, the politics started and there was an attempt to sabotage my title reign. I won the championship April 28th, and by the first weekend in May, there were waves being made. While showering after a match in Alberta, a group of wrestlers got their hands on the championship and took some compromising photographs. I was accused of ‘unprofessional conduct’ and stripped of the championship on May 18th. I outsmarted the politicians, however by disguising myself as ‘The Mean Machine’ and winning the 2012 Rutland Rumble and my championship back that very same day.”

During his time with Big West Wrestling, one wrestler that Andrews has described as a pesky thorn in his side that kept trying to take his championship is Collin Cutler. Initially Andrews thought he was done with Cutler after beating him in a Last Chance Match in June, but when Bobby Sharp didn’t make it to a Big West Wrestling Show in October for a CNWA National Championship match, it was decided without that the winner of a battle royal would get an immediate chance at his title. “Well surprise, surprise, Collin Cutler won the battle royal,” said Andrews, rather dismayed. “This caught me off guard as I was under the impression he was out of chances. He caught me off guard, and he stole my championship. The fact remains, however that I was the first and longest reigning Big West Champion, I featured that championship in THREE provinces, and I still have a rematch clause in my back pocket, so Cutler should watch his back; especially now that I’m in charge of Big West Wrestling.” 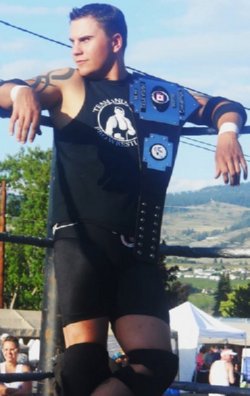 Another person that Andrews has feuded with in Big West Wrestling has been wrestler and promoter Marty Sugar who had some choice words when asked about Andrews. “As a promoter, the best thing that’s happened to Western Canada in the past years has been KC Andrews moving to the Okanagan: the kid has all the tools and is a bonafide main eventer,” Sugar told SLAM! Wrestling. “How he was stuck toiling in obscurity in Ontario, I will never know. As a wrestler, though I hate his guts: he’s been a pain in the backside for two years, and has effectively gone out of his way to ruin my life. I look forward to punching him in his smug face, repeatedly, throughout 2013.”

Out of those he’s faced in the ring, Andrews feels that Bobby Sharp and Collin Cutler share a few things with him — they’re all young, talented and all want to be recognized as the best of the best.

“Bobby Sharp is, to his credit, one of the best professional wrestlers I’ve ever stood across the ring from, and he will go places, without a doubt, but I refuse to be the stepping stone that propels Bobby Sharp into what could very well be MY spot,” Andrews emphatically stated. “I have a lot of respect for Bobby and what he’s done, but I want what he’s got. To Bobby’s credit, he knows that and he knows what being the CNWA National Champion means, but it’s only a matter of time before he slips up and I will be the one to capitalize on that. Cutler is very much the same, he’s a talented, driven athlete, and deserves all the credit in the world, but at the end of the day, there can only be one guy on the top of the mountain, and I want that guy to be me.”

Despite only having met him a year ago, Sharp feels Andrews is perfect for wrestling. “He is an over-the-top guy in the locker room and even more so in the ring, he is what I call the ‘perfect foil’ for any type of good guy in wrestling,” said Sharp. “It’s very hard to get noticed in indy wrestling, especially in Canada, and KC Andrews has gotten himself noticed by big players in this scene very quickly. He has the passion to succeed and he has pretty much transformed himself over the short year I’ve known him into a dominant player.”

In recent months Andrews has established a tag team with former opponent Kyle Sebastian, who he feels has an unlimited amount of talent, skill and charisma. 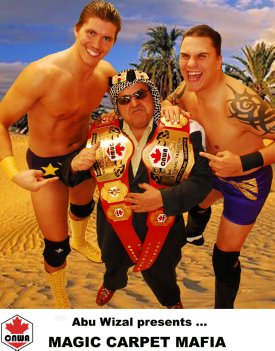 “Kyle Sebastian should have a contract,” Andrews relayed to SLAM! Wrestling. “I firmly believe that. We had some very good matches against one another, and it developed a mutual respect and a friendship. We’re now tag team partners, and I feel that we mesh well and communicate better than any team out there; 2013 will be our year, and it starts February 2nd when we win the CNWA National Tag Team Championships officially.”

Since moving out to British Columbia, Andrews has come to consider wrestler and author Vance Nevada one of his mentors. Nevada said that with Andrews there is more than meets the eye. “When Andrews was first appearing in British Columbia and I heard that he trained in Ontario, I had a mental picture of what that looked like,” recalled Nevada. “In my experience, that region has always been a little more ‘new school,’ so that’s what I expected. He very quickly established that he can’t be classified in one category. He excels at new school (high tempo) wrestling, he is capable on the mat with the old school guys, he’s without rival on the microphone, and he is one of the true road warriors of his generation, not afraid to pay dues and travel unimaginable hours for the opportunity to grace audiences in every remote community across the country with his presence.”

As for future goals the one from when he was a little boy, to be the WWE Intercontinental Champion is still there, but since he has grown older he’s started thinking more practically about wanting to simply make a comfortable living doing what he loves. “My short term goals are definitely international exposure and eventually a tryout with one (or all) of the ‘Big Three.’ I would love to wrestle in Atlantic and Central Canada this year, as there are still a multitude of places I haven’t had a chance to see yet. I have doubled my efforts in the gym recently in an attempt to add the ‘visual it factor’ to my in ring work, as I feel that both my ring technique and charisma are solid, but my look could use some work.”