Just because he’s a true “legend” doesn’t mean that WWE Hall of Fame manager Jimmy “Mouth of the South” Hart is ready to pack it in. More like packing his bags, as he travels between appearances and events all around the world. SLAM! Wrestling was lucky enough to get onto Hart’s busy schedule to discuss everything he has going on now — and even more things that he would like to add. 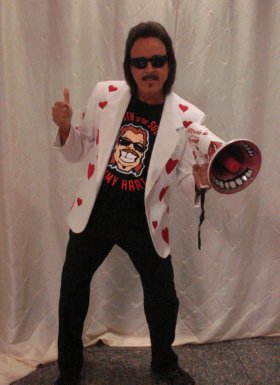 Jimmy “Mouth of the South” Hart doesn’t look all that different than he did 30 years ago. Photo by Bob Kapur.

Next weekend, Hart will be heading to Poland for a unique event that combines pro wrestling with two former boxing superstars.

“It’s an event for Rivalry Championship Wrestling,” he explained in his rapid-fire southern drawl (such that it sounds more like he says rasslin’). “Andrew Golata and Riddick Bowe are two boxers from the past, but this time they’re going to be wrestling in a steel cage. Taskmaster Kevin Sullivan is going to manage Riddick Bowe, and I’m going to manage Andrew Golata.”

Though strange, it’s certainly not the first time that Hart has mixed it up with celebrities in a wrestling context. Indeed, in 1982, Hart paired up with comedian Andy Kaufman in his legendary feud with Jerry “The King” Lawler in what many say was one of the greatest worked angles of all time. Hart has nothing but praise for Kaufman and would welcome him with open arms as a fellow inductee into the WWE Hall of Fame.

“Andy was great. He was on Taxi, but he loved rasslin’. When he came down to Memphis, I managed him for a year and a half off and on. He loved rasslin’ so much, I think he was more into that than he was the acting. We had a lot of fun. I would love to see him the WWE Hall of Fame — I think he (has a chance) to go in this year, because I think they’ve almost run out of everybody else.”

With respect to Lawler, Hart’s comments were taken a day before the King’s unfortunate heart attack. Then, Lawler had just had a couple of recent matches on TV, and Hart’s comments reflected the amazing performance that Lawler had put on.

“Watching the show, I was so proud of him. I’m hoping the ratings were good for him, but I haven’t seen them yet. Any time anyone from the past gets in the ring with these guys, I want the ratings to do well. Well, I want them to do well no matter who’s fighting, but I always look forward to seeing some of the guys from the past in there. Lawler says the key to his youngness is a younger woman. I always told him, ‘King, two old batteries never ever started nothing.'”

As for the secret of staying young, it seems that Hart may have actually discovered it himself — indeed, up close he looks almost the same as he did when he was regularly on TV in the ’80s and ’90s.”

“No liquor, no drugs,” he revealed, “that’s the key. So, now I’ll probably get run over by some dope dealer who’s drunk driving when I leave here,” he joked. “No, seriously, that’s what I’ve always done. I’ve always said, it’s not about the age, it’s about the mileage. Some people who are 40 look 20, and some people who are 20 look 40. You’ve just got to take care of yourself. I was that way back when I was in WWE, WCW, even back in my rock and roll days.”

Speaking of those days, Hart was proud to talk about a recent honour he was part of — the induction of his old band from the 1960s, the Gentrys into the Beale Street Brass Note Walk of Fame. 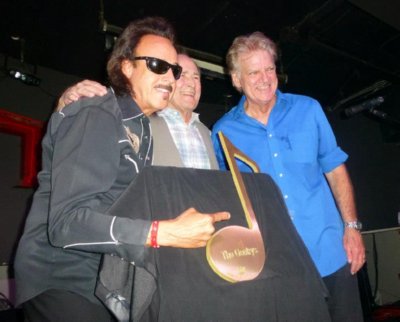 Jimmy Hart and the Gentrys are honoured at the Beale Street Brass Note Walk of Fame.

“Believe it or not, all seven of us are still alive,” he said, “so we were all able to make the ceremony. They put up a big brass musical note up for us listing all of our achievements, like our million dollar seller ‘Keep on Dancing.’ Our note is right beside Elvis and Jerry Lee Lewis. A lot of friends from high school came out for the ceremony. It was great to see all those people we grew up with.”

“Man, we had a time,” he continued about his run with the band. “We toured with the greats — The Beach Boys, Sonny and Cher. We did a lot of the Dick Clark shows.”

In fact, it was Clark who gave Hart some memorable advice about performing, advice that Hart would use to great acclaim later on in wrestling.

“People always ask me why I carry the megaphone and wear the flashy jackets. Because Dick Clark said something one day at a meeting before we went out on stage. He said, ‘Remember one thing. If you dress like the audience, one day you’re going to wind up sitting in the audience.’ Which means, look different, be a little different.’ It’s the same in wrestling today. If you’re wearing a shirt that someone in the audience can buy, then why should they buy a ticket to see you?”

In light of today’s wrestling product, the ability to differentiate one’s self is even more important, as it seems that there are not a lot of the same colourful personalities as there were back in Hart’s days. Some of the ones that particularly stand out for him today are CM Punk, The Miz, and Heath Slater.

“I did Smackdown a few months ago, and I did a thing with Heath Slater. He went out and said, ‘Jimmy Hart’s going to make the next Honky Tonk Man,’ and who knows, that might have given him the idea of doing all the rock and roll stuff. I’d love to cut an original song for him, and have him sing it, like we did for Honky.”

So does that mean Hart would be interested in a full-time managerial role? Even though managers are not as prevalent as they were in Hart’s days, until recently, Vickie Guerrero was playing a managerial role, and Paul Heyman is doing one as well. How does Hart feel he would fit in among those two?

“I think Vickie does great. And I’m glad to see Paul back. I love what Paul did in ECW — he took a lot of guys that were short, skinny, bald, tall, and made them into stars for that era. I think he did a great job. My main thing, I don’t mind doing TV, but it’s got to be the right thing. To go out there and do it just to do it, that doesn’t mean anything.”

Besides, it’s not like he isn’t already busy. After coming back from Poland, Hart will continue his numerous appearances, at conventions and indy shows, and perhaps some more WWE dates.

“I still do some Make-a-Wishes for WWE, and hopefully will come up again for the Hall of Fame autograph sessions. I have so much fun seeing fans and meeting all the people. Of course, Hulk [Hogan], has got a new beach shop open in Clearwater, so he got me — ‘Jimmy, come on over here, brother,'” he said, doing a flawless Hogan impression, “to come down there and do stuff with the Hulkster for that.”

Bob Kapur doesn’t know what the word “gentry” means, even though he’s heard it a thousand times in the opening theme of Married… with Children. E-mail him the definition at [email protected].