WWE’s Collector’s Edition Brock Lesnar Here Comes The Pain! requires a very different approach in order to review it; this is due to it re-using material from an earlier DVD release by the WWE of the same name. The most prominent portion that was re-used is the documentary which ends a couple of months after WrestleMania 19.

In many ways though, the documentary is still entertaining, but more in an ironic way considering the majority of those interviewed in it are no longer with the WWE and the fact that it’s clear there was a belief that Lesnar was being positioned to be the flag bearer for the company for the next decade. It’s a shame that the WWE didn’t tack on some additional chapters to it detailing Lesnar’s departure from the company shortly after WrestleMania 20, as it would have been pretty riveting. 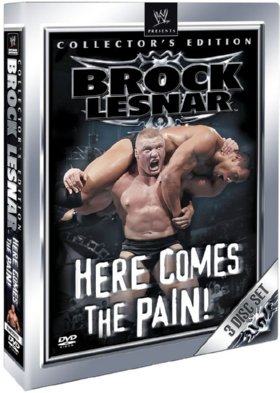 However, sprinkled throughout the two-disc Blu-Ray version that was reviewed were snippets of an interview conducted shortly after Lesnar returned to the WWE in the summer of 2012. In these interview portions Lesnar comes across very honestly in how he came back for the money and to legitimize the WWE in a way only he could. While how he expresses these claims is somewhat harsh he does have a point. When you watch Lesnar in any matches whether during his time in WWE or in the UFC they always came across as main event spectacles that you had to see. Yet, strangely enough during these interview clips Lesnar does not talk much about his time in UFC except to detail how he went there because he wanted a bigger challenge and some of the different disciplines he learned while he was there. Part of this reluctance to discuss his feelings about his time in the UFC may be due to whatever legal agreement was arranged between the UFC and the WWE so Lesnar could work for them again. In any event these interview portions do give the viewer a real sense of where Lesnar is at mentally nowadays, but his opinions about working for the WWE again do appear to be a bit measured.

The one thing this release does have compared to the earlier one is a lot more matches. The first two matches are from Lesnar’s stint in Ohio Valley Wrestling and one of them is really interesting since it’s against Batista, who was wrestling under the name of Leviathan at the time. The match is very hard hitting and there is even a swerve at the end that leads to a somewhat surprising winner.

The next couple of matches come from early 2002 and feature matches against Jeff Hardy, Rob Van Dam, Hulk Hogan, The Rock, Randy Orton, and The Undertaker. Perhaps one of the more interesting matches due to its psychology is a tag match teaming Lesnar with The Undertaker against Rob Van Dam and Ric Flair. The match demonstrates how effective Lesnar was at telling a story in a ring and also making smaller opponents such as Ric Flair and Rob Van Dam seem like they had a chance of winning. The match against Hulk Hogan is also very compelling, but more due to its brutality as it left Hogan pretty bloodied by the end.

With the dawning of 2003 the collection moves right to the 2003 Royal Rumble match and the lead-up matches to the WrestleMania 19 match against Kurt Angle. These and later ones featuring Angle are some of the best included and demonstrate for those who didn’t get a chance to see them the first time they aired how good Angle was at that period of his career and the chemistry he had with Lesnar in the ring. A great Iron Man match between Angle and Lesnar from Smackdown that aired on September 18, 2003 really demonstrates the quality of the rivalry between the two and what they were able to do together.

The Blu-Ray version contains even more matches including the brutal Extreme Rules match against John Cena from April of 2012. Unfortunately, the SummerSlam 2012 match against Triple H wasn’t included which is a small complaint when you look at the wealth of matches that were included.