November 1st signifies the start of one of the most meaningful fundraising campaigns for men across the world – Movember – and wrestling’s greatest “Mo Sistas” is releasing a special edition DVD to coincide with the start of the moustache growing season. 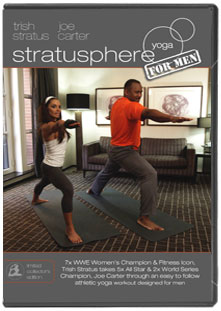 Trish Stratus, former 7-time WWE Women’s Champion, will be opening her online store tonight at midnight with a special edition of her new Stratusphere Yoga for Men DVD. Teaming with Toronto Blue Jay legend Joe Carter, the special release tonight will be signed by both Stratus and Carter with a limited run of just 20 copies to commemorate the 20th anniversary of the Jays’ first World Series Championship.

Partial proceeds from the sale of these DVDs, along with standard copies of the recording sold in November, will be donated to Movember Canada, which supports prostate cancer and men’s mental health research and advocacy.

The fit of a DVD focusing on yoga and Movember was natural for Stratus, who has been supporting the cause over the past few years.

“The health benefits of yoga are really incredible,” says Stratus, who has operated her Stratusphere Yoga studio in Toronto since 2006. “Yoga not only gets men active – a key component of improving your mental state especially in the winter – it gets them thinking about other aspects of their lifestyle, especially diet, which can help combat the on-set of prostate and other cancers.”

For Stratus, battling the stereotype of yoga not being a “manly” exercise was an obstacle to overcome. Though she’s trained NHLers, CFLers and current and past WWE superstars at Stratusphere and through her various DVDs and products, she recognizes that getting men off the couch and onto the yoga mat. She believes that teaming up with Carter, who was an integral part of the Toronto Blue Jays’ back-to-back World Series victories in 1992 and ’93, will show doubters that it’s not only a rugged form of exercise, but physically challenging as well.

“Joe was a true pro to work with,” Stratus remarks. “He not only went through every pose, no matter how challenging it was, but he has been a great partner in telling guys that yoga isn’t for sissies.”

Stratus’s unique brand of yoga, which combines traditional poses with strength training, has become a phenomenon in the yoga world. Fans who remember the ambitious Toronto native’s climb to the top of WWE – from longtime fan to valet to one of the greatest in-ring performers the women’s side of the squared circle has ever seen – likely aren’t surprised by the amount of success she has had in the yoga world. Now, taking aim at the male population is the next hurdle for Stratus in her pursuit to improve the health of the North American population.

“Anyone who knows me knows that I will do anything I can to spread the good word about the benefits of healthy living,” she says. “You never know what I’m going to come up with next; the only thing that’s certain is that Stratusfaction, as always, is guaranteed.”

Stratusphere Yoga for Men is available exclusively at trishstratus.com.