Steen and Elgin top best ROH show of the year

Ring of Honor produced Saturday night in Mississauga what many consider the best show since Sinclair Broadcasting Group took over more than a year ago. The main event was a throwback to the old ROH style with a 30-minute hard hitting contest for the ROH World championship, featuring two of the best Canadian wrestlers today: champion Kevin Steen and challenger Michael Elgin.

The writing was on the wall ever since the last time ROH ran the Toronto market. On May 12, Kevin Steen beat Davey Richards to win the ROH World title. At the time, Michael Elgin was on a big push coming out of his match with Richards that was so much talked about. It was only natural that five months later, Steen and Elgin would go head-to-head in both guys’ hometown. 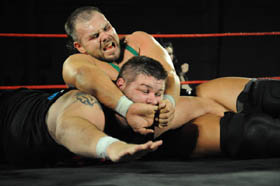 Michael Elgin squeezes Kevin Steen for all he’s worth. Photos by Mike Mastrandrea

Even though Elgin is billed from Toronto (he’s actually from Oshawa), the crowd was pretty much 50-50 on this one. Throughout the match, the dual chants of “Let’s go Elgin,” “Kill Steen Kill” could be heard from the 1000 fans in attendance.

The two big men tested their strength right from the start with some shoulder tackles. Elgin held Steen with a standing suplex that lasted 20 seconds, quite a feat considering the size of the champion. The match was pretty much power move after power move. Flying tackle from Elgin, powerbomb on the apron by Steen, side suplex from Elgin, big neckbreaker by Steen; it was exactly what one would expect.

At one point during the match, Roderick Strong, who was sitting in the front row for the match after bailing out on Truth Martini earlier in the evening, grabbed Elgin’s hair. Elgin lost it and brutally sent Strong back to the dressing room.

Then Steen and Elgin exchanged close falls and submission holds, Elgin with the crossface and Steen with the sharpshooter.

And the insanity continued.

F-Cinq turned into a crossface, slow motion suplex, knee strikes, strong clotheslines, powerbomb in the corner, running cannonball, sleeper suplex, it was as hard of a battle as it could be.

Before the match, Steen had announced that the ban on his Package Piledriver was lifted. It was just a matter of time before he used it, but to the surprise of everyone in attendance, Elgin kicked out at two. Steen went for another running cannonball in the corner, but Elgin caught him and turned it into another huge powerbomb, followed immediately by a spinning sit-out powerbomb for another two count.

Finally, as Steen was sitting on the top turnbuckle, he turned Elgin’s offense into a Package Piledriver from the second rope for the ultimate pin.

“I had a lot of tough opponents since I won the belt, but as tough as all of those other opponents were, Elgin set me to the limit more than anybody else. And I’m glad this is done and over for now,” Steen said to SLAM! Wrestling after the match.

“I think that it was something special. I feel that the ROH World title means something, and a war like that helps people feel that way too. Matches like that define title reigns and define guys who deserve to be in the top spot,” said Elgin, who’s having a breakout year with ROH.

“It shows then when I get the opportunity to shine, I do. It shows that every time I say how important the title is, I mean it. I put it all on the line in big time matches to show that I am for real,” he added. 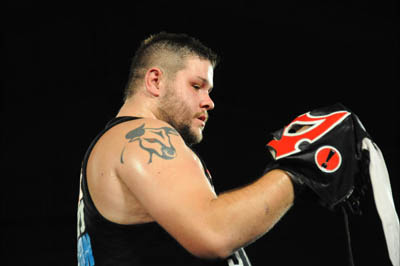 After the match, Strong attacked Elgin and kind of shook hands with Steen. Maybe another member of S.C.U.M. is on his way?

But it wasn’t over yet.

ROH color commentator Nigel McGuinness stepped in the ring and handed a package to Steen, telling him that he’d been instructed to give the champ the box in the event he kept the title.

Steen opened it only to find an El Generico mask. The crowd instantly chanted the famous “Ole!” chant and the DJ even played the song. Steen went nuts and forced the DJ to put his music back on.

When asked about it, Steen was still pretty upset.

“No comments,” he simply answered before walking away from the SLAM! reporter, therefore ending the interview.

With Final Battle in New York City in two months, Steen and Generico have a very good chance to main event together one more time in what would be their first match-up in ROH since Steen became champion.

Although the main event was a great storytelling match and one of wrestling’s best this year, this card was far from being a one-match card.

Adam Cole against Eddie Edwards was an excellent match. Cole is really showing he can dance with the best and is climbing the ladder in ROH. Cole beat Edwards to retain the TV title. Jay Lethal versus Davey Richards had high expectations from the fans and they delivered with another excellent match. It was a pure wrestling contest that would’ve made proud the Nigel McGuinnesses and Bryan Danielsons

of this world. Lethal won with the Koji Clutch. Steve Corino and Jimmy Jacobs managed to keep their tag team titles by defeating Mark and Jay Briscoe in a fun and entertaining contest.

In the other matches, Caprice Coleman and Cedric Alexander beat The Bravado Brothers, Mike Bennett accompanied by the lovely Maria Kanellis defeated Mike Mondo (Mondo did the spot of the night, diving from the scaffolding over the entrance), Wrestling’s Greatest Tag Team beat Rhett Titus & BJ Whitmer, and Tadarius Thomas defeated Rhino. After the match, Rhino press slammed Truth Martini outside the ring on top of the guardrail in what seemed to be the end for the House of Truth.

A quick note on the dark match as three Canadians were part of it. Toronto’s Rip Impact and Chaz Montana defeated Montreal’s Mathieu St-Jacques and Toronto’s “Psycho” Mike Rollins in a tag team match.

Ring of Honor will be returning to Toronto on May 4, 2013, at the Ted Reeve Arena.