Mat Matters: Overwhelmed at Legends of the Ring

MONROE, NJ — I am sitting here in my hotel room after my first Legends of the Ring event, going through the photos submitted by photographer George Tahinos, and I keep going, “Didn’t see her,” “Didn’t see him.”

It was that busy and that confusing at times.

I have not been to a convention like this since April’s WrestleReunion in Toronto, but then that was over a couple of days, and I ran a breakfast as a fundraiser for the Pro Wrestling Hall of Fame, so got to see almost everybody in town at some point.

But LOTR, as the say, was a whole different kettle of fish.

It’s a one-day affair, roughly from 8:30 a.m. to 3 p.m., at the Crowne Plaza Hotel in Monroe, NJ. While we got in around 7:30 p.m. on Friday, because of the location, just off the New Jersey Turnpike at a hotel sort of the in middle of industrial parks, so many people came in just for the day. New York City and Philadelphia are roughly an hour on either side; I talked to one couple who woke up at 3 a.m. and drove up from Baltimore just for the day. 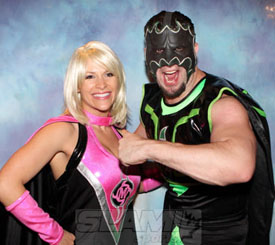 A Hurricane came through, along with Mighty Molly, and I didn’t get to say hi to either. Photo by George Tahinos.

Maybe I have just been spoiled for so long, going to the Pro Wrestling Hall of Fame events in Amsterdam, NY, or the George Tragos/Lou Thesz Hall of Fame induction weekend in Waterloo, Iowa, or, especially, the three days of the Cauliflower Alley Club reunion in Las Vegas. At all those events, you get a chance to meet and mingle, sit in the bar, go out for lunch, hang out, even play cribbage. Those are events that celebrate achievements in wrestling and promote the brotherhood of it all.

By contrast, Legends of the Ring 15 was about making money.

The main reason I was even in New Jersey was to promote my new book, The Pro Wrestling Hall of Fame: Heroes & Icons. My co-writer, Steve Johnson, came up from Richmond, VA, and J.J. Dillon, who contributed the foreword, was at our table. Good friend Paul “The Butcher” Vachon was there too. So I am hardly innocent of the whole wanting to make money thing. (CHEAP PLUG: Information about buying the book is here!)

There were tables with all kinds of memorabilia: photos, figures, magazines, cards, and so much more. Vendor guests were everywhere, and I mostly got to at least see them in the room, if not chat or interact. Take Angelina Love, for instance. I knew her back in Toronto when she was Angel Williams, but I didn’t get a chance to say hi (and maybe I am only fooling myself that she would remember me anyway).

The whole superticket idea, which means that fans pay a set fee and get autographs and/or photos from all the names on the docket meant that those chosen few were sequestered away and did not make their way to the main vendor room (where, naturally, they would have been swarmed for autographs). So I never got to say hi to Jacques Rougeau Jr., who wrote the foreword to my first book, The Pro Wrestling Hall of Fame: The Canadians, back in 2003. That was also my last trip down this way, for a fan fest in Totawa, NJ, which happened to be in the middle of a blizzard.

I had a great time at Legends of the Ring, and got to actually meet a few people who have contributed to the site that I have never met, like the aforementioned George Tahinos, or see a couple I only see occasionally, like Christine Coons and Bryan Sokol. Dillon and Vachon are class people, and it was great to hang out with them and attempt, as best I could, to keep all the demand for autographs and books for them straight.

There were a couple of neat moments for me:

Will I be back to Legends of the Ring? Probably, but I would approach it differently. I had hoped to get a few interviews done for the site, but truthfully, there were times I didn’t have time to pop out to the bathroom.

The next LOTR event is WrestleMania weekend in 2013, and there’s another one in June 2013. I was privy to a little of the talk of the headliner for that, and know it would be a big deal.

Even if I never got a chance to meet said superstar.