Rock vs Cena DVD heavy on hype, short on magic

Rock vs. Cena explores the 14-month lead-up to WWE’s most prominent event, WrestleMania XXVIII at SunLife Stadium in Miami, Florida on April 1, 2012. The DVD package is aptly named Once In a Lifetime, because there is a good chance Rock and Cena never headline another major wrestling event together. The main reason being one of these WWE superstars has five major motion pictures debuting in 2013, while the other appears in made for TV movies backed by WWE’s production company. Do the quick math! 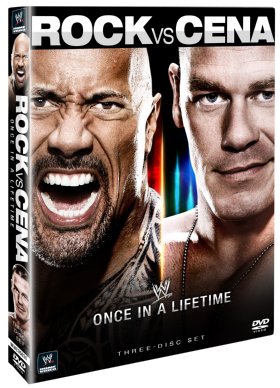 Disc 1 heavily examines The Rock’s return to the WWE after a seven-year absence and the development of the Rock/Cena rivalry. The biggest challenge the WWE had was taking two iconic faces and pitting them against each other, and the angle constructed attempts to appeal to both wrestlers’ fan base. Cena plays the loyalty card, accusing Rock of bailing on the company for the bright lights of Hollywood ultimately opening the door for one of the greatest comebacks in WWE history.

However, it is abundantly clear why Cena has stayed loyal to the WWE, you cannot make it in Hollywood playing Fred’s Dad in Fred 2: Night of the Living Fred. The Rock, on the other hand, uses his best asset, his meticulous mic skills to work the crowds with ease, while Cena awkwardly performs rap songs about The Rock’s lack of dependability. Throughout the documentary it is obvious that The Rock is a WWE icon and Cena pales in comparison on almost every level.

Albeit touching, the back story on each wrestler provides little insight that the average wrestling fan doesn’t already know. Yes, Cena was a long shot to become the face of the company and is an incredibly nice guy, but most of Cena’s rise to superstardom, if not all, has been already been packaged in the three previous Cena WWE DVD releases. What more could be revealed about The Rock? Simply put, he is ecstatic to be back.

For much of the main feature, both men have a refreshing and honest mutual respect for each other. Some of the most enjoyable aspects of the DVD are the backstage footage and, at times, critical commentary from other current WWE superstars. The Rock may have been welcomed back with open arms by the WWE and his fans, however it is clear that other wrestlers specifically, CM Punk, reveal their frustration with The Rock’s ability to steal the spotlight from other Superstars in the company.

The WWE’s utilization of social media is also a main focus of Disc 1 providing an interesting and trendy on-line look at the WWE’s strategy to maintain a feud for 12 months prior to the match. Both comical and brilliant, Rock and Cena battle over Twitter while their nearly six million followers salivate to see who said what next. It is no surprise Rock wins this battle as well.

The main features ends, as it should, with fantastic behind the scenes footage just before the WrestleMania XXVIII event. Wrestlers’ debate about who needs the victory more: Rock who must prove he still has what it takes or Cena, a wrestler trying to validate his reputation. The sad truth revealed as the DVD comes to its conclusion is Cena is not the superstar that can lead the WWE into the future. The main event had 70,000 fans cheering for The Rock proving the WWE’s strategy failed miserably. Fact is, not many fans went home devastated when Cena lost the match. One could argue the main feature is a dagger in Cena’s legacy.

The fact that the event was billed several times as the greatest match of all-time staring two icons in their prime is further proof that even the WWE knew it was faking the funk. Better than Andre vs. Hogan, the most anticipated match ever? Better than Ricky Steamboat vs. Macho Man Randy Savage, arguably the greatest match of all time? Better than Bret Hart and Stone Cold Steve Austin in WrestleMania 13? A match with the perfect combination of story telling, execution, and performance form Austin which, despite losing, earned him the top spot in the company for close to a decade. All wrestling fans allow their emotions to be manipulated to a certain degree with the best story telling suspending belief. The Rock and Cena was good TV, but it didn’t provide the unforgettable moments we remember as kids growing up.

As per usual, the WWE used its hype machine scrupulously to get its fans to believe that The Rock vs. Cena would be epic, but in the end it only proved that it is impossible to manufacture magic. Feel free to disagree, but there is a reason why the WWE lured The Rock back to the squared circle and why he won the match. Without him, there is no headliner, no star, and no incredible finish.

Although rather short (43 minutes) even the average wrestling fan would immensely enjoy this documentary on the lead up to WrestleMania XXVIII.

The special features on Disc 1 are filled with stories about Rock and Cena’s generosity, humour, and how both have overcome adversity in their lives and career.

Using Raw as their main vehicle to promote the big event, Disc 2 and 3 dissect in detail the most important Monday night moments building the hype for Cena vs Rock. Additional notables included are the WrestleMania XXVIII press conference, pre-match musical performances from MJK and Flo Rida and the main event match. Without question, the special features and content on Disc 2 and 3 will satisfy fans of both The Rock and John Cena.

In his spare time, Toronto’s Jay Petroff referees impromptu matches between his three children aged 6, 4 and 2. Jay can be emailed at [email protected] or follow him on Twitter @JayPetroff.