MONTREAL — Friday night at the Pierre Charbonneau Center, Rowdy Roddy Piper made Montreal his playground for a night. Along with Abdullah the Butcher, who was present to receive a plaque commemorating his wrestling career, Piper was in every corner of the T.O.W. wrestling card. “The first time I was in Montreal, I was 15 years old and under the tutelage of Mad Dog Vachon, Edouard Carpentier, Jos Leduc and many more. Montreal will always have a special place in my heart Piper,” told SLAM Wrestling. 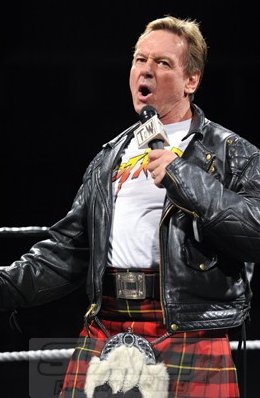 It was the tenth wrestling card for T.O.W. (Top Of the World) which is the brainchild of three-time WWE tag team champion Sylvain Grenier, along with Marc Blondin and Jean Francois Kelly, all three make up the Reseau Des Sports (Quebec’s version of TSN) weekly TNA French broadcast. With their marketing strength and exposure and the numerous sponsors, this organization has all the tools to stick around for many years to come. Although the crowd was disappointing by TOW standards — about only 550 fans showed up — they were treated to a charisma clinic by the Rowdy One.

From the start, all VIP ticket holders to T.O.W. “Stardom” could enjoy the “Piper experience,” a meet and greet along with autographs and pictures, Roddy Piper was as gracious as wrestling fans have grown to expect from him. Taking his time to chat with every one that met him, he was all smiles and grateful for all. His son Colton was along for the ride.

After a 30-minute delay, the show began with Booglie beating Genesis followed by a tag team affair with the Titans taking the win over Pat Guenette and former IWS champion Green Phantom.

Then it was time for Piper, running a Piper’s Pit segment in the ring. The main focus was Piper explaining to the crowd why Samson had to back out from the four-way finale; naturally Piper ridiculed him in front of ecstatic fans. Then, in rapid succession. came TOW commissioner Marc Blondin, current Ring of Honor World champion Kevin Steen, former WWE tag team champion Sylvain Grenier, and Franky the Mobster. Once everyone had a short moment addressing the crowd, Piper took about two and a half seconds to trash everyone and send them to the dressing room, much to the delight of the fans.

The next match had Darkko putting Handsome J.F. to rest in a casket match, followed by Dru Onyx and Eric Mastrocola making minced meat of Sexxxy Eddy and Leon Saver. TNA star Tara, who was scheduled to go up against the Queen of Hardcore Lufisto, couldn’t make it due to passport problems (she forgot it at home!) so Kalamity replaced her in a very entertaining match that showcased both wrestlers’ talents and was certainly appreciated as one of the favourite matches of the evening.

The main event, now a three-way cage match for the vacant T.O.W. championship title, pitted Grenier against Steen and Franky the Mobster, with the supposedly retired (from a back injury) Samson as a referee and Roddy Piper as the enforcer outside the ring to make sure Samson called it straight. This was easily the best match of the evening with a variety of high flying and power moves from three excellent wrestlers. The triple story suplex was something to be seen, getting a loud “holy sh–!” chant from the crowd.

But whenever you put a heel as a referee, there’s bound to be trouble as was the case here. Piper had to get into the ring to let Samson know he was doing a lousy job. After getting ridiculed and slapped a few times by the ref, Piper took matters in his hands, went ballistic and gave the youngster the beating of his life. Hot Rod threw him out of the ring and took over as a ref to finish the match. Grenier took the win and the championship belt by climbing over the cage while Steen and Mobster were crawling to the door — but too late. 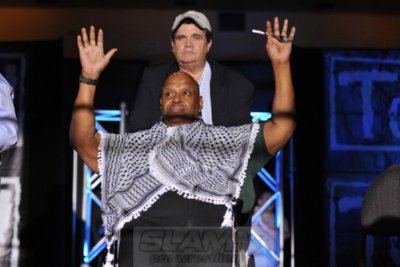 Abdullah the Butcher is honoured.

Abdullah the Butcher was honoured during the show, receiving a lifetime achievement plaque and Lamborghini wine. He then took the microphone to apologize to the fans for showing up in a wheelchair, as he is scheduled to have hip replacement surgery in two months. He did tell SLAM! Wrestling that he’s planning to wrestle again once healed.

“I’ve lost dozens of pounds and still feel great. I WILL wrestle again anyone who dares,” he vowed. When asked about his best memories of wrestling in Montreal, only two words came out: “Women and money.”

A tribute video was shown on the big screen showing his career and highlights. He seemed very touched by the standing ovation he received. Honoured many times over the years, including in Japan and as a honouree in the WWE Hall of Fame, Abdullah still has another goal — induction into the Pro Wrestling Hall of Fame in Amsterdam, New York. “The Wildman from the Sudan,” who reportedly gave his WWE Hall of Fame ring to his brother, believes that to be the highest show of respect from the business of wrestling: “As far as I’m concerned, there’s only one Hall of Fame, and it’s in Amsterdam.”

There were many greats present at the show, including former WWF champions Pat Patterson and Gino Brito, and Abdullah the Butcher’s old manager, Deepak Massand.