The book on Booker T ends too early

Make sure you read the subhead on the Booker T autobiography just so you know what you are getting. “Life Before the Squared Circle” it reads, and as amazing, interesting and well-written as Booker T: From Prison to Promise is, I still felt like the wrestling portion of his life should have been there.

Perhaps that’s unfair, but I was cheering within as Booker T. Huffman triumphed, finally, through a troubled childhood, escaping drugs and worse, ending up in prison, and then getting his act together with “real” jobs and becoming a true father to his son. 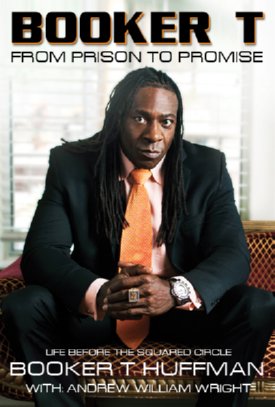 His wrestling career is only just three years old, having been primarily based in Texas, when he gets the call, along with his brother, Lash (Stevie Ray), to go to World Championship Wrestling in Atlanta where they become Harlem Heat.

Like a cliffhanger ending, that’s it, the book ends, the proverbial rug is been pulled out from under you.

And this is going to perhaps sound judgmental, but to me, Booker T isn’t a two biographies kind of star. Instead, it’s a little more indicative of the reach of cable television and his stardom in WCW and WWE, rather than his meaning to the history of professional wrestling.

Taking the side of the publisher for a moment, I can see the idea, though.

The first volume of his story, written with Andrew William Wright, is all about overcoming tragedy, poverty, drugs, greed and other horrible parts of society to finally stand up and be an honest contributor to society.It’s is a riveting redemption tale of an African-American who bucked the odds and survived, thrived, and became famous.

Booker T: From Prison to Promise is easier to sell to Oprah Winfrey this way, but it leaves the guaranteed market of the wrestling fan feeling sour, mixed in with admiration, respect and awe for all Booker T was able to accomplish.

So what do you get?

A glimpse into a entirely different life than anything I have ever known, for sure. His father died shortly after he was born, so Booker T. Huffman Jr. — “Junior” to his family — is raised by his mother, along with five brothers and sisters, until her accidental death, which still haunts Booker. From there, it’s a whirlwind, as he ping-pongs from relative to relative. “It was disappointing beyond comprehension to be in the midst of a systematic family desertion,” he writes.

The life of drugs and hustling overcome any attempts to stay in school and succeed in the band as a drummer.

It all leads to a series of robberies of Wendy’s restaurants around Houston, and his eventual arrest and incarceration. The reader is then let into the very scary world of the Texas penal system.

Through all these ups and mostly downs, we start to really understand the underlying strength of Booker T, what makes him the man that he is today. Refreshingly, he makes no excuses for his behaviour, just lays it out there.His descriptions of his involvements in various criminal activities over the years ultimately preview the similar rush that he no doubt gets from performing in front of an audience. “After all these years, chasing the adrenaline dragon was an organic part of my life,” he explains.

As much as it is a real page-turner, as I already lamented the story could have been told quicker, allowing for the wrestling side of his life to be further examined — even if it was just his days in WCW, and not the more recent WWE successes. As it is, we learn a little about his brother, Stevie Ray, who thought the brothers should give it a shot, their trainers Ivan Putski and Scott Casey, and a tiny bit about Texas names who were working the indy scene at that point, like Killer Tim Brooks, Tugboat Taylor, and Skandor Akbar.

There will be times where a shiver runs down your spine, reading how fine a line he walked and lived; you will weep along with him as he recounts how death has affected him, from his parents to a girlfriend who commits suicide; there will also be times when you share in his elation, such as when he is paroled, or when he does his first spinaroonie.

Booker T: From Prison to Promise is a wonderful book, but if you are only in it for the wrestling, perhaps it is best to wait for the next volume, when the publisher might even offer a package deal.