OTTAWA – Cancer is a disease that affects everyone. Whether it is high profile people like Lance Armstrong or your immediate family, cancer has disrupted everyone’s life at some point. For myself, it was losing a grandmother at the age of six. Perhaps that is why more than 350 wrestling fans gathered in Ottawa to honour the life of Phrank Morin. He was an Ottawa-based wrestler who passed away at the age of 23 due to cancer. 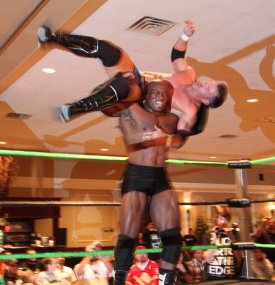 Bobby Lashley has Tyson Dux in a torture rack. Photos by Jason Barker.

Even though Phrank had a tragically short career in pro wrestling, he seemed to be well-liked by everyone who met him.

“Phrank was the nicest guy I knew,” said Player Uno of the Super Smash Brothers. “He was funny and charming. You couldn’t go anywhere with him without meeting someone he knew. Phrank was incredibly special and was the best friend a guy could have.”

Phrank’s passing left such a mark, his friends wanted to do something to honour his memory. It was decided the best way to celebrate his life would be to put on a wrestling show. The first Fighting Back: Wrestling with Cancer event was held on August 12, 2011. The event raised over $10,000 dollars for the Canadian Cancer Society.

There was never any doubt about holding Fighting Back II, which went down on August 17, 2012. With lessons learned from the first event, fundraising became a year-round effort.

“Fundraising wise, we did tons of stuff,” commented Mark Pollesel, owner of C4 Wrestling and key organizer of the Fighting Back shows. “During most C4 shows, we sold cupcakes as well as other sweet goods. Also, we had a table full of old WWF VHS tapes, assorted DVDs, and other things for donations.”

A few fundraising activities were quite unique.

“Mike Woods of Inter Species Wrestling organized a head shave which raised about a third of our total budget,” said Pollesel. “Before C4’s season finale in June, we held a fanfest with Inter Species and C*4 talents. We raised a great deal that way. Plus, we also did auctions that weekend.” 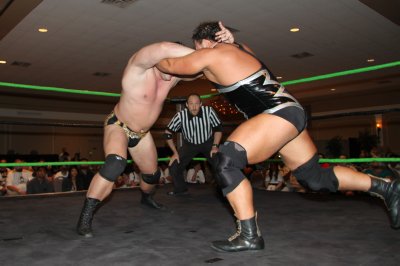 Besides contributing to a great cause, wrestling fans at Fighting Back II got to see a outstanding card. The opening match started with huge battle royal which seemed to feature every indy worker from Ontario and Quebec. Other highlights included an intergender match that highlighted the comedic stylings of Sexxy Eddy. Harry Smith and Michael Elgin put on a technical wrestling clinic that left many fans wondering why Smith is not still wrestling in the WWE and why Elgin, a standout in Ring of Honor, has not been offered a contract with the WWE. Bobby Lashley demonstrated pure power during his tag team match. The emotional highlight was Phrank Morin’s good friend, Player Uno, being inaugurated the Fighting Back champion after defeating “The Emperor” Stu Grayson and “Speedball” Mike Bailey.

Mark Pollesel credits the entire wrestling community for helping pull off Fighting Back II. “The event was the success of a community of people. Everybody volunteered their time to make it possible. My sister baked cupcakes, my fiancée and others’ significant others helped run the doors and auction tables. Fellow promoters helped push the show at their events. Workers went above and beyond simply wrestling on the show, they also helped push tickets. We did this as a community. We did it for Phrank and his family. We did it for other loved ones who passed from the disease. We did it to show our community could make a difference.”

They accomplished a pretty impressive goal, as the announcement from the website makes clear:

“And now what you have all come here for… It is all of us at Fighting Back’s pleasure to announce that we did indeed continue counting on Friday night. Every penny in the coin donation jar. Every bill from the cash box. Every generous donation to the CCS. Every nickle in couch cushions. We counted.