Samoa Joe often talks with his fists and feet rather than his mouth, but during a TNA conference call Wednesday, he spoke on behalf of all wrestling fans when he expressed his pleasure in the fact that this year’s Bound For Glory series “actually makes sense.”

The differences between last year’s Bound For Glory series and 2012 was the first question from the assembled media. 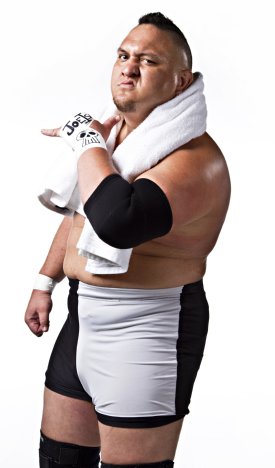 “I think the biggest difference in the tournament this year from last year is it actually makes sense this year. I have to hand it to the tournament organizers, they put together a hell of a tournament,” said Samoa Joe, who is one of the men still in the running for the TNA World title shot. “They kept the form and the function of the tournament very basic. I mean, last year, we had some ridiculous scenarios put together and pushed on the guys in the tournament. That led to me not really appreciating how things are run, maybe overreacting a bit.”

Like in 2011, the Bound For Glory series involves 12 men competing for the right to face the TNA World champion at the Bound For Glory pay-per-view. Wrestlers were given points based on their performances — a submission victory was 10 points, a pinfall victory 7, a countout victory 5, a disqualification victory 3 and a draw 2 points; a disqualification loss cost a wrestler 10 points. However in 2011, it became a bit of a mess as fans had trouble establishing who was winning.

“I really like the structure of the tournament this year. I think they’ve put some interesting caveats in there, with the submission versus the pinfall victory. I enjoy that advantage,” said Samoa Joe.

Ever confident, Joe sees the Bound For Glory series “as the prequel to my next championship run.”

But first he has to get past Jeff Hardy during tonight’s live Impact show.

“I’m squarely focused on trying to get as big of an advantage and getting as close as I can to getting back the TNA World Heavyweight championship. I mean, that’s my plan,” he said. “If I go out there and I beat Jeff Hardy, I’ve locked it up, I’ve sealed it up, I’m number one.”

Whoever finishes the Bound For Glory series with the most points during Thursday’s broadcast will earn the opportunity to select who they face in the semifinals at the No Surrender pay-per-view on Sunday.

Joe would not tip his hand though on who he might choose. Picking an opponent will be “purely reactionary” based on what condition people were in, he explained. “I wouldn’t tell you anyway. Where’s the fun in that?”

In the other Bound For Glory series match tonight, Rob Van Dam goes against Bully Ray.

The live broadcasts of Impact have helped the show, Samoa Joe said.

“Going live and working live, it’s a better atmosphere for television, and I think it delivers a better product,” he said, explaining that it is “absolutely” easier getting pumped up to wrestle live. “I think the better athletes and professional wrestlers of the world react better in a live environment.”

Despite his enthusiam, Samoa Joe can still see a few improvements for the Bound For Glory series for next year.

“I’d love to see more multi-matches in a night,” he confessed.

“I’d like to see more fan involvement with the bracketing,” he said, suggesting that fans could even pick some of the names in the tournament.