The road from Winnipeg to Mexico isn’t the most traveled one, but AJ Sanchez recently earned the right to make the trip. The 10-year veteran — who is only 26 years old — won a tryout with the Mexican lucha libre company AAA in the ‘Peg, hosted by Konnan, and is set to embark on a new adventure.

Sanchez will get two weeks of training, an article in a lucha libre magazine, and the chance to wrestle in Mexico City, Mexico. The tour is set for November 15-30. 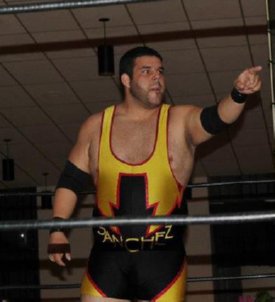 “It was all Danny Duggan’s idea to bring Konnan to Winnipeg and do the seminar,” Sanchez told SLAM! Wrestling about the August 22nd seminar. “It was held at a hall here in Winnipeg. I’ve always been interested in working anywhere and everywhere. Once I found out that AAA could become a very real option I was beyond excited.”

The tryout began with a seminar consisting of a few lucha-type drills Konnan had all the wrestlers perform to see where each one was physically. Konnan then gave the students of how Mexico is, including the culture, the wrestling shows, and the action in the ring.

“The seminar culminated in a four-on-four tag match in which Konnan wanted us to hit certain spots that you’d see in a typical lucha libre style match,” recalled Sanchez. “Prior to the match we were to enter as if we were entering the arena for our match, say our names out loud and work as if there were people there. I felt I excelled in the match being that I am outgoing as it is and just tried to make sure I stood out.”

Going into the tryout, Sanchez felt that wrestlers such as Mentallo and Danny Duggan would be his biggest competition due to their having wrestled internationally. However he felt he did well during the seminar in large part because despite his large size — 6’0″ and 271 pounds — he’s able to move around the ring like a smaller man. “There was a point in which I was well over 300 pounds, but could still move quickly, climb the ropes, be doing back flips. In recent months I’ve managed to drop about 50 pounds and gotten myself in to better shape. Hoping that is going to help in keeping up with the guys down there.”

Danny Duggan couldn’t be prouder of Sanchez’s accomplishments. “AJ has been a cornerstone of our company [Canadian Wrestling’s Elite] from the very first day; even becoming the first champion in company history,” Duggan said. “He has a list a mile long of memorable matches against the industries best formerly of WWE, TNA, in Ring of Honor, Japan, and the continents of top independent standouts. The world will now know what we have for years and that is AJ is a superstar waiting to be born!” 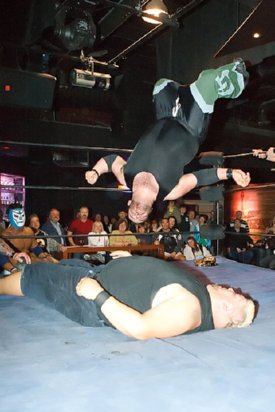 Winning the tryout meant a great deal to Sanchez and he hopes that it will lead to further work in Mexico. In trying to explain the determining factor in why he won, Sanchez felt it was likely due to the fact that he was more over the top and vocal in comparison to the other wrestlers. “Winning told me that I must be doing something right. I definitely do not consider myself to be the greatest wrestler out there, far from it, but at the very least it would seem I have an idea on how to stand out and garner some attention,” he theorized. “I’m proud of myself and ecstatic in the sense that I am going down and getting the chance to work and train with some of Mexico’s best, get to learn a new style but the ultimate goal is to be asked back.”

Perhaps one of the most important aspects of winning the tryout is the opportunity to have two weeks of training. “The AAA lucha libre style is very different from working here in North America. I got a small peak into how things are done in Mexico [from Konnan during the seminar]. How the work there differs from the work up here. Things to do and things not to do while working in an AAA ring.”

To mentally prepare for the two live events in Mexico City, Sanchez has been watching as many tapes and AAA video on the internet as possible. However, he is fairly confident due to how he handled a mishap during the try-out. “During one of the drills, as I attempted to jump up and do a leap frog, a piece of the ring actually came out and half the ring looked like there was a hole in it. I still managed to pull off the drill and the leap frog thankfully.”

Part of the reason for Sanchez’s confidence in his abilities is his having been the Premier Championship Wrestling (PCW) champion for over a year. “It was a fun time for me. It was at a time when wrestling was still being held weekly here in Winnipeg, so I was able to get a lot of work in. I got to work a lot with a guy named Antonio Scorpio Jr. while champion. They were always fun, hard hitting matches that I definitely enjoyed. Scorpio is a great guy, works hard and always gave me a good match.”

One of his memorable opponents during his time with PCW was TNA’s Chris Sabin. “Working with Sabin was a lot of fun. He was scheduled to be in a few months prior to work and there was some discrepancy and he couldn’t make it,” said Sanchez. “I then went on rants through YouTube and on the shows for months and finally he made his scheduled appearance as a surprise on the show after months of me calling him out. Crowd ate it up and the match was a ton of fun.” 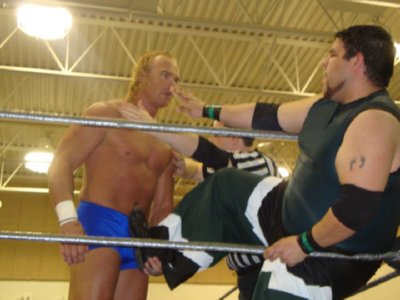 Sanchez also cites his partnership in the Big Sexy Beasts tag team with partner Kevy Chevy with helping to develop his professional wrestling career. “It was 2004 and we were both wrestling on shows together locally. We were both large men that were doing things guys half our size could not do. We became friends outside of wrestling and decided it would be a great idea to team up. We were sitting at a buddy’s, enjoying a few beverages, trying to think of names. I threw out ‘Big Sexy Freaks’; Chevy then changed ‘Freaks’ to ‘Beasts’ and it has stuck ever since. I think we’re successful because we are friends outside of wrestling and both are quite entertaining. Diverse in the fact that Chevy in the ring is a mean, ass kicker you wouldn’t want to mess with and myself I like to run my mouth, talk and am outgoing. It’s a good mixture. At present time I wrestle primarily for CWE (Canadian Wrestling’s Elite, www.cwecanada.ca) and have been with them since their inception in 2009. Chevy and myself actually re-united in October of last year and are currently the CWE Tag Team Champions after competing in a TLC match with a team called Team Impact (Robby Royce & Anderson Tyson Moore). It was the main event of the much talked about ‘Psycho’ Sid no show in Winnipeg this past April. That one was hell of a match.”

Chevy, the other half of the Big Sexy Beasts, can’t say enough complimentary things about his six-year tag team partner. “I have had the pleasure of wrestling with [Sanchez] in lots of matches all over Canada and the United States, and it has been fun, and he is an awesome friend,” raved Chevy. “He deserves his shot at lucha libre AAA. Hopefully he does well while he’s down there and they take a really good look at him. He’s a great wrestler and a great entertainer. Bar none, one of THE Best in Canada today.” 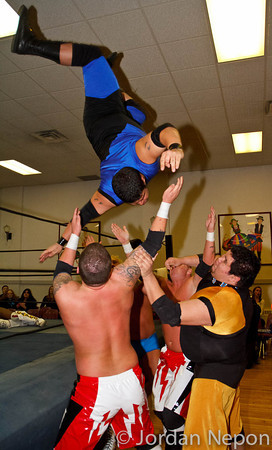 Sanchez flies from the ring.

Of course, as someone who has wrestled a great deal in the province of Manitoba, Sanchez is no stranger to the infamous road trips up to into the north in the dead of winter. “I have had the opportunity to travel and do shows as far north as Gillam (10 hours north of Winnipeg) as well as be on the road for the infamous ‘Northern Death Tours’ for Tony Condello. One story occurred on CWE’s inaugural tour up north in which former WWE/WCW/ECW star Big Vito put our rental van into the ditch two minutes after he had relieved me of driving. Having lost his gear through his travels to Winnipeg at the airport, all he had was his wrestling gear and the clothes he was wearing that day. As we’re in the ditch, Vito, feeling bad, grabs a shovel from one of the local people up there who stopped for us, and began trying to shovel out some snow from under the van. As he is bent over all you can see is a tanned bald man, wearing his Wrestlemania leather jacket, and his black thong sticking out. The look on the face of the man who stopped to help us was priceless!”

A promotion that Sanchez enjoys performing for to this day is Steeltown Pro Wrestling, which is run by the person who originally trained him, Rob Stardom. “I was there from the beginning in 2008 and have been working for him on and off since,” he said. A key cog in CWE because of his friendship with Danny Duggan, he often helps with the ring, lights, and whatever else needs doing at the CWE shows. “When I get the chance to work on an SPW show it is definitely a breath of fresh air. I don’t have to be that go to guy; I can just show up, wrestle and have a good time. Rob has a good group of guys, who are fun to work with.”

Multiple-time wrestling champion and author Vance Nevada was one person immediately struck by Sanchez’s initiative and take-charge attitude when he first met him at a training session for wrestling newcomers in 2003.

“When I had the opportunity to wrestle him in 2005, I thought for certain that this kid had the potential to achieve big things and I have been really pleased to see the success that he has achieved in western Canada. Without question, he is THE most under-rated wrestler in western Canada and it’s only a matter of time, should he be presented with the right opportunities at the right time, that he could be a major star for any company,” said Nevada. “I am thrilled to hear about his upcoming Mexico tour and hope that his stay there yields him the opportunities to elevate his career even further. As someone who has spent 19 years on the road working with talent at all levels, I can count on one hand the wrestlers with the ability and passion that Sanchez has for wrestling and am glad that this is someone that we will be passing the torch to in order to carry the wrestling industry forward.”

Like many professional wrestlers, Sanchez admits that one of his goals is to work for the WWE. “At this point I am feeling confident in my work, have begun to get into better shape and am just ready to go go go. Of course at present time WWE is looking for a guy with a certain look and while I’m getting there slowly, I’m not quite there yet. I’d love to be wrestling full-time anywhere; that is the ultimate goal. If that is any of the above mentioned places, I’d be more than happy.”