Yes! Raw GM A.J. is sure enjoying her role

Raw General Manager AJ Lee is really having a breakout year with the World Wrestling Entertainment. She’s been involved in a love triangle with two of WWE’s best in CM Punk and Daniel Bryan, she won the THQ Superstar Challenge, she will be portrayed in a Scooby-Doo movie, she will have her own character in the WWE 13 video game and most of all, she has been hand-picked by none other than Mr. McMahon to be the next Raw GM. On September 10th in Montreal, she will certainly have huge decisions to take, as this Raw edition will be the go-home show for the Night of the Champions PPV. After six long years since the last taping of Raw, the Montreal fans will surely expect a lot from the new sheriff in town. 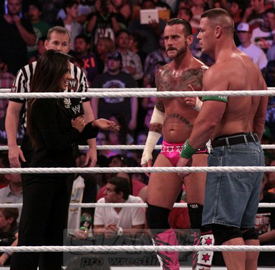 On last Monday’s Raw, AJ announced that John Cena would be facing CM Punk in Boston at the Night of the Champions PPV. Perhaps Montreal could get a sneak peak of what Night of the Champions will look like between these two. But another title could also be at stake at that PPV and it’s the Divas title, held by Layla.

Before she became that powerful woman, she was known to be the “Geek Goddess” and the “Crazy Chick.” But since the 1000th episode of Raw, on July 23rd, AJ Lee now wears power suits and has become an ever more important and influential woman within the WWE.

“Yeah, I mean, I think you have to grow up in the situation in which you are placed and with the responsibilities, you need to look the part. But I still wear bracelets and I don’t wear high heels, because that would be an injury waiting to happen! So it’s a little bit of both. I like to think that I can combine both worlds together,” AJ told SLAM! Wrestling.

The 25 year-old from New Jersey is really enjoying every minute of it. On top of having a new role, she will be a character for the first time in the next WWE 13 video game.

“Oh my gosh, yeah, I mean it’s so surreal to actually be a fan of video games and now watching myself in them,” she chuckled. “It’s cool to still be an active competitor in the video game world I guess and get to wear my power suits on TV. I don’t know it’s been a very good year, I’m so fortunate so many things on my pocket list kind of happen in one year and also with my action figure, it’s been pretty surreal and amazing. And now, with the role I’m having, I mean I love being general manager.”

Even though she wasn’t in WWE 12, she managed to win the THQ Superstar Challenge at the last WWE Wrestlemania’s Fan Axess, defeating in the final none other than “The World’s Strongest Man” Mark Henry. It was perhaps an even bigger Wrestlemania moment for her than the kiss-of-death she gave Daniel Bryan later that weekend.

“Hahahaha! I will always be able to say that I had a win over Mark Henry! That is real life! I have the trophy on my desk!” she crowed.

If this year’s Wrestlemania was an awesome one for her, next year’s in her own courtyard at the Meadowlands Met Life Stadium in New Jersey should be even better, or at least more special.

Would AJ preferred to be a wrestler on that show or the Raw GM?

“I’m so torn, I want this position to last long, it’s so much more fun and it’s amazing to have all that power and I’d like to stretch it as long as I can,” she said. “Being part of Wrestlemania is amazing to me. There’s a little 13-year-old inside of me that was a wrestling fan and the idea of wrestling at home, minutes away is so amazing. So if I was really selfish, I would do both, I would book myself in a match!”

Meanwhile, AJ will also have her character portrayed in a Scooby-Doo movie, a co-production between the WWE and Warner Bros.

“Oh my gosh, there’s definitely a checklist of amazing life experience milestone and being immortalize in a cartoon character is certainly bizarre,” she admitted. “We did the voiceovers and I hit on Scooby and Shaggy, so this is the most bizarre moment of my life! This is pretty cool!”

It has been a big summer for comic book movies, yet surprisingly AJ has not seen the most recent Batman movie, The Dark Knight Rises.

“Everyone keeps asking me that and it’s hilarious because I still haven’t,” she confessed. “This entire month I’ve been home for two days and I’m a weird introvert so it’s hard for me to go to the movies and it’s a popular movie so there’s a lot of people there. Being part of a big group is hard for me. So I’m gonna wait until it calms down or wait to watch it at home. Watching it on a plane would be the ideal scenario though.”

Pro wrestling, comic books and video games have been what AJ has been doing since she’s a teenager.

“I was the less coordinated person. I really had to force myself to become athletic, and wrestling was the only thing I wanted to do and I had to work really hard to get good at it,” explained AJ.

So instead of sports, she turned her attention to other interests.

“The very first video game I played was on Nintendo and it was Excitebike. I was really bad at it,” remembered Lee.

She also loves to read, especially pro wrestling biographies. “The first [of] Chris Jericho’s and Eddie Guerrero are my favourites,” she added. 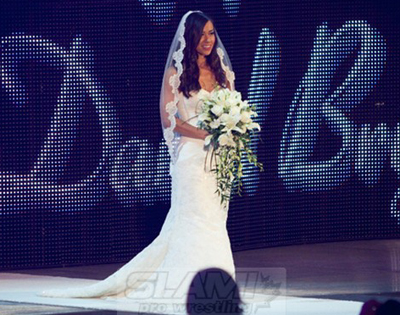 Twitter is also a big part of AJ’s life as she considered herself Twitter friendly. In fact, she is so Twitter friendly that during the SummerSlam weekend, since it was so hot in Los Angeles, she asked her followers on Twitter to “Yes” responsibly!

“Yeah it is, it’s a verb,” she laughed. “It was so hot out there and there were actually people passing out, and there were stretchers, we were out just for a couple minutes, and people were into the yes chants and I was like, just be careful. It’s a verb now. I’ve stolen the yes from Daniel Bryan and I made it into its own verb now!”

In Montreal on September 10th, she will need to tweet in French as well to be able to reach a maximum of fans.

“I learned French in high school but I forgot everything since. But I’m sure if I try hard I could put something in French in Montreal, but I will ask them to please forgive my terrible spelling,” answered AJ, who will visit Montreal for the very first time.

The fans in Montreal are known internationally to be rabid wrestling fans. With the first Raw tapings there in six years and being the last show before Night of the Champions PPV, one can except AJ Lee to play a huge role and to create a big reaction from those great fans that will be in attendance that night.

And if you really want to make sure that happens, there’s no other choice than to tune in Montreal, at the Bell Center on September 10th, same AJ-time, same AJ-place!