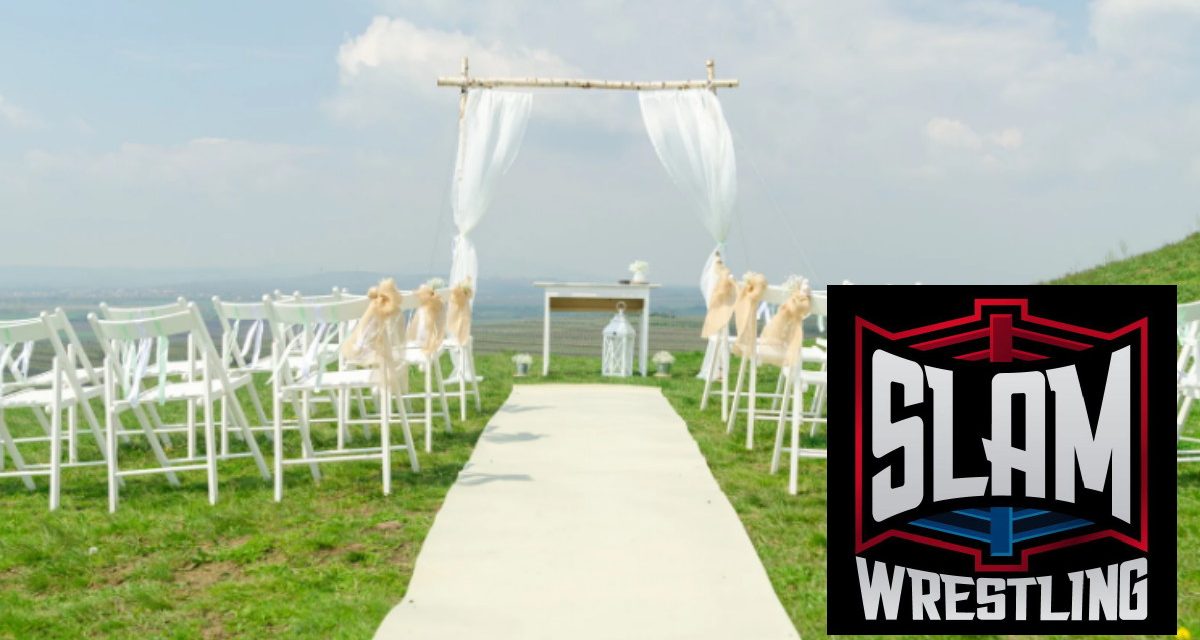 It’s wedding season! And the WWE is of course taking full advantage of this, as they are cordially inviting us to witness the exchange of nuptials between Daniel Bryan and AJ Lee on Monday’s historic 1000th episode of WWE Raw.

Despite the fact that wrestling weddings usually don’t end well, these segments have done huge numbers in the past. 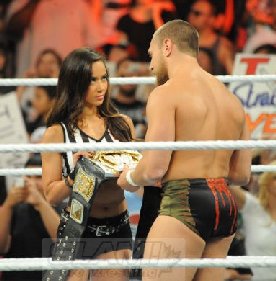 A.J. and Daniel Bryan share a special moment at the Money in the Bank PPV; Bryan proposed the next night on Raw. Photo by Mike Mastrandrea

Perhaps the most memorable weddings are the ones that have been the most elaborate. The farm animals used for Uncle Elmer’s wedding in the mid ‘80s can probably attest to that. However, it was the sound of Rowdy Roddy Piper’s bagpipes that drowned out the banjos, as Piper claimed that a wrestling ring was no place to hold a wedding. This was followed by several ruthless barbs by heel announcer Jesse Ventura, who ended up having his face planted in the wedding cake by the end of the night. But the newlyweds proved that neither the rod nor the bod could stand in the way of true love.

Incidentally, that wedding between Stan Frazier — Elmer’s real name — and Joyce Stazko was legit. That can’t be said about all wrestling weddings.

Like the odd wedding from the spring of ’99, when the Undertaker tried to force a very innocent Stephanie McMahon to take his hand in marriage. The only question is: was it actually a wedding? Or a funeral? Perhaps it could have been a little of both. Nevertheless, it was Stone Cold Steve Austin who ended up rescuing Stephanie from enduring an eternity of hell.

This was actually the first of three weddings that Stephanie would participate in that year. She was originally set to marry her long-time boyfriend Test, but the ceremony was cut short by Triple H, who revealed video footage of him having Stephanie drugged at her bachelorette party and then placed in the front seat of his car, which he then floored to Las Vegas for an express drive-through wedding. Eventually, Stephanie succumbed to The Game’s advances and thus, the McMahon-Helmsley era was born. Triple H and Stephanie were actually dating in real life and held a legitimate wedding in 2004. But prior to this, they decided to renew their storyline wedding vows in 2002. At this point, Triple H discovered that Stephanie lied to him about her storyline pregnancy, and he therefore destroyed his own wedding set, and broke his ties with the McMahon family with a pedigree to his father-in-law and WWE Chairman Vince McMahon.

The best weddings are often the ones where the love between the man and woman is more believable. And these are usually the ones between legitimate married couples.

While he wasn’t the first to get married in a ring, Johnny Barend, a veteran from upstate New York, had become a star in Hawaii and fell in love with a local. In 1967, Barend and Annie were married inside a wrestling ring, in front of 10,000 screaming fans. Naturally, Barend worked the show as well. 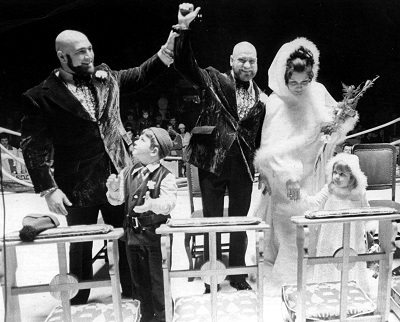 Jos Leduc lifts the arm of his partner, Paul Leduc, after Paul and Pierrette were married in the Montreal Forum in 1971. Photo courtesy Paul Leduc.

In 1971, Canadian great Paul LeDuc ended up taking a page out of Barend’s book by having his wedding in the ring to wife Pierrette.

But when talking about legitimate married couples, there is one pairing that stands above the rest: Randy Savage and Elizabeth. By the time Randy and Liz had their in-ring wedding at SummerSlam ‘91, they had already been married for seven years. Most fans will recall that both the proposal and the reception were much more eventful than the wedding itself, but it was one of the few WWE weddings that ran smoothly. The marriage didn’t last, but regardless, Savage and Elizabeth were always remembered and acknowledged as the first couple of the WWE.

Following the bizarre weddings of Stephanie McMahon in 1999, the WWE tried to take it up a notch by the turn of the century. There was the glorified same-sex marriage between Billy and Chuck in 2002, which they referred to as a partnership commitment. Later that year, was a somehow even more bizarre wedding between Dawn Marie and Al Wilson, which ended up with Al revealing his adult diaper to the audience and then suffering a storyline heart attack on their honeymoon. Then in 2004, there was another forced marriage between Kane and Lita.

One year later, Edge came between the latest married couple, and seemingly rescued Lita from the marriage that she never wanted to begin with. This led to yet another wedding between Edge and Lita, which Kane sabotaged, and then dotted the exclamation point with a Tombstone piledriver to the priest.

No one did weddings quite like the McMahons; here, it’s Stephanie’s wedding to Test, that was crashed by Triple H.

This was not the only wedding for Edge in his WWE career. Years later, he was scheduled to marry Vickie Guerrero, only to have Triple H to come out and rain on that parade, revealing footage of Edge having an affair with the wedding planner (current WWE Diva Alicia Fox).

Vickie was the Smackdown general manager at the time, replacing the previous general manager, Teddy Long, who was recovering from a storyline heart attack, which he suffered during his own wedding to Krystal Marshall the year before.

So if history is any indication, then Daniel Bryan and AJ are going to need several lucky charms for their wedding on Monday. Is it likely to be interrupted? You don’t need a wedding planner or a fortune teller to predict, Yes! Yes! Yes!