Tweets and knees of concern to Cody Rhodes 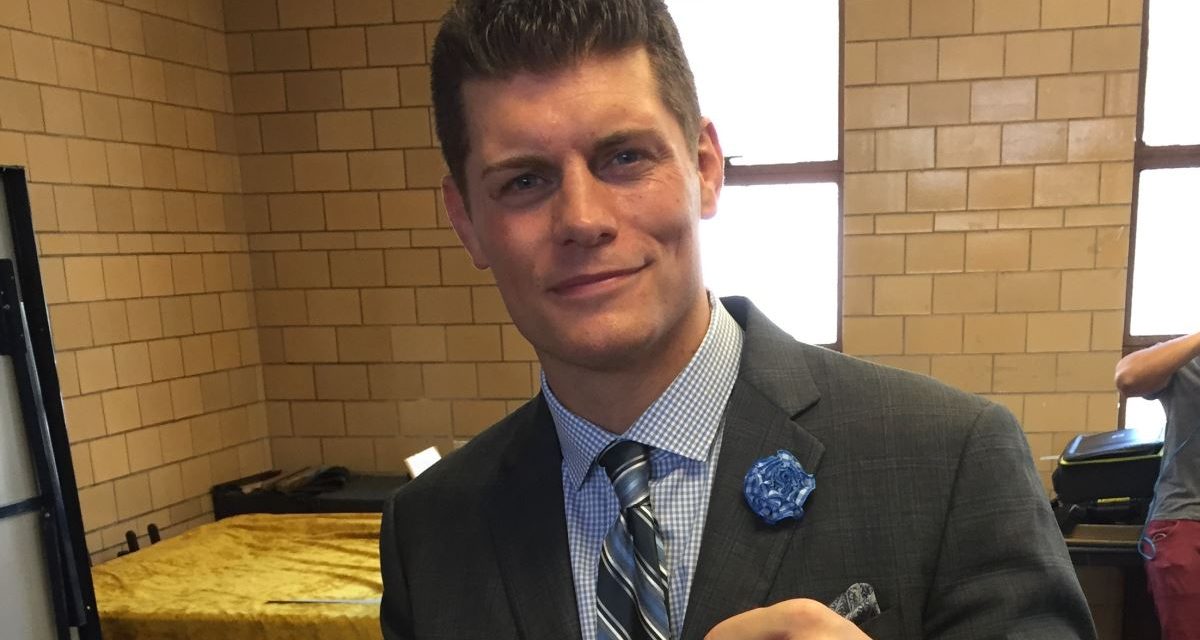 You know you are not dealing with your average WWE superstar when they drop names like “Nature Boy” Buddy Rogers and The Great Muta during conversation. Given his long association with the pro wrestling business through his father, it’s safe to say that Cody Rhodes is not your average WWE wrestler. 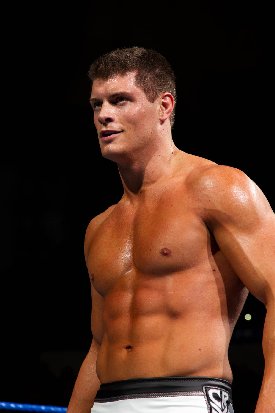 On his account — @CodyRhodesWWE — Rhodes has been making noises about dropping it altogether. “tweet 100 is most likely my last. Tried it, not my thing,” he wrote at the end of June.

Was he forced to have an account by the social media-obsessed WWE?

“The truth of it was is they hired these two hot girls, WWE did, to teach us about Twitter and I was the only one in the room that didn’t have one. I was kind of swept up in it all. No, by no means was it company mandated,” Rhodes said last week during an interview to promote the Money in the Bank pay-per-view. “I still say I certainly don’t understand it. I like my privacy, and that’s the biggest issue I have. Certain superstars that might not get that much exposure on WWE television, Twitter sometimes can reach out to ask many viewers as WWE Raw or Friday Night Smackdown can. It’s a very useful tool, and it’s one you have to be responsible with.”

Though officially a part of the Smackdown brand, the frequent “supershows” on Monday Night Raw have meant that Rhodes has gotten a lot more exposure recently on the “A” program for the company, and he expects that to continue with the three-hour Raws, which start with the 1,000th episode, airing July 23rd from St. Louis.

Some have argued that three hours of Raw every week may be too much. Rhodes warned not to judge too soon.

“I think that there’s a plan in place. We’ve highlighted it over the past few days, in terms of going Rawactive and the deal that WWE has engaged in with Tout, and obviously the deal we already have with Twitter,” he said. “I think that first hour is going to focus a lot on WWE Universe, on fan interaction, on what they want to see. And I think that will make it unlike any other three-hour wrestling show. That’s the different between when we shove the sports entertainment thing down people’s throats, that’s why, because we’re offering up such variety like that. I’m excited to see how it goes. It’s a gamble and typically in WWE gambles pay off.”

A few months back, it seemed that Rhodes was poised for a program with his half-brother, Goldust (Dustin Runnells), in WWE. But plans have a tendency to change, he said. That was a gamble the company didn’t want to take, and Goldust was released in early May.

“That thing seemed more like finalized in terms of the Internet, the vocal minority of fans that kind of pick apart and get inside,” Rhodes said. “The truth of it is it’s kind of day to day on Friday Night Smackdown as of now, so it wasn’t anything that I necessarily got excited about, but I would have loved to have done it.”

While promotional tours are easier than wrestling, they are still work, he stressed.

“I’ve only done one. Miz is like the master of the promotional tour, him and [John] Cena. It’s great for me, because people see me on the television and they assume I’m this egotistical, boastful, loud personality. In actuality, I’m pretty reserved. These media tours, they always get something they weren’t expecting. I like to hone my chops in terms of my interviews. Everything’s work for me, whether I’m getting banged up or not.”

A big comic book fan, Rhodes is behind in his reading, done mostly on his iPad. He is just finishing up the X-Men versus Avengers storyline. “My backpack wouldn’t be pleased with me if it was filled up with boarded and bagged comics,” Rhodes laughed. 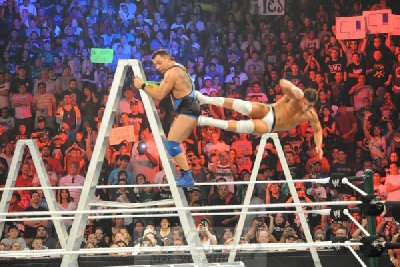 Cody Rhodes dropkicks Santino Marella during the Money in the Bank ladder match for the World championship contract on Sunday in Phoenix. Photo by Mike Mastrandrea

Rhodes’ addition of knee pads to his ring gear is both an acknowledgment that knees don’t last forever and that his legs aren’t that big.

When he finally saw himself on WWE TV, he recognized what WWE trainer Bill DeMott had told him: “There’s a little bit of concern that your legs aren’t that big.”

“I could see there was a little bit, my Buddy Rogers look, which is what I was going for, was not translating, it just looked like two, very nice female legs,” said Rhodes. “Eve told me once, ‘You have the best legs in the company for a girl.’ I thought that was awful, compliment backhanded.”

Convinced to try out knee pads, Rhodes debuted them at the Survivor Series.

“It happened to be a very pro-Cody Rhodes arena, so kind of just the vibe that was attached to that night, the kneepads and everything, I moved forward with it,” he said. “I don’t want to be like Great Muta years from now and not able to walk because I’ve done so many darn moonsaults. I’m sticking with them.”

Not many wrestlers throw out Buddy Rogers as a role model.

“I think you go back, the first WWWF champion, I just remember seeing a picture of him and his gear. His trunks were about a quarter of an inch higher, no kneepads, big chest. I just thought he was what a wrestler was supposed to look like,” said Rhodes.