Talking to a forgotten original host of Raw

Remember a guy named Rob Bartlett? Most of today’s wrestling fans probably don’t. But he definitely remembers them; especially the ones who sold out the old Manhattan Center for the premiere episode of WWE Raw on January 11, 1993. He was one of the original voices of the WWE’s flagship show.

“The Manhattan Center was a very intimate arena. It was like an old ballroom,” Bartlett told SLAM! Wrestling. “It was a very electric atmosphere and there wasn’t a bad seat in the house.” 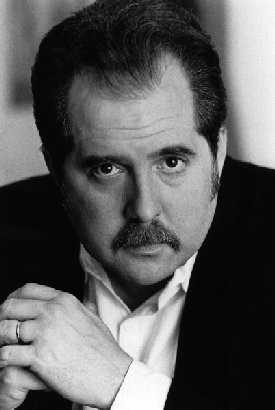 When Bartlett joined the company, he had a background in improv comedy and had no prior knowledge of pro wrestling. But his son Sean was a huge wrestling fan, so it was not an opportunity that he could pass up. To get there, Bartlett found himself in the right place at the right time.

“I was doing a charity event for the Connecticut Special Olympics, and Vince McMahon just happened to be in attendance, wearing this really peach-coloured suit,” Bartlett said. “So I made a couple of cracks about him and just started riffing on the suit, and everybody in attendance, including Vince himself, started laughing. So this is how our relationship kind of started and he invited me to come and announce this new live television show he was doing, Monday Night Raw.”

Bartlett joined Vince McMahon and Randy Savage for commentary during the first few months of Raw. It wasn’t a role that Bartlett was particularly familiar with, but McMahon had every confidence in him. And like every other risk that the WWE Chairman has taken over the last 19 years, he tried his best to make it work.

“I was nervous going into the first show, because I didn’t really know what I was going to do,” Bartlett said. “Vince had basically given me free reign.”

Although Bartlett was only with the company for 13 weeks, he certainly made sure that none of that time was wasted, as he would always come up with creative ways to draw attention to himself.

“I remember I came out dressed as Elvis one week, and the writers thought it was a good time to have Doink (the Clown) come out and hit me in the face with a pie, which kind of defeated the purpose of wearing the suit. And on another episode, I found myself in the middle of a cat fight between Sensational Sherri and Luna Vachon, and I basically got my own clothes torn off by the two of them,” Bartlett said. “There was one night in particular that really stood out to me. Vince (McMahon) couldn’t do the show, because he had to attend a charity event. So I went out and rented a tux and decided to dress up like Vince McMahon. And I had to really build myself up, because Vince is a big guy; he’s almost as big as the wrestlers. So I had the tux and I was wearing these football shoulder pads underneath, and I basically did the whole show as Vince McMahon. All the writers and everyone thought it was hilarious, because no one had ever made fun of Vince before.” 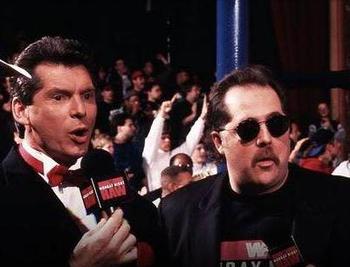 Despite the fact that Bartlett’s commentary was heavily criticized, he was still able to have a lot of fun and really enjoyed the people that he worked with. And it may have actually brought him closer to his son, so it’s not something that he will ever look down on.

“Randy (Savage) was the best. He was always so generous and very kind. Vince (McMahon) is one of the single greatest marketing geniuses I’ve ever met. There are very few people in show business who are as good as he is,” Bartlett said. “It was always great to see all these guys backstage, who had such loyalty to Vince.”

Bartlett was eventually replaced on commentary by Jerry Lawler.

Following his departure from the WWE, Bartlett returned to his roots as a radio and television personality. He is well known for his many impersonations of such news makers as Dr. Phil, Larry King, Bill Clinton, Hulk Hogan and Rush Limbaugh on Imus in the Morning. A TV show he wrote and starred in, Rob Bartlett’s Not For Profit T.V. Special, was nominated for five Emmys. He has also done many other appearances and occasionally goes back to his stand-up comedy roots.

Bartlett’s success in comedy propelled him to try his luck at acting. He became an accomplished stage actor and starred in many Broadway plays in the late ’90s, including More to Love, which he wrote. Bartlett recently made his return to Broadway and actually played two different characters in the production of How to Succeed in Business Without Really Trying.

He concluded that he will always looks back fondly at his days in the WWE.

“My wrestling knowledge was so limited, and after the first 13 weeks, I realized that it just wasn’t a good fit,” Bartlett said. “But I had a great experience and met some of the nicest and sweetest people. And I became my son’s hero.”