Back in 1993, the wrestling book industry wasn’t what it is today. In Quebec, even fewer wrestling books had been published than in the English-speaking world. Therefore, Fais-le Saigner was the first one to cover, in some ways, the history of pro wrestling in Quebec. 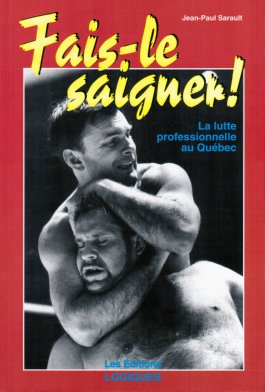 With no introduction and no foreword, Fais-le Saigner relates the careers of some of the most important wrestling personalities ever to be part of the Montreal territory.

The book is mainly a recollection of wrestling articles the author, the late Jean-Paul Sarault, had already written in the Journal de Montréal, the city’s biggest newspaper.

While these are among the best known wrestlers in the history of the province, Sarault also covers other wrestling personalities who might be less known to today’s fans.Great examples of this are the careers of Tony Lanza, who was not only a well-known photographer but also a former wrestler; Gerry Legault, a long-time promoter; Omer Marcheesault, known as one the best referees in Montreal; Michel Normandin, who was Montreal’s version of a Gordon Solie or a Jim Ross; and the Dufresne Brothers, who were mostly wrestling in the lightweight division.

That in particular is something very interesting. The lightweight division or as it was called in Montreal, “La p’tite lutte” — because their wrestlers were smaller than the ones one could see at the Forum — is not something the fans outside the province really knew about, but it was really popular here and the author talks about the details of this division.

Throughout these short biographies, the book also covers the more important eras in the history of Montreal wrestling.

The reader will learn more about promoter Eddie Quinn’s days, All-Star Wrestling with the Rougeaus, Grand Prix Wrestling, International Wrestling in the 1980s and even the WWF days, with a chapter on Hulk Hogan and the popularity of the WWF in that era.

Since the articles were mainly written from interviews, and given that it was a pre-internet 1993, the book is still a product of the kayfabe period to a degree, leading to some factual errors.

It doesn’t go deeply into each character or each period, but at the same time covers the basics.

Other stars who left their mark on the territory are also included, such as Abdullah the Butcher, Don Leo Jonathan, Yukon Eric, Gilles “The Fish” Poisson, Pierre Carl Ouellet and many others.

It also has a very interesting section on strongmen, as most of them also wrestled.The book, written in French, has 178 pages and has many pictures as well. For someone who doesn’t know too much about one the biggest territories in the history of wrestling, Fais-le Saigner book is a good way to start.

Unfortunately, it’s not sold in libraries anymore, but can be found on eBay, in the province of Quebec, or where used books are sold.

On a personal note, I had the chance to meet with Jean-Paul Sarault before his death on October 10, 2010, at the age of 79. The author and respected sports journalist, who among other things covered the Montreal Expos for many years, gave me his blessing to use anything I’d like from his book, for mine and Bertrand Hébert’s upcoming book on the history of Montreal wrestling, Mad Dogs, Midgets & Screw Jobs. Even if most of the information included in his book was already known to Bertrand and myself, Fais-le Saigner was important to us for another reason.

In Larry Moquin’s chapter, the author talks about Larry’s son and what he did for a living. I was then able to track him down, meet with him as well as Larry’s widow, and scan all of the Moquins’ personal archives, pictures and newspapers clippings.

I never had a chance to thank Jean-Paul Sarault for that and I will forever remember our two-hour chat we had about pro wrestling. Thank you Jean-Paul!