Gender is the obvious difference between a men’s wrestling promotion and a female one. However, it’s worth pointing out the difference in the fans as well. If you have a chance to go to one of SHIMMER Women Athletes DVD tapings, you will not only see some of the best female matches in the country, but you will see the most loyal and engaging fans around.

Twice in the last 12 months, I have had the chance to be there live, in Berwyn, Illinois, to see some of the best female wrestlers out there. But SHIMMER is not only about Cheerleader Melissa, Mercedes Martinez, Hailey Hatred, Sara Del Rey or the many Joshis, it’s about 250 fans live in attendance and the many others following the promotion throughout the world. 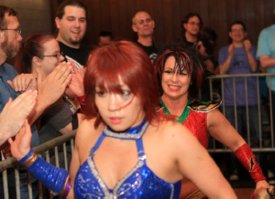 Kana and LuFisto head to the ring, meeting ringside fans along the way, at the most recent SHIMMER taping in Berwyn, Illinois. Photo by Eric Salottolo

“SHIMMER fans are probably the most loyal fans out there,” said longtime SHIMMER wrestler LuFisto. “Also, to show support to the girls, they will go around the merchandise table and buy as much stuff as they can.”

She couldn’t be more right. In between shows, all the wrestlers were selling their merchandise — and selling a lot. T-shirts, DVDs, pictures, bracelets, the whole nine yards. If a wrestler has a new T-shirt or a new picture, you can be sure she’s going to sell a bunch.

But it doesn’t end there.

After both days of tapings, the fans are welcomed to an after-party at a restaurant near the venue to meet with their favourite wrestlers. It’s a mandatory requirement to attend for all of the SHIMMER roster.

And only then you can really appreciate the difference.

“The after-party was (SHIMMER co-founder Dave) Prazak’s idea. It is a great way to promote SHIMMER while cross-promoting another business in Chicago and bringing everyone together after a long day of wrestling. It builds camaraderie amongst the roster, allows the fans to meet their favourite wrestlers in a more relaxed environment and also gives fans a chance to bond with one another,” said SHIMMER co-founder Allison Danger.

During those after-parties, not only are the fans respectful when asking for a picture or an autograph, but they also bring the wrestlers gifts. Some of them are bringing drawings they made; others will give them pictures they took; a few will even pay for a drink or a meal, in the same kind of way a sponsor would do.

But why are they so into SHIMMER and women’s wrestling?

“Because if they don’t, they are going to continue to be force fed the wrestling that is on TV,” said Danger. “By supporting SHIMMER, fans are making an alternative to WWE and TNA programming readily available. Fans have power and that power is money and viewership. By supporting companies like SHIMMER, Canada’s Femmes Fatales, England’s WAWW, various Joshi promotions and more they are telling bigger companies what they really want to see is women booked in serious matches and in storylines that are not below them.”

SHIMMER isn’t the only women’s promotion to have a really strong fan base like this.

“I see the same kind of devotion for all-female promotions whether it is Femmes Fatales, Pro Wrestling Eve or WSU,” explained the 15-year veteran LuFisto. “I’ve seen the same kind of respect and devotion while travelling in Japan and Mexico … SHIMMER fans will show up at our shows, flying or driving long hours and they will buy our DVDs and merchandise.”

The fans are traveling the world to be part of that experience.

“I have met fans from Ireland, France, Japan and Germany at SHIMMER shows and I am sure more places but exactly where I am unsure,” said Danger. “We do have Chicago-based fans but I think the vast majority bring themselves in from out of state.”

“Unlike other promotions, which are more regional-based, be it to countries or areas, SHIMMER will book talent from anywhere in the world, creating matches which would be impossible anywhere else,” said long-time fan Lee Burton of England, who is willing to travel thousand of miles to the SHIMMER shows. “With so much talent under one roof at one time, it means there is amazing potential for any number of great matches, as has been demonstrated over the last six and a half years.” 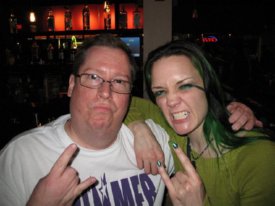 “The after-party and the easy access to the wrestlers are a welcome bonus,” said Stewart Allen, another long-time English fan who created the Ringbelles.com website with Lee Burton after their first SHIMMER encounters. “The wrestlers don’t need to make themselves available like they do, but they mix easily with the fans, signing autographs for and posing with fans, and later in the evening, dancing, drinking and singing together. It creates an almost family type of feel — and when I travel to SHIMMER, a big part of me is looking forward to meeting non-wrestling friends that I’ve made over the years too.”

“SHIMMER is a community. The wrestlers have their own, the fans have another, and then the two interact. It is a lovely atmosphere to be part of,” added Burton.

Even if you’re a newcomer, there’s a strong possibility these fans already know who you are.

“It’s an incredible feeling. Before I wrestled my first match, I got a big reaction just with my entrance, as if they knew me for a long time,” said Femmes Fatales’ champion Kalamity, after her debut with SHIMMER in October 2011. “Everyone seemed to know who I was and were asking for pictures and giving me presents. I had never witnessed something like this before.”

Not only these fans providing financial support by buying merchandise, but this support goes beyond the green dollars.

“It is a total confidence boost. You feel that need of giving everything you got. I’m just happy when I perform at SHIMMER. Meeting them is always a blast. When you are part of SHIMMER, it just feels like what you are doing matters,” said LuFisto.

SHIMMER brings the best female wrestlers they can. Many Divas and many Knockouts have been wrestling for SHIMMER since its creation in 2005. But it wouldn’t be what it is today without these great fans and this superb idea of creating a special bound between them and the wrestlers they love to watch.

Again, LuFisto has probably the best way to describe this relation.

“To them, we are athletes.”

NOTE: Tickets have just gone on sale for the SHIMMER tapings on October 27th & 28th, 2012. As per usual, front row tickets are already sold out, but other tickets remain.