Dillon’s Being a Horseman DVD held back by gimmicks

The approach taken with Being a Horseman starring J.J. Dillon is very different from other professional wrestling documentaries. The best way to explain it is probably how J.J. Dillon himself describes a typical Jim Crockett Promotions wrestling card, which is that you slowly build up to the main event. The idea is you keep the interest of the viewer by enticing them with tantalizing bits of information to keep their attention until you get to the parts that they bought their ticket to see the show for.

Unfortunately, this does make for some stretches during the first third of the DVD where most of what you’re being relayed is what time the Four Horsemen left by car, arrived at the arena, performed in the ring, and then got to the hotel. It isn’t until the second third of the DVD that J.J. Dillon truly gets the opportunity to open up with some stories about the Horsemen and even then, there are points where the interviewer on the DVD stifles him. 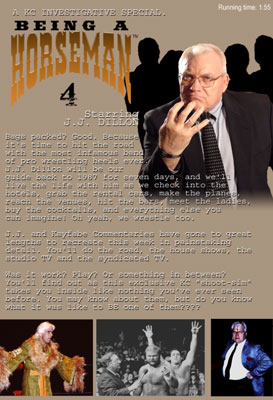 Despite those issues, Dillon still manages to get out a great deal of information about life as a Four Horseman including what it was like to go out after the show with his fellow members, how each wrestler prepared prior to a performance in the ring, and his own role as not only a manager of the Four Horseman, but also as someone who was a member of the office. It is in the area of office responsibilities where some really interesting information comes out about how he helped to assuage issues between Dusty Rhodes, and Ric Flair and the Horsemen.

The week that Kayfabe Commentaries chose to cover for this DVD was the last week of February 1987, which is right around an important period for the Horsemen when Ole Anderson was kicked out of the group and replaced by Lex Luger. In the last third of the DVD, Dillon talks in some detail about how the choice of Luger came about and how the turn from heel to babyface happened with Ole Anderson.

Remarkable stories came out when Dillon talked about what was involved with the television production. It was fascinating to learn that many of the great promos that the Horsemen did were typically taped pretty early in the morning and how those promos were constructed via ad-libbing and building on what each of them said. There was also an insightful explanation provided with respect to why the Horsemen were able to continue to be enduring heels despite going through periods where the babyfaces were always winning.

There were some elements of the video production with this Kayfabe Commentaries DVD that I found detracted from the interview with Dillon. For example, when the interviewer would ask a question about what the Four Horsemen were like in the locker room, a small image would pop up on the bottom of the screen and canned sound of people talking in a locker room would play. Similar things like this happened throughout the DVD when the interviewer asked about performing in the ring, travelling, checking into the hotel, and various other items. The small images were not that much of an issue, but the canned sounds would at times drown out what Dillon was saying and really didn’t seem to add anything to the DVD beyond being an annoyance.

There was also an unusual tendency where every time J.J. indicated he had to pay for something, the sound of a cash register would ring out and a dollar amount showing the cost would appear in the bottom portion of the screen. This would have been fine, if Kayfabe Commentaries had provided at the end of the DVD a total of the weekly costs along with what the weekly pay was, because it would have given the viewer a better idea of what the financial life was like of being a Four Horseman and how close or far away they were living paycheque to paycheque.

The extras on the DVD include further interview portions with J.J. Dillon, including a rather enthralling one on the infamous Horsemen attack on Dusty Rhodes. In this particular extra Dillon explains how the germ of the idea for the attack came about, how they explained from a storyline perspective a television camera was present for the attack, and some other behind the scene’s information. There is also a humorous story about an incident in Australia and a couple of other stories.

Being a Horseman starring Dillon has some segments that are truly astute and captivating, but some of the distracting production elements, and the tendency by the interviewer to suppress some of Dillon’s responses, results in a good DVD that should have been a great DVD.