Guest column: John Cena, fascist without a cause

By DOUG WILLCOCKS – For SLAM! Wrestling

As Living Colour reminds us every time CM Punk enters the fray, “Like Mussolini and Kennedy / [Wrestling’s a] cult of personality.” Faces and heels don’t rationally debate the comparative merits of their worldviews, they battle over charismatic authority. And, much to the continued chagrin of Punk’s army of the voiceless, John Cena remains the new millennium’s reigning authority. Unfortunate for many reasons — primary among them, while his predecessor Hulk Hogan was more Kennedy, Cena’s more Mussolini.

Wrestling went mainstream in the 1980s at the cultural zenith of the Cold War. Decades of heightening nuclear tension between Western democratic capitalism and Soviet state socialism had reduced the political complexity of the dispute to a fateful clash between Good and Evil. 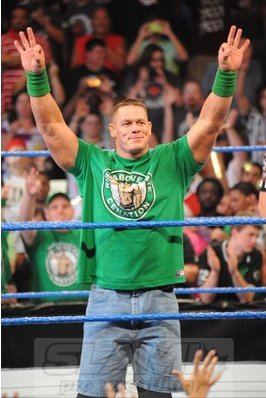 John Cena, fascist without a cause? Photo by Mike Mastrandrea

With undeniable charisma, Hogan quelled any doubt that North America’s material ascendancy since World War II was the justified outcome of its moral superiority. Might — not reason — made right, the very crux of fascism. Like JFK’s prodigal popularity, Hulkamania let people put aside their moral uncertainties and believe whole-heartedly in the fair virtue of democratic capitalism and its red, white, and blue saviour. As Gorilla Monsoon elegantly summed up Hogan’s famous victory over the corrupted Andre the Giant at WrestleMania III, “He’s thanking the big guy upstairs, as he always does … thanks the man upstairs who makes it all possible, and Hogan fulfills that dream by keeping it all together.”

Fittingly, when Hogan epically turned heel, he did so by selling out his morality to form the nWo. In cultural parody of global politics, wrestling’s New World Order took their namesake from Papa Bush’s favourite post-Cold War catchphrase for a world security (some read ‘police’) state where superpowers ultimately maintained prominence by potential force alone, freed from the awkward condition of defending a moral system through nuclear fallout. Like the visible culmination of conspiracy theory fears of a secret Bush-Gorbachev alliance, Hall and Nash from “up North” joined Hogan “down South” in a nihilistic faction seeking the annihilation of professional wrestling’s moral order. Appealing to both the children of the ’80s turned angry teenagers and its adult audience coping amid a swirling sea of moral relativity after the fall of the Berlin Wall, wrestling enjoyed another boom period in the late 1990s. Fuelling Stone Cold middle fingers and DX crotch chops, the nWo’s mission was at least successful in inverting the moral order.

Out of the white-hot ashes of the Attitude Era of the anti-hero, the first generation of mainstream wrestling fans found themselves burnt out on the product and submitting to the dispassionate apathy of early adulthood, so WWE sought their children by recalibrating its morality play. However, from his SmackDown debut on June 27, 2002, to his 10-year anniversary, John Cena seems a pitiable replacement for Hogan’s moral guarantor. 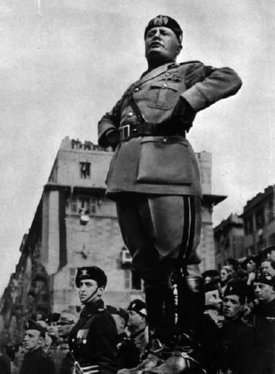 Word is that Mussolini taught Cena the STF.

His disappointing run as millennial superhero demonstrates the untenable premise of Cena’s act. America’s post-9/11 wars on Iraq and Terrorism patently resisted framing as proving grounds between ideological systems. Rather, the decade tested not America’s moral superiority, but its cultural tolerance, punishing only extremism.

Wrestling reflects this delicate moral balance, with Cena its figurehead chameleon ready to take whichever side of the Republican/Democrat divide serves storyline purposes, one week the Dionysian ‘Rated-R’ Edge’s conservative foil and a reunited D-Generation X’s liberal consort the next, or, at WrestleMania XXVII, appealing to Atlanta’s assumed Southern gospel values with an extended prayer only to blithely drop any and all evangelizing in return to his eponymous dog tags and phony military salute the next night on Raw.

Cena’s moral grounding is as empty and obtuse as his catchphrases “Hustle-Loyalty-Respect” and “Rise Above Hate,” freeing him to situationally enact any moral position regardless of self-contradiction.

Wrestling’s new children may believe in him, and its long-suffering remaining adult fans may want to believe again, but his might does not confirm right, only Cena’s might itself. Originated as the poster boy of “Ruthless Aggression,” Cena’s fascistic circling has oscillated so frequently that it has completely detached from its moral bearings.

There are catalogues of troubling propaganda photos of a young Benito Mussolini skiing topless and posing beside gymnasium equipment, muscles primed and gleaming. While the comparison is crude and outrageous if not crass and careless — of course neither John Cena the person nor the wrestling character is in any way sympathetic to a genocidal totalitarian — a pivotal aspect of the muscular culture that abetted 20th century state fascism was its separation of charismatic authority from morality through this very process of might proving might, unencumbered by right. Encouragingly, a large portion of the wrestling audience continues to reject this amoral cultural shift. So go ahead, as long as he remains an unrepentant amoral fascist, chant “Cena Sucks” with pride.

A lifelong fan, Doug Willcocks wrestled with professional wrestling through a sociological lens during an MA degree at the University of Toronto and a Graduate Research Fellowship at the University of Victoria, and continues to be intrigued. If you like his musings, perhaps check out his chapter, “Wrestling with Canadian Masculinities: Contesting Hegemony within WWE’s Masculinities Matrix,” in the forthcoming (November, 2012) CSPI/Women’s Press book Canadian Men and Masculinities: Historical and Contemporary Perspectives.