The LAW unbroken after 15 years

He’s talking about TNA Wrestling, which never fails to get him riled up.

“You know what really bothers me?” Lovranski asks in the booming voice that has rightfully earned him his nickname, The Mouth. 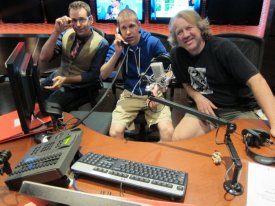 Jason Agnew, John Pollock and Dan “The Mouth” Lovranski in the studio taping The LAW. Photos by Colin Hunter.

Co-host Jason Agnew smirks and chimes in: “A lot, apparently!”

A few metres across the studio, manning the phone lines and listening to his cohorts on a pair of headphones, John Pollock inadvertently laughs into his microphone.

For loyal listeners of Live Audio Wrestling — The LAW, to those in-the-know — it’s a comfortingly familiar scenario. Lovranski is ranting about TNA, Agnew is interjecting with witty rejoinders, and Pollock remains the even-keeled producer trying to maintain some semblance of order.

On hold, several callers from all around North America await their turn to join the fun.

Every week for the past 15 years, wrestling fans have tuned in to The LAW for news, interviews and often-heated discussions about the merits and many shortcomings of the strange carnival known as professional wrestling.

Although the show has had a rather nomadic existence — bouncing between a half-dozen radio stations since its inception and enduring a brief homeless period as a podcast — it has always drawn a strong and devoted listenership.

Now broadcast on Toronto-based TSN Radio, and available all over the world thanks to streaming on the TSN website, The LAW is showing no signs of radio ring rust, so to speak.

The LAW empire has expanded to include a series of podcasts on Fight Network Radio — shows like Review-a-Raw and Review-an-Impact and others — as well as a vibrant social media community and a message board that buzzes with activity during broadcasts and throughout the week. 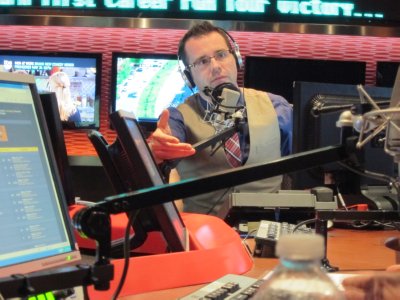 With their 15th anniversary episode airing May 27, Lovranski, Agnew and Pollock are reflecting on hundreds of past episodes, and are justifiably proud of their reputation as the reigning champions of wrestling radio.

Even as Lovranski launches into another booming tirade about TNA’s new “Gut Check” feature, it’s clear that, no matter what, he truly loves wrestling. And talking about wrestling.

“It’s pretty awesome that I now make some money talking about the thing I’ve loved since I was a little kid,” says Lovranski, who remembers accompanying his grandfather to the Simcoe arena to watch the likes of Andre the Giant and The Sheik.

Of the three current LAW hosts, Lovranski has been at it the longest, joining the program as a producer in 1998, shortly after it switched from an internet-only show (on the Virtually Canadian network) to a radio program on The Fan 590.

Though he had many years of campus radio experience under his belt, Lovranski says he got the job largely thanks to the Cactus Jack t-shirt he wore to the interview, and the fact that he owned a VHS tape of ECW’s infamously gory “Mass Transit Incident.”

Live Audio Wrestling had been launched several years prior by co-hosts “Gentleman” Jeff Marek and “Big Daddy” Donnie Abreu, along with Ontario indy wrestler Chris “Notorious T.I.D.” Tidwell. Trish Stratus even co-hosted the show for a stretch in 1999 when she was on the brink of breakout stardom in WWE.

Marek stayed with the show longest of the original hosts, eventually leaving to work in a variety of sports broadcast positions (including his current job with Rogers Sportsnet, a competitor to TSN, which makes it unlikely he’ll be able to join his former comrades on the 15th anniversary broadcast).

Shortly after Lovranski joined, Agnew took on the role of producer with the show. Fresh out of Ryerson University’s Radio and Television program, Agnew knew he could enhance the production values of The LAW. It helped, of course, that he too was a wrestling fanatic with the gift of gab.

Though Lovranski is the “mouth” of The Law, Agnew is most at home on the microphone (or in front of the camera, as host of TV programs including The Conventioneers and roaming quiz show Door to Door). In wrestling parlance, Lovranski is the Jesse Ventura to Agnew’s Gorilla Monsoon. 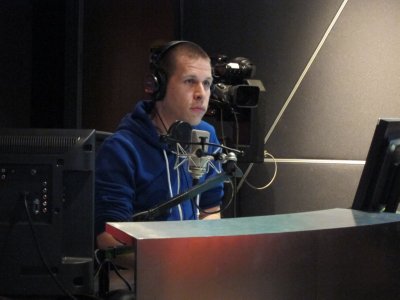 Pollock, who signed on in the summer of 2003, could be described as the team’s equivalent of Jim Ross — highly knowledgeable and unflappable (minus the Stetson and drawl).

Among Pollock’s chief responsibilities is to juggle the many callers — an all-male cast of characters — who phone in during every broadcast, sometimes in rapid-fire succession.

Like any call-in chat show, The LAW has a crew of regular callers, some of whom have become recognizable personalities in their own rights.

On this particular evening, most of the usual suspects phone in. Steve from Bradford checks in shortly after midnight to chat about a recent MMA card (The LAW always contains some MMA banter, though the focus remains on pro wrestling).

Ronnie from Houston chimes in at 12:24 a.m. to apologize for swearing on the air last time he phoned (a definite no-no on TSN), but then confesses he has been drinking all day and proceeds to make a barely intelligible dick joke. Agnew hangs up — something he seems to take pleasure in doing to off-topic callers.

Then there’s John from Arkansas — or “John of Ark,” as he has come to be known. His weekly call is always anticipated, often dreaded. John of Ark’s opinions rarely seem to jive with the hosts’, frequently resulting in some of the show’s more amusing verbal fireworks.

“John of Ark reminds me of a crazy version of Jim Cornette — and Jim Cornette is already pretty crazy to begin with,” Agnew says.

While all three hosts have been known to get a tad combative at times, Agnew in particular is has what he proudly calls “the shortest fuse.” He has heard that some people are afraid to phone in, lest they suffer the Wrath of Agnew, but he insists his barbs are all part of the fun.

“Wrestling fans are loyal and passionate, and I love that about our fans,” Agnew confides. “But seriously, if you’re going to call the show, have a goddamned point and make it.”

Lovranski adds: “If we get worked up, that’s just us doing our job — to argue and talk.”

Although most of the regular callers are just enthusiastic wrestling fans, one weekly caller is something more: legendary wrestling journalist Dave Meltzer. Both admired and decried for his Wrestling Observer newsletter — a so-called “dirtsheet” that divulged backstage secrets during the bygone era of kayfabe — Meltzer is now regarded as one of professional wrestling’s most knowledgeable pundits.

Every week, Meltzer phones in from his home in San Jose — or from wherever he has flown to cover a wrestling or MMA event — and dissects the topics of the day with the LAW guys.

“Having Meltzer on the show gives us even more credibility,” says Agnew. “He brings different perspectives and he’s got so many contacts in the business.”

As the clock above the production booth ticks closer to the show’s 1 a.m. wrap, Agnew quizzes a pair of callers in the weekly segment called Title Bout Trivia. Agnew, who has hosted several game shows in his broadcast career, rewards the winner with free wrestling tickets (and, as a matter of custom, gently mocks the loser). 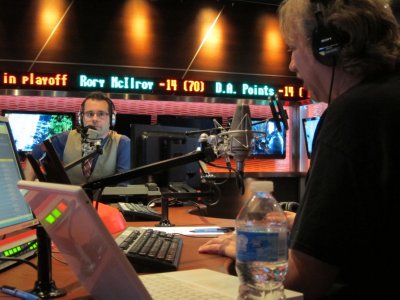 A few more callers join the fray before the show goes off the air at the stroke of 1 o’clock. Lovranski, as always, signs off with his impression of Hulk Hogan’s signature growl, “Brrrrrother!”

The “on air” sign above the production booth blinks off, and another episode of Live Audio Wrestling is in the books (and soon to be posted to iTunes for those listeners unwilling to stay up until 1 a.m. on a Sunday).

After nearly 15 years of gabbing about wrestling, the hosts of Live Audio Wrestling are showing no signs of slowing down.

“Hosting this show is the high point of my week,” says Pollock.

Lovranski, unsurprisingly, chimes in to get the last word:

“There is always, always something worth talking about in wrestling, whether good or bad,” he says. “Always.”

Colin Hunter insists this story is true, unlike any of the stories on his satirical wrestling news site, www.kayfabenews.com.