With respect to Maria Kanellis, there’s good news and bad news for Toronto fans. The good news is that she can be seen weekly on the Ring of Honor TV show. The bad news is that she won’t be along with her boyfriend Mike Bennett this Saturday for Ring of Honor’s Border Wars show. Regardless, Maria can still talk a good game, as she reminded this SLAM! Wrestling reporter recently during an exclusive sit-down interview, her boyfriend can beat you up. 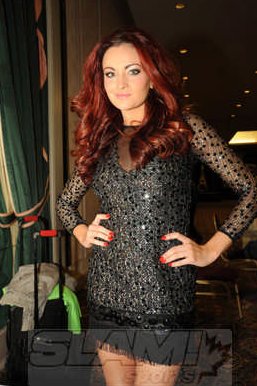 Maria poses for the SLAM! Wrestling camera at WrestleReunion in Toronto in April 2012. Photo by Mike Mastrandrea

That’s undoubtedly true, but the real question is whether “Prodigy” Mike Bennett, the aforementioned boyfriend, can also beat up Lance Storm, his opponent at the show at the Ted Reeve Arena, which will also be airing as an iPPV. For her part, Maria will do whatever she can to make sure that happens. Being out there with her man, she said, is why she’s with RoH in the first place.

“I started with Ring of Honor last December,” she explained. “They asked me to do a show at the Hammerstein Ballroom, and I had an amazing time. I had been dating Mike Bennett for a little while, but it was kind of on the hush-hush for the first six months because we wanted to see where it was going to go. But after that show, we decided to work together.”

Since then, Maria has not looked back on the decision with any regret. In fact, her time in RoH has given her some opportunities to do things and learn things that she didn’t get to do as much as she would have liked while in WWE.

“What I’m doing now is a lot different than what I was doing in WWE. It’s a lot of what I wanted to do as a bad guy. I get to have (more) input (into what I do). My confidence in wrestling has grown ten-fold in my time in Ring of Honor,” she continued. “It’s grown more in that time than in all my time in WWE. Because I can ask questions, I can say, ‘Well what about this?’ or ‘How does this go?’. And I don’t feel like I can lose my job for it. They might look at me like I’m a little crazy, but I can ask whatever I want, and I never feel like I’m asking the wrong question.”

Of course, there is also the benefit of getting to work with her boyfriend, which is something she really treasures.

“We’ve been working with each other since December of last year. That’s a lot longer than I’ve been able to work with most people — storylines in WWE were three months tops.”

While for some couples, spending so much time together might not be as desirable in actuality as it sounds, Maria is nothing but positive about the arrangement.

“We’re each other’s favourite person to travel with because we’re so similar. We eat the same things, we like to go to the same places, we even drink the same tea. It’s insane how much we like to travel together. Also, he evens me out. I’m a lot more crazy than he is. He’s a very calm man, and I’m a wild child. I love to do a hundred million things, and he loves to do one thing and that’s wrestling.”

While “a hundred million” is obviously an exaggeration, Maria does have a number of projects on the go, though for various reasons, she’s not at liberty to discuss many of them in detail.

“I did a sword-fighting production that we’re waiting to see what’s happening with that. There are a couple of reality shows that I’m a co-creator of, but that I can’t say anything about. There is a show that I’m involved in that will really affect the state of wrestling, but again I can’t talk about it. What I can say is that it doesn’t end for me, with wrestling or the entertainment industry. I used to think that when you turned 30 or 35, then that was it. But now I’m moving backstage, and getting into the position of creating, so for me it doesn’t end.” 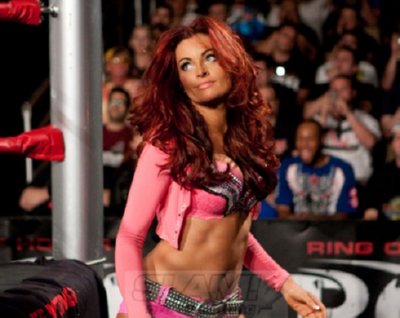 Maria struts around ringside in Fort Lauderdale during the Ring of Honor shows WrestleMania weekend. Photo by The Masked SLAM! Wrestling Photographer

Of course, her main interest right now is Ring of Honor, and how she can help that company continue to grow and succeed. Kanellis is in a unique position in that she is a woman in a male-dominated industry, she isn’t a primary in-ring performer in a company where in-ring product is the main focus, and at only 30 years old, has more industry experience and name recognition than most of, if not all of, the rest of the roster. So she does what she can to help out where possible.

“Some of the guys do come up to me and ask my advice,” she agreed. “Some of them want to know how to do things better for TV. There’s a certain way to perform for TV and a certain way to perform for house shows — for example, when you’re a bad guy, you want to make sure that people watching at home know that you’re a bad guy — there’s a way to do that. And some of them ask me things because I have been in WWE, and that’s where they want to go. And I learn things from them when I can — I’m very curious, I’m always asking questions. So it’s a give and take.”

And what are some of her specific ideas on how to build Ring of Honor?

“Well,” she thought, “there’s not a women’s division there yet, so I’d love for more girls to join the company. At the same time, we just got the deal with Sinclair Broadcasting, and we already had a lot of talent, so a priority is building those guys up. The girls will come, but the focus is to showcase the boys right now.”

“And I want Mike to be the RoH Champion,” she said definitively. “I think he deserves it. It’s very exciting to see what kind of impact we can make.”