Kevin Steen is coming to Toronto this weekend with one mission and one mission only: to become the new Ring of Honor World champion. And you know what? He might as well do it — just to prove Jim Cornette and Davey Richards wrong. 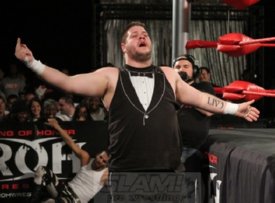 “It’s important to me because, no matter what he claims, I don’t think Davey cares about ROH or the title,” Steen told SLAM! Wrestling of the current Ring of Honor World champion. “And we have a lot of personal issues that need to get resolved once and for all.”

“Also, as far as the fans go, I think I can bring something different to the table as champion. I don’t think any past ROH champion was ever anything like me. I think I can make this thing relevant again.”

And wouldn’t it be a nice way to prove ROH management and Jim Cornette wrong?

“I really hate Jim Cornette. There’s few people I hate in life but I hate him. I hate him for how narrow minded and out of touch he is with what wrestling is today and what wrestling means to ROH fans. I hate him for being the reason a lot of my good friends aren’t in ROH anymore. I hate him for being the reason that a lot of people have a hard time recognizing ROH anymore. And I know there is no better way to get even with him for all this than to take the ROH title from his golden boy,” said Steen, who just turned 28 years old.

Having torn the roofs off with former partner El Generico from 2007 to 2009, Steen became involved in a hot rivalry with “The Generic Luchador” throughout the year 2010. But at the end of it, he found himself in an odd position — he lost a “Loser Leaves Town Match” and had to leave the company he invested so much in.

After putting pressure on ROH management, especially Jim Cornette, for over six months, after being the biggest outlaw ROH ever had, he was finally booked in a match last December against former friend Steve Corino. The outcome of the match was to decide not only his ROH status but also his future in wrestling. 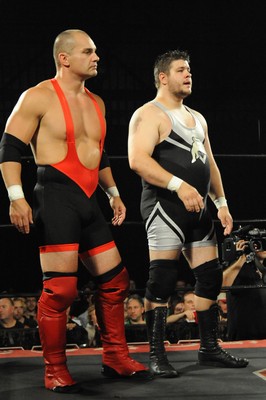 Lance Storm and partner Kevin Steen at a ROH show in Toronto in July 2009. Photo by Mike Mastrandrea

And, like he does more often than not, he won the match and got back what was rightfully his, a spot in the ROH roster.

Since then, he became one of the biggest stars in the company. Fans are raving about him wherever he goes. His matches are among the best night in and night out.

Isn’t it ironic that after a year-long absence in the ring, he became one of the most popular wrestlers in the history of the company?

“It feels good for sure but I always knew my potential. They’re the idiots that refused to accept it for such a long time,” said the native of Marieville, Quebec. “The only thing is I won’t consider myself the top guy until I’m the champion.”

ROH fans have not been used to such humility by “Wrestling’s Worst Nightmare” and it only shows how important this match is for him.

This will not be the first time Kevin Steen has a ROH title shot in Toronto. 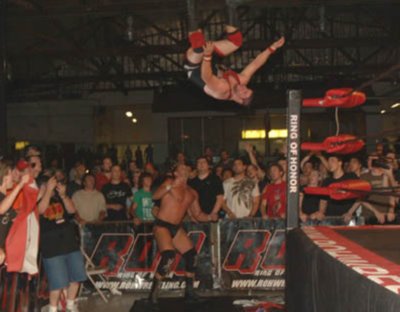 Back in July 2008 for the very first ROH event in Canada, he main evented the show against then champion Nigel McGuinness. Still today, Steen considered this match as one of the best he ever had, even though he was on the losing end of it.

Could this match with Davey Richards have the same potential?

“I think it could … I think the crowd will be just as electrifying … the match itself should be great … the only thing that could be better is the end result for me,” expressed the former ROH tag team champion.

This Saturday, the Ted Reeve Arena should be jam packed for this ROH iPPV called Border Wars.

What can the fans in attendance and at home watching expect from “Mr. Wrestling?”

“The fans can expect to see me give everything I have to give … leave it all in the ring.”

With Montreal not on the ROH schedule anymore (at least not since April 2009), Toronto has become Steen’s ROH new home and as a sports fan, playing home is always a plus.

“Absolutely, it’s the only Canadian city where ROH runs shows so it’s a big deal every time, for sure.”

Saturday, May 12, it’s going to be Game 7 for Kevin Steen, because you never know if an opportunity like this will ever present itself again.

Shall he fail, he’ll be back to square one.

But if he wins, it’s going to be 12 years of training, 12 years of paying his dues, 12 long years of wrestling all over the world finally paying off.

Like it or not, Cornette should get a good look at Kevin Steen when Steen walks down the aisle in Toronto. The man who just might be the next Ring of Honor World champion.

And if it happens, it will all have been worth it for Kevin Steen.