If we could be serious for a minute, Lance Storm wants it to be clear — the storyline Lance Storm is angry with Mike Bennett as their Ring of Honor feud continues this weekend on iPPV in Toronto, but the real-life Lance Evers is impressed by “The Prodigy” and is looking forward to their renewed battle.

“This is always where I get screwed on interviews because I can’t do them in character, in kayfabe,” Storm laughed down the line from Calgary, opening a free-flowing conversation that covered Storm’s students from his wrestling school and his role with Ring of Honor. 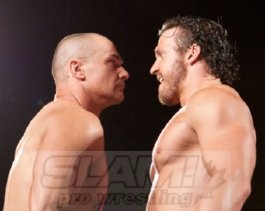 Lance Storm and Mike Bennett stare each other down at Ring of Honor’s Showdown in the Sun, on Friday, March 30, 2012 at the War Memorial Auditorium in Ft. Lauderdale, Florida. Photos by The Masked SLAM! Wrestling Photographer

But first up is Mike Bennett, the young motormouth that Ring of Honor’s Jim Cornette suggested to Storm as a possible opponent when Storm broached the idea of working a ROH show WrestleMania weekend in Miami — since he was going down anyway as one of Edge’s special guests for the WWE Hall of Fame ceremony.

Storm had heard of Bennett but hadn’t seen him wrestle.

“Because of my age, Cornette saw that there was a safety factor there, that he worked a more traditional wrestling style than some of the others,” the 43-year-old Storm said. “I watched a few of his matches online and said, ‘Absolutely, I can do something with this guy.’ We went from there. After everything went so well in Florida, I thought we had a really good match, worked together really well, that we decided to do it again in Toronto.”

The bout at the historic War Memorial Auditorium in Ft. Lauderdale, on Day 1 of ROH’s Showdown in the Sun [Richards retains, Steen gets unexpected help], was a back and forth affair, with Bennett coming out on top after a Box Office Smash and TKO.

Storm said that Bennett has impressed him. “I really enjoyed the time in the ring. He’s really technically sound, his timing is good, really impressed with the overall presentation of Mike Bennett.”

Unlike some of his indy bookings — and he is particularly choosy — Storm found that he had to push himself to keep up with Bennett, compared to “working down” to youngsters with less experience.

“That’s one of the reasons I like going to Ring of Honor, because it’s a situation where I’m not working down and walking through the paces. You really have to be on your game and push yourself, which I enjoy.”

Through his StormWrestling.com website, which has been running since 1999 (eons in web time), Storm often offers critiques of the WWE, TNA or Ring of Honor product.

Turns out he has a history of doing that behind-the-scenes as well, at least with former ROH booker Gabe Sapolsky, who would send Storm DVDs for consideration.

That was how Storm ended up working with Chris Hero in a ROH program two years ago, following a well-received ROH World Title challenge against Bryan Danielson at “Better Than Our Best” on April 1, 2006.

Hero “was someone who was still doing the comedy, superhero full body suit when I first started working with Gabe, in as far as offering critique and advice via DVD and stuff,” said Storm. “I’d give a lot of advice to Chris Hero, harped on him and working on him before I actually wrestled him, so I’d like to think I had at least a decent, positive influence on his career.”

With Danielson, er, Daniel Bryan, in the main mix on Smackdown, and Chris Hero working as Kassius Ohno in Florida Championship Wrestling (FCW) and poised to join the main roster, Storm can crow a little.

Another motivating factor is that the Border Wars bout with Bennett is in Toronto. Though billed from Calgary, Toronto has always been a favorite city for Storm: “my home away from home.” He grew up in North Bay, and went to university in Waterloo, about an hour from Toronto down the 401.

“Toronto is sort of my authentic wrestling home, especially considering when I was a kid growing up, all the live shows I went to were in Toronto. I did several WWE house shows at Maple Leaf Gardens, then obviously Mania 6,” he said.

The ROH show on Saturday is at the Ted Reeve Arena in Toronto’s east end, where Storm worked his two high-profile matches with Hero. On the “Death Before Dishonor VII” weekend, he teamed with Kevin Steen to defeat Hero and Davey Richards the first night, and was knocked out by Hero the second night.

Storm said that he enjoys being the veteran in the ROH locker room, sharing knowledge and wisdom when he can, or just joking around at fan fests. Back when he started, in 1990, Storm was able to learn from veterans such as Gerry Morrow, Johnny Smith, Gama Singh. Today, those veterans on the indy scene are few and far between.

As a trainer, with his successful Storm Academy in Calgary, that concerns him, and the lack of true education at some of the less reputable wrestling schools is equally worrisome.

“If they’re just taught how to bump and do moves, that’s all they’re ever going to learn, so they’re having to seek out other means by which to work with real veteran people,” he explained. “I would say probably a third of my students are people that were trained elsewhere, have some sort of experience, that have realized that, ‘I’m not learning how to work. I’ve hit a plateau.’ And they come to me, and I have to break the bad habits that they were taught, and then really teach them true pyschology so that they can start improving, because there aren’t enough people out on the indy scene teaching it — not in a seminar, but actually in the ring where you learn from.

“I was really fortunate with those guys that I worked with locally, and then I got booked overseas working with guys like Fit Finlay and Tony St. Clair and Dave Taylor, that I really learned my craft by getting my advanced training, if you will, on the job.” 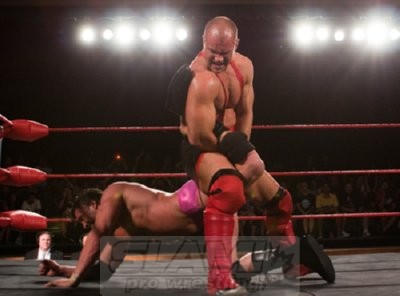 Keeping himself in great shape, Storm is able to get in the ring with his students. “That’s always been, I think at least, the strong selling point of my school is that I am the instructor, so when you first learn to tie-up, I’m the one tying up with you, and I am the one mat wrestling with you in the ring, and having matches with you, so you are learning first-hand.”

With some of his graduates, like Brandon Barker competing under the name Rodney Thomas, and Irena Janjic who is Leah West, having made their way to WWE developmental, Storm confessed that, while pleased with their success, he is mystified why some others have not been noticed.

“While I’m really happy for them, it’s probably not as much of a reward as you would think in that, I know that, kind of on the Harry Smith front, it’s not always indicative of the actual talent out there. I’ve got other students that haven’t been picked up yet that I think are absolutely fantastic. The fact that they’re a really great worker and a great guy and conduct themselves well, there’s a reward in that,” he said. “There’s been some people offered deals and signed to developmental that I didn’t think were as deserving as some of the ones that haven’t.” 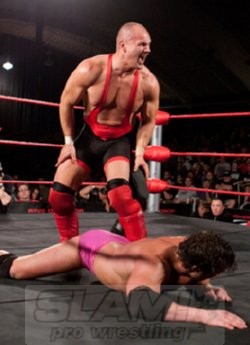 He brings up Mike Dalton (real name Matt Clement, wrestled as Mattias Wild). “I was really thrilled when he got signed to FCW, and he’s actually doing fairly well there now, because I always thought he had a ton of talent and is a really great guy. But again, there were some students of mine that I think were every bit as good as Mike, and everybody was hard-working, but they’re not there. It’s sort of out of my hands a little bit, whether they get signed and they get the rewards they deserve.”

The real reward, he said, is when he gets an email praising one of his students: “‘Hey, I just worked with one of your students in Texas. He was really good and a really professional guy. Good job.’ That in a way is more rewarding than, ‘Oh, they’ve got a deal in FCW,’ because the one, to me, is a more truer representation of I did a good job.”

Come Saturday, however, it will be Storm’s chance to prove that he can still be professional and do a good job in the ring against Mike Bennett.

But, with a warning, “The Canadian Icon” stresses it’s important to work in the storyline aspect of his bout with Bennett as well.

“So you just have to find a way to work in the ‘How dare he attack me after a match! I’m going to kill him in Toronto!'”