MONTREAL — A ToW show is always full of surprises, good or bad. Sometimes, it’s an awesome performance, some other times, it’s someone missing his flight. But every time, a ToW show is a very fun and entertaining evening, and ToW 9 was not an exception to that rule.

Saturday night in Montreal at the Centre Pierre-Charbonneau, Sylvain Grenier was supposed to wrestle Kevin Steen in a match built around WWE style versus Ring of Honor style. This was supposed to be a first-time ever match that hardcore fans in Quebec were very excited to see. 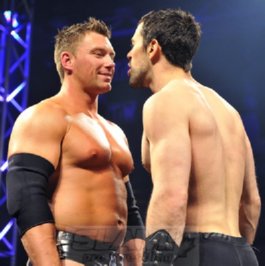 Sylvain Grenier stares down Samson in the main event, created when Kevin Steen could not get to Montreal. Photos by Minas Panagiotakis, www.photography514.com

Unfortunately, Steen had a booking on Friday night in Milwaukee, he was leaving Saturday, had a connection to Washington and from there, the flight was delayed over and over to the point Steen couldn’t make it to the show.

If it was unfortunate for Steen and the fans, it served someone else’s interest by giving another wrestler on the show an opportunity to wrestle the former four-time WWE tag team champion. To give Steen a chance to arrive, the match was bumped back to the main-event spot.

Stepped into the void was Samson, a young veteran on the Quebec indy scene who wrestled before for Top of the World (ToW), back in 2009, against Jay Lethal.

After eliminating himself from a battle royal and therefore, missing his chance to have a match with ToW champion Franky the Mobster, Samson challenged Grenier, who was still scheduled to face Steen at that point.

When it was time for the main-event, Samson saw an opportunity to make a name for himself by coming from the stands, climbing the big structure surrounding the ring, and challenged Grenier again.

ToW commissioner Marc Blondin told Samson, “If you want it that bad, you got it.”

It wasn’t an easy fight for Samson, as he had to go against not only an ex-WWE wrestler, but also a WWE HOFer in “The Mouth of the South” Jimmy Hart, who was managing yet another Quebecer. After the Fabulous Rougeau Brothers, Dino Bravo and The Mountie (Jacques Rougeau), he added Sylvain Grenier to his list of proteges.

Samson didn’t win the match, but surely did a hell of a job trying. After he tried — unsuccessfully — to choke Hart with his big hangman cable, he found himself in the hands of Grenier who finished him for the count of three.

“ToW fans, this is not the last time you’ll see Samson in this very ring. I have not said my last word yet,” told Samson to SLAM! Wrestling after the show.

There were already rumors floating around after the show about a rematch between the two, in what could become one of the best feuds of the year on the Quebec indy scene.

If Jimmy Hart played a big role in Grenier’s win, he was also involved in another great moment from the show.

After Rick Martel, Pat Patterson, Edouard Carpentier, Gino Brito and Paul Leduc, ToW chose to honor one of the most successful box-office attractions in the history of Montreal wrestling, the late Dino Bravo.

To receive the homage, his only daughter, Claudia Bresciano, 25, who was only six when her father got murdered in 1993, was presented to the crowd.

“You know the old saying, ‘My dad is stronger than your dad?’ Well, I’m sorry to tell you that, but you were all wrong, it was my dad the strongest!” said Bresciano to open her acceptance speech, after receiving a plaque from Bravo’s former manager.

“I’d like to thank the fans for still remembering my dad after 19 years. He would be proud. I love you dad!” said the young woman in closing. 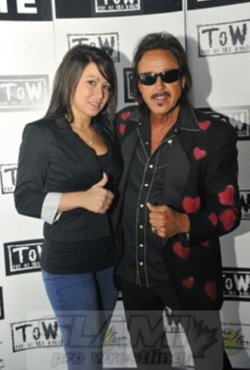 It was a very touching moment, well received by the 900 fans, that was preceded by a video recap of Bravo’s career.

“I had goose bumps watching the video and hearing the crowd react to it,” said Bertrand Hebert, a ToW booker and co-author of the upcoming book Mad Dogs, Midgets and Screw Jobs.

Two other former WWE Superstars were also on this stacked card.

Former WCW champion Vader was making his first appearance in Montreal since the infamous 1997 Survivor Series. In an handicap match, that reminded a lot of people the old Shotgun Saturday Night matches, Vader defeated his opponents, Handsome JF and Alextreme, with his Vader Bomb.

“It was a smooth match in front of a very lively crowd,” said Leon “Vader” White after the show.

The other Superstar was a more recent one, as “The Masterlock” Chris Masters was facing indy veteran, Sexxxy Eddy.

After unsuccessfully trying his finishing move, the Masterlock (basically a good old full Nelson) because Eddy had too much oil on his skin and was able to escape the move, Eddy didn’t have the same luck the second time Masters applied the hold.

Both were accompanied by some of the most lovely girls Montreal has to offer, but Masters and Eddy, oddly enough, asked their girls to retreat backstage before the match started.

“They were a distraction to me. Especially the tall one, I mean she’s real hot and she already told me I was gonna miss my flight in the morning. I can’t have these kind of distractions out there,” Masters joked after the show.

The strategy paid off, but SLAM! Wrestling cannot confirm whether he missed his flight or not.

The show was once again ring announced by JF Kelly, who did a tremendous job at it. On his Facebook page Sunday morning, Kelly wrote the following: “I have to share this, I’m too please about it… A huge thank you to Pat Patterson, who complimented my work at ToW 9… That made my year!”

Indeed, WWE HOFer Pat Patterson, a good friend of promoters Marc Blondin and Sylvain Grenier, was in town last night and made sure to stop in and watch the show in his native Montreal.

In the other matches, Darkko won a battle royal to earn a shot at Franky the Mobster’s ToW title, Dru Onyx and Eric Mastrocola (formerly the head trainer at Jacques Rougeau’s school) won the vacant tag team titles against Mathieu St-Jacques and Thomas Dubois, and Franky the Mobster retain his title against the giant Darkko in what was probably the match of the night.

The next show at Pierre-Charbonneau Center in Montreal is scheduled for Friday September 21st, but no matches have been announced. There is also a show set for July 14th at the beach in Pointe-Calumet with Koko B. Ware.