The 2012 Future Legend award winner at the Cauliflower Alley Club reunion is not extremely well-known outside of the south yet, but Kyle Matthews is looking to change that. Or maybe not.

For one, he’s made it to a few shows for one of the bigger, more respected indy promotions that runs on a larger scale, but it’s under a mask. So we’re not to talk about that aspect of his burgeoning career.

But that’s only a small aspect of the already large and growing career of 24-year-old Kyle Matthews of Georgia. 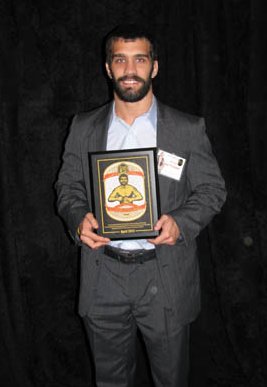 Matthews started training when he was 15 years old in a Rome, Georgia garage, with wrestler Sharp Dressed Man (Russell Wiggins), but it wasn’t until he hooked up with “Nightmare” Ted Allen (Ted Lipscomb) when he was 19 did things really start falling into place.

“He started taking me on the road and stuff,” said Matthews. “I helped him put up rings, and he would get in the ring with me before shows and I’d workout with him. He was an awesome guy.”

When Allen died suddenly on August 19, 2010, it was Matthews who was scheduled to meet up with his trainer for a trip, and who notified Allen’s girlfriend that something had to be amiss.

A regular gig was for Rampage Pro Wrestling, and Matthews stepped back into the ring a week after Allen passed.

“The emotion, it kind of turned a corner for him,” said Jimmy Rave, who books Rampage Pro Wrestling. “He was just holding back on some emotions and there was a lot of raw emotion there. Ever since then, he’s said it to me, he’s felt like Ted’s been in the ring with him. I told him that it might be true, but don’t take anything away from his own abilities and the things that he can do on his own.” 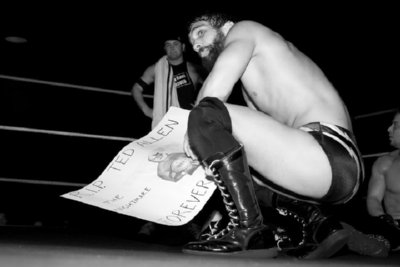 The 5-foot-9, 175-pound Matthews has put in some matches with Ring of Honor, Evolve/Dragon Gate USA, was in the 2008 CHIKARA Young Lions Cup, and done a tour with Zero One in Japan.

It has all lead to a hybrid style, he explained. “I think I’m a mixture of styles, because Ted was very old-school, but I’ve also been to Japan, which is quite the opposite to that. I think I have a mixture of styles. Also, I have some lucha as well. Quite a different array of things there.” 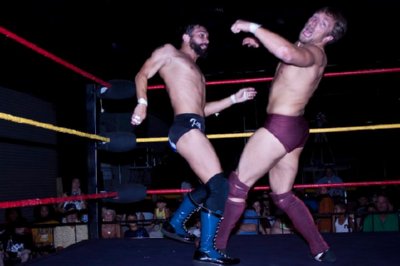 One of his career highlights so far was working on the final show at the ECW Arena in Philadelphia in January 2012, where Jon Davis pinned Matthews in an Evolve event.

“I wasn’t a huge ECW fan, but just all the independent shows that have happened there I’ve been following. So to wrestle on the last show there was amazing. It was an interesting night for sure,” Matthews said. “There was a CZW show in the afternoon, and that was a whole different style than the Evolve show. Just seeing all the different styles and all the old ECW guys that were there made for an interesting group of people in the back.”

Evolve booker Gabe Sapolsky admitted he has his eye on Matthews, who will be on the May 12th Evolve show in Concord, NC. “Kyle is definitely a young talent ready to break out,” said Sapolsky. “He has been a stand out in the Atlanta area, now I’m really interested to see how he does against new opponents in new promotions. I am very intrigued by his skills and I look forward to seeing more of what he brings to the table.

Another highlight was Japan, where he spent time in the Zero One dojo. “It was brutal. Training was no joke. Lots of squats, lots of pushups, lots of situps. The work was totally different too, a much stiffer style than here.” 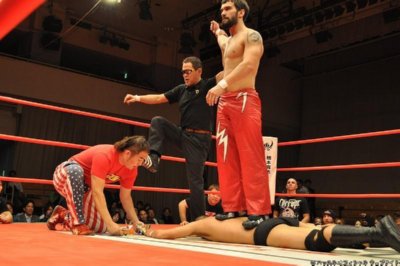 Besides Allen, many of the other Georgia legends are fans of Matthews. The georgiawrestlinghistory.com website has given him the Tim Woods Award for the Best Technical Wrestler in Georgia in 2009 and 2010. The oldtimers have gotten him out to a Gulf Coast Wrestlers Reunion in Mobile, Alabama, and to his first Cauliflower Alley Club (CAC) reunion in April.

“Kyle has all the tools too be a star except the size. If he were bigger the sky would be the limit,” said veteran Georgia referee Bobby Simmons. “I have tried to tell him to pace himself. The body only has so many bumps in it and he is going any and everywhere. The weekend of CAC he drove to NJ for a show on Friday night back to Ga for Saturday, and worked Sunday afternoon a hundred miles south of Atlanta before catching the 10:30 p.m. flight to Vegas. Ted Allen trained him well and only the Good Lord knows what his limits are.” 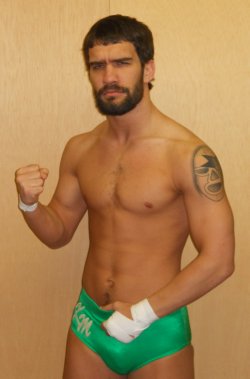 Jimmy Rave has helped polish Matthews’ skills and wrestled him a ton, including the 2010 NWA Rampage Pro Wrestling Match of the Year (Kyle Matthews vs. J-Rod vs. Jimmy Rave vs. Bryan Danielson), and in a TNA dark match.

“His timing is amazing. He’s very respectful. He’s very humble. He just has this ability to absorb from everybody that he works with. I think that’s a very good thing,” said Rave. “He’s not selfish. He’s a workaholic. He tries to do whatever he can to make the match good, not just himself.”

Indeed, Matthews is not one to brag at all, and is quick to give credit to others.

“Jimmy Rave has helped me out a ton, because he knows lots of guys up north from his time in Ring of Honor. So he’s helped me out a lot in getting bookings. That’s how I first got in touch with Quackenbush for CHIKARA, was through Jimmy,” said Matthews. “Ted was a big help too, especially in the south, because he knew everyone. He was a big help. Facebook actually helped out a lot, and Twitter.”

Wrestling up to four times a week, Matthews, a graduate of the film and video program at Georgia State (Class of 2009), fits in the gigs around his day job, doing inventory for the local school system.

The CAC’s 2012 Future Legend award is just the latest feather in his cap.

“I think it’s going to be a great help, just because it’s such a recognized group,” Matthews concluded. “I think a lot of people will recognize it and will keep me going higher.”