Steiner on TNA: ‘It’s not like Hogan and Bischoff are going to grow a brain’

Scott Steiner has never been afraid to speak his mind.

So when the former WCW Champion parted ways with TNA in March, he wasted little time letting loose on his former employer, namely the three men in charge of the ship: Hulk Hogan, Eric Bischoff and Bruce Prichard.

“These guys are just real pieces of s—, man,” Steiner told SLAM! Wrestling. “They just screw with everybody and I got sick of it. I just said f— it. I’m not going to stand on the sinking ship like I did with WCW and watch all this bulls— that they did before, I’m watching it again.” 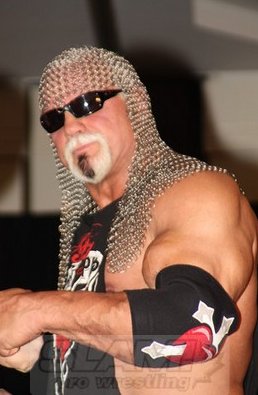 Scott Steiner in action in January 2012 in Los Angeles. Photo by Christine Coons

Now as Steiner prepares for his HPW Canadian Heavyweight Championship match Saturday against Jeremy Prophet at the Smiths Falls Memorial Community Center in Smiths Falls, Ontario, he is looking to become the voice of the voiceless — namely the talent currently in TNA who can’t speak out about what he feels the company has become under Hogan, Bischoff and Prichard.

“Enough’s enough,” Steiner said. “I was going nuts, man. They treat everybody like s—, disrespect everybody and I had to get out of there. Now I can have a voice for those guys who are still there and tell the truth about them and hopefully people will start realizing what’s really going on there. They have buffaloed everybody. They’re like con artists, and they’re good at it, but the ratings do not lie. Wrestling’s always been about ratings, so why aren’t they important now?”

Steiner’s referring to TNA’s declining ratings, which have tumbled below the 1.0 mark some weeks when the shows had been doing regular 1.2 ratings in the past. As someone who was with TNA prior to January 2010, when Hogan and Bischoff came in, Steiner said he is sad to see them run off the audience they worked hard to create.

“Once you run these people off, it’s going to take forever (to get them back),” he said. “They don’t understand that, but I’ve seen it. Once you piss these fans off, then it’s too late. It’s really close to that point. Look at the ratings for the last TV before (Lockdown). It was horrible. It was abysmal. Are you kidding me? What’s going to cause panic in these people? … These guys have a track record, man. They ran WCW into the ground. You don’t think they’re going to do the same to TNA?”

TNA declined to make Bischoff available for this story.

“The embarrassing thing is they’ve been there for almost two-and-a-half years now and they did this pay-per-view in Nashville, where TNA is based out of, and they gave a bunch of free tickets away and they could only get 2,500-3,000 people,” Steiner said. “That’s an embarrassment. If they aren’t freaking out, if they aren’t panicking, what’s going to make them panic? It’s not like Hogan and Bischoff, after two-and-a-half years, are going to grow a brain. I’ve see these guys operate before. Hogan thinks he’s bigger than the sport, and if that was true, he’d be able to draw a rating, but he can’t. He can’t draw a rating. Sure, if you mention wrestling, the name Hulk Hogan comes up, but put him in the ring and he’s not going to draw you s—. He thinks he’s bigger than the sport but he’s not. And he still thinks that and that’s why the ratings are down. No matter what he does, if he gets a rating, he will never bring TNA back. He’s an old piece of s—, man.”

Steiner wants to make one thing very clear: He does not hate TNA. In fact, he wants TNA to succeed. There’s no doubt professional wrestling was at its best in the mid-to-late 1990s when the WWF was running neck-and-neck with WCW with ECW making waves as well.

“I wish TNA would work,” he said. “Two wrestling organizations is good for wrestling. I wish it would work, but with those guys in charge, there’s no way. I’ve seen their history and it’s not going to happen.”

Talent not allowed to speak with Carter

One of the biggest problems the company has right now, Steiner says, is how Hogan, Bischoff and Prichard have sealed off any access the talent had to TNA president Dixie Carter.

“She doesn’t really know what’s going on. So if you try to call Dixie, try to contact her, you get reprimanded, you get in trouble. They try to wall her off. I don’t understand how she can turn her back on the guys who built the company up to the ratings that they were and these guys come in and bury the ratings, take TNA to an all-time low and she’s listening to these guys? It’s crazy. It’s crazy. That’s the only way I can put it. It’s unbelievable. You can ask anybody who’s been there. You haven’t heard one denial of what I’ve been saying from those guys, because they can’t deny it.”

Of late, one of the biggest points of contention is the push of Bischoff’s son Garett, who has received considerable amounts of TV time despite extremely limited experience, something Steiner calls “insulting.”

“Bischoff comes in and tries to push his stupid-ass son who’s only had 10 matches. I mean, come on man. The guy can’t even throw a clothesline,” Steiner said.

“It’s not insulting just to me, it’s insulting to everybody in that locker room. It’s bulls— because the guy cannot wrestle. He’s had less than 10 matches, but the thing is, I’ve seen this before. It happened in WCW when he tried to push (Ric) Flair‘s son and he was just as bad. He had just as much experience and couldn’t do anything. Where’s David Flair at today? Nowhere. And it’s going to be the same thing. It’s ridiculous. How can you keep on repeating bad history? Dumb motherf——.”

Many thought TNA would be set in the right direction when long-time head writer Vince Russo lost power late last year and then left the company in February. According to Steiner, Russo wasn’t the problem, but was made a scapegoat in the minds of many for the company’s struggles.

“Think about it. He was definitely the scapegoat,” Steiner said. “He was trying to write his stories and Bischoff, Hogan and Prichard were changing everything. You think Russo would be pushing (Garett Bischoff) right now? Come on, give me a break. He was definitely a scapegoat. I don’t blame him for leaving.”

Steiner also had strong words for Hogan after Hogan, in Steiner’s eyes, continually buried TNA talent during radio interviews, including memorable interviews slamming both A.J. Styles and Bobby Roode in the lead to Bound For Glory. But one particular incident stuck in Steiner’s craw more than any other: When Hogan slammed Kurt Angle during a September interview on Sirius/XM Radio’s “Busted Open,” claiming, among other things, that Angle’s former wife Karen didn’t allow Angle to drive their children because he was such a poor driver.

“I think the one that pissed me off the most is when he attacked Kurt Angle, not only professionally, but he did it personally,” Steiner said. “The craziest thing is he said Kurt Angle has two left feet. I mean, come on. The guy’s an Olympic champion, are you kidding me? Then he crossed the line and attacked Angle’s family personally. I know his kids, they’re great, they’re beautiful kids. Of course, Karen (Jarrett) ripped him a new a–hole and all he could say was, ‘Oh, I’m sorry, I got tongue-tied.’ Tongue-tied? Are you crazy? That’s the thing, Hogan is like a pull-string doll. You pull the string and if he isn’t saying, “Take your vitamins and say your prayers,’ or ‘Brother, brother, brother’ or ‘Whatchu gonna do?’ he sounds like a complete idiot.

“After Karen did that and ripped him, everyone thought Kurt was going to kick his ass. So I’m actually in the locker room. It’s me, Sting and Kurt and Hogan comes in and his hands are shaking worse than a Parkinson’s patient feeding birds at the park. He’s standing by the door and he won’t come in. Like he’s going to run from Kurt. He must’ve asked Kurt like five times, ‘Hey, are we cool?’ Kurt’s blowing him off because Kurt’s so laid back. He doesn’t really give a s— what Hogan says. I asked him after and we all started laughing, like ‘What a f—— c—.’ He has the balls to say that on the radio and he’s scared, his tail goes between his legs and he walks away. It was laughable. But that’s Hogan.”

What ultimately irks Steiner is the fact that, as he said, he’s seen this in action before when WCW took a steep decline and was eventually sold to Vince McMahon in 2001. Steiner would very much like to have a positive attitude about TNA, a company he spent five years of his career with, but it’s far too difficult to do so.

“There’s nothing positive to say about TNA. I’m not being negative. It’s the truth,” he said.