TOLEDO, Ohio — The last time WWE came to Huntington Center, for a Smackdown taping in Sept. 2011, the attendance was all-time bad, as less than 3,000 people attended the taping.

Tuesday was a different story, as fans filled much of the building and were loud and almost oddly enthusiastic at points for the combined NXT/ Superstars/ Smackdown taping. 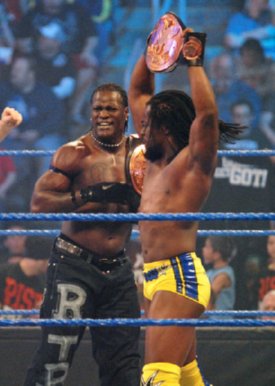 After a dark match that saw Dean Ambrose dispatch of former Intercontinental Champion Ezekiel Jackson, NXT began and it was there that it became clear this was a different crowd. When Alex Riley’s music hit for a tag team match where he teamed with Tyson Kidd to face JTG and Johnny Curtis, the roof might’ve blown off the building. Riley was so much more over than his level of television time would indicate that it was nuts. There were chants for Riley during the match, which might’ve been the best of the taping.

All four had their working shoes on for the match, a long, exciting affair that makes this week’s NXT a must-watch.

The only real snoozer of the evening was the NXT main event between Michael McGillicutty and Percy Watson. The match had no heat and neither competitor, especially McGillicutty, who was on offense much of the match, could do anything to change that. The match was too long and received a few scattered “boring” chants.

Just one match was taped for Superstars as Jinder Mahal clashed with The Great Khali. This was another one of those matches where the crowd reaction made you scratch your head. Khali got a gigantic reaction coming out with thunderous “Let’s Go Khali” chants during the match.

From there, it was on to Friday Night Smackdown, which opened with a bang, as Sheamus met Daniel Bryan in a non-title rematch of Sunday’s excellent match at Extreme Rules.

The newly-minted WWE Tag Team Championship duo of Kofi Kingston and R-Truth met Hunico and Camacho in tag team action. The match was high on action.

After beating Dolph Ziggler on Sunday at Extreme Rules, Brodus Clay faced off with Ziggler’s teammate Jack Swagger. The match, as you would expect, was on the short side. Later on in the taping, Clay’s disco ball lowered again from the ceiling and Swagger came out demanding a rematch. The rematch, which likely is a re-tape, was even shorter than the original, which featured Ziggler taking another must-see bump.

Instead of the long-awaited debut of Damien Sandow, we got another promo from him (which was rather awesome) before Ryback faced NXT’s Derrick Bateman. Ryback once again was greeted with “Goldberg” chants.

The main event of the show played off an angle setup earlier in the show, so I’ll forego mentioning that to avoid any possible spoilers.

In the post-show dark match, Kane met Orton in a street fight. The match wasn’t too long. They brawled along the ringside area, including on the announce table. When they got back in the ring, it was Orton who picked up the win with the RKO.

This show, from both a crowd and in-ring perspective, blew away the last time WWE was in Toledo. The show was fun all the way through (minus the NXT main event) and certainly had to leave a good taste in the mouths of those in attendance.

No return date was announced.