“It’s an amazing and joyful experience; it’s like being a little boy on a Christmas morning. To be able to create artwork for me is like a gift to me.”

This simple statement is how artist and lifelong wrestling fan, Terry Leavitt sums up his feelings about creating art. What is unique about Leavitt beyond his passion, eloquence and talent, is that he draws each piece of art using his mouth. 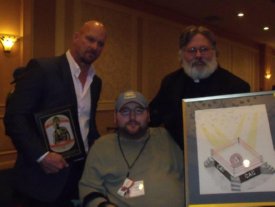 At the age of 20, the New Brunswick native had a life altering swimming accident in which he broke his C-4 and C-5 vertebrae that left him a quadriplegic. The recovery was difficult, but one day in rehab his recreational therapist asked him if he had any hobbies before his accident. When he mentioned his passion for drawing, she grabbed a paint brush and Leavitt tried painting with his mouth. Unsatisfied with painting, the therapist gave to Leavitt a pencil crayon and after a few days he had finished his first new piece of art.

Leavitt has been drawing since he was a little boy and while he had taken some art classes in school prior to the accident, much of it was self-taught. When asked to describe what impact the accident had on him as artist he described it as not having the huge impact that others might think. “It never really changed anything, I just knew I wanted to excel at it because it was the only thing I had that I could do before my accident also. I decided to be an artist when I was 21 after my accident as soon as I found out I could still do the one thing I loved: To draw.”

At the age of eight, Leavitt was first exposed to professional wrestling by his grandfather. “My grandfather and I would watch it when it was just the hour show on Saturday mornings.”

The earliest memory of professional wrestling he can remember was when Hulk Hogan body slammed Yokozuna, which is also a picture he would like to draw in the future. Unfortunately, Leavitt has only had the opportunity to see one live wrestling match, which was Batista versus Kane. “I am from a small town that can’t attract big shows like this.”

His artistic influences have been local artists and friends including Gary Dufour, Sadie Richard, Deb Lapointe and his sister Stacey Suhaianu. However, the hard work of professional wrestlers has also influenced Leavitt as an artist. “Their work ethic in the ring should rub off on all of us! Meeting them in person to find that they are gentle giants taught me even more about never giving up.”

His favourite medium to create art in has been pencil and charcoals. “I like to use an HB, 2B, 4B, 6B and Charcoal. Actually I’ve been wanting to paint for awhile. Just have to wait for someone to help and give me some pointers on how to load the brushes right and so forth.” 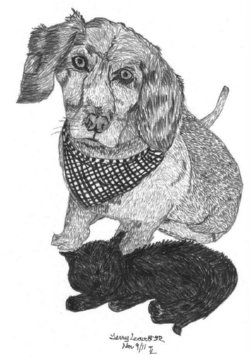 Leavitt describes his artistic style as unique and challenging. “Not many could draw the way I can pulling into an easel board that is only inches away from your face and then putting a pencil in your mouth.”

The research process is one that can involve a great deal of time for an artist. However, Leavitt has reached the point where he is able to be very efficient. “Either someone will email me a picture or tell me what they want, then I would Google the picture they want, study it for 20 minutes or so. Then figure out what pencils and supplies like smudgers, erasers, etc I would need. Then I’d get into my easel board and draw away.”

Some of his favourite pieces have been of wildlife, including eagles, wolves, deer, moose, and household pets such as cats and dogs. He has also designed tattoos, animation and feels he is improving with his portraits. “I am most proud of my wildlife pictures cause of the detail I can put in them. The portraits are most difficult. If you don’t get the eyes or features of the face just right it’s not going to look like that person.” 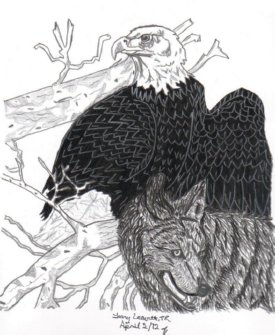 One piece that Leavitt created back on November 29, 2010 was two images of eagles, one in the foreground and one in the background, which had a very advanced level of detail and technique. Leavitt relayed that creating it was a step-by-step process. “Well, first I would draw the outline of the eagle. Then draw the eyes and detail to the face, head and beak. Then for the body I would shade it in with my darkest charcoal I have, then take a smudging stump to blend it to and even shade of black. Then I would use a white charcoal pencil to add the light to the body and feathers/wings of the bird. My inspiration on eagles is that they symbolize freedom — something that I haven’t got too much of until I’m up in my wheelchair.”

His work has been exhibited at the Ability New Brunswick Art Auction and the recent Cauliflower Alley Club reunion held this year in Las Vegas, Nevada.

“I got involved with the CAC through a good friend Cory Morrow who heard of the CAC needing artwork to auction; so he got a hold of [CAC executive] Morgan Dollar and the rest is history. It was an honor as a fan to create a piece for wrestlers I grew up watching. I took great pride in it to be asked alone. The inspiration was from them to symbolize the fallen heroes or wrestlers or brothers. It sold for $450.”

Leavitt was in attendance at the CAC reunion this year where he had the opportunity to meet Ted DiBiase, The Destroyer (Dick Beyer), Butcher Vachon, Ricky Steamboat, Harley Race, JJ Dillon, Sgt. Slaughter, “Stone Cold” Steve Austin, Ivory, Jim Ross, Wendi Richter, Hollywood of GLOW, Al Friend, and Bill White. “Every one of them inspired me; to hear their stories of traveling thousands of miles for a $75 pay day.” 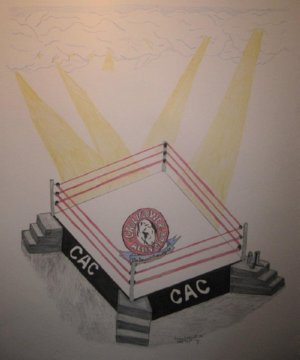 The artwork that Terry Leavitt created for the Cauliflower Alley Club reunion.

Out of those at the CAC reunion, Leavitt particularly connected withAustin and DiBiase. “Ted really listened to my story of my accident and when I was done he said wow and told me I was the true champion and I inspired him, this floored me. Then Steve and I could relate; we had both had a neck injury in the C3-C4 vertebrae. Then he mentioned me in his acceptance speech telling that I drew him using my mouth and said it was fans like me why he loves the business.”

When receiving the CAC’s top award, the Iron Mike Mazurki Award, Austin used Leavitt as an example of one of the real benefits he got from the wrestling business.

“He drew a picture of me in the ring and he drew a picture of me drinking beer with his mouth. Terry’s a quadriplegic, and he came all this way, my guess to be here, but to see me, hang out,” said Austin. “We got a chance to talk. I guess what I’m trying to hem-haw around, the best thing that I ever got out of this business was touching people’s lives. For a guy to come here all this way, and to say that to me, means everything in the world to me.”

Leavitt was also the artist for a children’s book called The Colors of Karlee that was published locally in New Brunswick. “The story is about a butterfly that thinks she is not a butterfly. She starts getting color in her wings as she feels different emotions, they change color for each emotion she experiences. A good friend Shirley Blanchard wrote it and she explained what she wanted drawn.”

Recently, Leavitt received a scholarship from the Art Institute in Minnesota, which is an opportunity he is happily anticipating. “I’m most looking forward to learning how to shade objects better; this will allow me to do landscapes. I’d like to get more into portraits in more detail.” 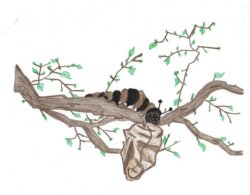 Leavitt was also presented with the 2009 the Ambassador of the Year Award from Ability New Brunswick, the Canadian Paraplegic Association Ambassador of the Year 2008-09, and received a Plaque at the Stan Cassidy Rehab Center, McCain wing in Fredericton, New Brunswick. When asked what it means to be an inspiration to others, Leavitt admitted that it wasn’t something that really goes through his mind. “I just live my life to the fullest each day and if that helps brighten somebody’s day, I’m honored they would look at me in that way.”

In terms of future ambitions Leavitt is focused on finishing his art school training, making a living as an artist, and trying to win the National Mobility Awareness Month’s Life Moving Forward Contest, whose prize is a new mobility van.

“The contest is meant to raise Disability Awareness for disability awareness month. There are three vans and those with the most votes get their story read to see who wins. The promo code is 547 or 971 and you can vote once every 24 hours. This would mean the world to me as my van is falling apart and a new one would cost me $50,000 all done over.”

Matthew Byer lives and resides in Victoria, BC, where he works as a Business Analyst. He thinks Terry Leavitt is a tremendous artist and person and hopes everyone who reads this article takes the time to vote for him in the National Mobility Awareness Month’s Life Moving Forward Contest.